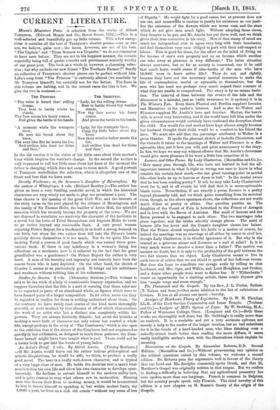 Discussions on the Gospels. By Alexander Roberts, D.D. Second Edition.

(Macmillan and Co.)—Without pronouncing any opinion on the critical questions raised by this volume, we welcome a second edition. Dr. Roberta puts the arguments well in favour of the theory that our Lord and His disciples commonly spoke Greek, and that St. Matthew's Gospel was originally written in that tongue. But we confess to finding a difficulty in believing that any agricultural peasantry has ever spoken more than one language. French is common in Belgium, but the country people speak only Flemish. The chief novelty of this edition is a new chapter on M. Renan's theory of the origin of the Gospels.