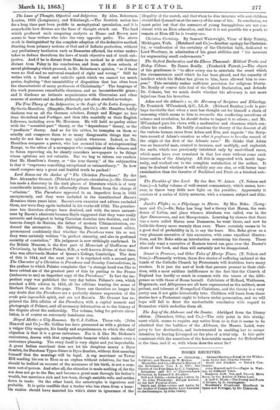 The Laws of Thought, Objective and 'Subjective. By Alex. Robertson.

London, 1864 (Longman), and Edinburgh.—The Scottish nation has for a long time past been prolific in metaphysical speculation, and it is remarkable how diverse are the lines of thought struck out. The land which produced such unsparing analysts as Hume and Brown now seems to bear writers who take the very opposite paths. The above work is distinguished by the complete adoption of the deductive method. Starting from primary notions of God and of Infinite perfection, without ;Any preliminary hesitation such as• Descartes affected, the writer under- takes to deduce therefrom the laws of truth objective and of troth sub- jective. And if he is distant from Hume in method he is still further distant from Paley in his conclusions, and from all those schools of moral philosophy which proceed, in Mr. Robertson's opinion, "as if there were no God and no universal standard of right and wrong." Still he writes with a liberal and catholic spirit which we cannot too much praise, deploring "that nnamiability of disposition that has often been the characteristic of many professors of Christianity." The language of the work possesses remarkable clearness, and no inconsiderable grace ; and it discloses an intimate acquaintance with Ciceronian and other sources of ancient and modern philosophy not often studied nowadays.