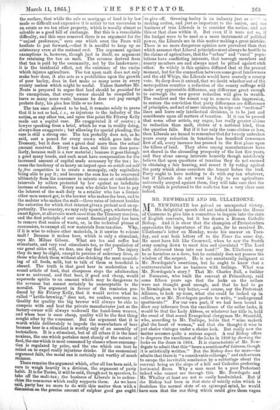 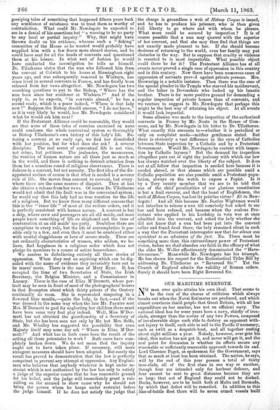 MR. NEWDEGATE has gained an unexpected victory. His delightful speech did not indeed induce the House of Commons to give him a committee to inquire into the state of English convents, but it has drawn a Roman Catholic Bishop. And it is clear that the champion of Protestantism appreciates the importance of the gain, for he received Dr. Ullathorne's letter on Monday, wrote his answer on Tues- day, and sent both letters off to the Times the same day. He must have felt like Cromwell, when he saw the Scotch army coming down to meet him and ejaculated "The Lord hath delivered them into our hand !" Dr. Ullathorne may be as harmless as a dove, but he certainly does not possess the wisdom of the serpent. He is not unnaturally indignant at Mr. Newdegate's assertions, but he ought to know that a controversialist has no business with feelings. What was Mr. Newdegate's story ? That Mr. Charles Ball, a builder at Nuneaton, who built the convent at Princethorp, said some fifteen years ago that the locks on the cellars were not thought good enough, and that he had to go to Birmingham to buy better,—of course, say the Protestant Alliance, to lock up nuns, what else could be locked up in cellars, or as Mr. Newdegate prefers to write, " underground apartments ?" For our own part, if we had been bound to draw any inference from the excellence of the cellar locks, it would be that the Lady Abbess, or whatever her title is, held the creed of that sound Evangelical clergyman Mr. Stumfold, who, according to Mr. Trollope, holds that " wine maketh glad the heart of woman," and that she thought it wise to put choice vintages under a choice lock. But really now the matter assumes quite a serious aspect. A real Bishop offers to disprove the excellence of the locks in 1850 by showing the locks on the doors in 1864. It is characteristic of Mr. New- degate to admit that this "bears a semblanctrof fairness, though it is artistically written." But the Bishop does far more—he admits that there is "a considerable cellarage," and endeavours to escape the inevitable conclusion by a subterfuge about the convent being on the slope of a hill and Catholics preferring horizontal floors. Why a man must be a poor Protestant indeed who cannot see through this. Mr. Newdegate and Mr. Whalley at least are not so easily hoodwinked. But if the Bishop had been in that state of saintly calm which is doubtless the normal state of an episcopal mind, he would have seen that the one thing which could give these vague gossiping tales of something that happened fifteen years back any semblance of substance was to treat them as worthy of contradiction. What could Mr. Newdegate be expected to see in a denial of his assertions but " a warning to be no party to any local or partial inquiry." Why, that might have thrown doubt on his evidence, whereas such a " fishing" committee of the House as he wanted would probably have supplied him with a few dozen more absurd stories, and lie could have sent for all the heads of convents and questioned them at his leisure. In what sort of fashion be would have conducted the investigation he tells ut himself. Dr. Ullathorne states that the nun who followed him from the convent at Col wich to his house at Birmingliani eight years ago, and was subsequently removed to Winburn, has since lived in several convents in France, and has finally been released from her vows altogether.. Mr. Newdegate has two searching questions to put to the Bishop, " Where has the nun been since her residence at Winburn ?" And if the reply is, as he expects, " in convents abroad," he has a second ready, which is a poser indeed, " Where is that lady now Suppose the Bishop should answer, " I do not know," as it is very likely he would, has Mr. Newdegate considered what he Would ask hini next?

If the Protestant Alliance could be reasonable, they would see that none of these tales of coercion exercised on. nuns could condemn the whole conventual system so thoroughly as Bishop Ullathorne's own history of this lady's life. En- tering a convent at an early age, we find her dissatisfied with her position, but for what does she ask? A severer discipline. The real secret of conventual life is not vice, not crime, but pettiness. The jealousies, the meanuesses, the vanities of human nature are all there just as much as in the world, and there is nothing to distract attention from them but a ceaseless round of religious observances. There is dulness in a convent, but not serenity. The first idea of the dis- appointed recluse of course is that what is needed is a severer rale of life. She moves from convent to convent, but every- where there are the same sources of disquiet. • Then at last she obtains a release from her vows. Of course Dr. Ullathorne would not admit that the fault was in. the conventual system; he would say that this lady had no true vocation for the life of a religious. But we know from many different sources that this is the " inner life " of most of the recluse orders, and it is perfectly consistent with human nature. A convent is, but a ship, where crew and passengers are all old maids, and most people know something of life on shipboard and the tone of conversationdt an old maids' tea-party. Doubtless there are exceptions to every rule, but the life of cOntemplation is pos- sible only to a few, and even then it must be combined either with mental sluggishness or love of severe study. These are not ordinarily characteristics of women, who seldom, we be- lieve, find happiness in a religious order which does not pledge its members to a course of active benevolence.

We confess to disbelieving entirely all these stories of oppression. When they rest on anything which can be dig- nified with the name of evidence they invariably 'turn out to be mares' nests. There is the case of Mary Ryan. Ii has occupied the time of two Secretaries of State, the Irish Secretary, the Belgian Minister, and a Commissioner in Lunacy. There is the ease of Eliza M'Dermott, whose por- trait may be seen in front of most of the photographers' houses in that Brompton about which thirty priests of the Oratory continually do roam. She is represented simpering 'in a flowered blue muslin,—quite the lady, in fact,—and if she was- dressed in the same way when the late Mr. Paynter sent Mrs. M'Dermott to gaol for neglecting her children there must have been some very foul play indeed. Well, Miss M'Der- mott has not obtained the guardianship of a Secretary of State, but she has been seen not only by ?sir. but Mrs. Selfe, and ifs. Whalley has suggested the possibility that even Majesty itself may some day ask " Where is Eliza M'Der- mott ?" And what has in both cases been the result of the setting all these potentates to work ? Both cases have com- pletely broken down. We do not mean that the inquiry ought not to have taken place. If necessary, still more stringent measures should have been adopted. But surely the result has proved to demonstration that the law is perfectly competent to prevent any attempt at oppression. Any English- man who believes that anybody whatever is kept under re- straint which is not authorized by the law has only to satisfy a judge of the superior courts that he has reasonable ground for his belief, and the judge will immediately grant a rule calling on the accused to show cause why he should not biing the person whom he keeps under restraint before the judge himself. If he does not satisfy the judge that the charge is groundless a writ of Habeas Corpus is issued, and he has to produce his prisoner, who is then given full liberty to go where and with whom he pleases. What more could be secured by inspection ? It is of course possible that a nun may quarrel with the superior of her convent, and that she may then find that things are not exactly made pleasant to her. If she should become desirous of returning to the world, even her family may, put obstacles in the way. But to suppose that cruelty or violence is resorted to is most improbable. What possible object could there be for it ? The Protestant Alliance has at all events never proved a single ease of oppression in this country and in this century. Now there have been numerous cases of oppression of servants proved against private persons. Mrs. Brownrigg is a notable instance. Then there was the case of the special pleader in the Temple who starved his maidservant, and the baker in Deionshire who locked up his lunatic brother. There is far more positive ground for demanding a regular inspection of private houses than of convents, and we venture to suggest to Mr. Newdegate that perhaps this might be the best way of 'attaining his object: ' At all events it would look impartial. - Some allusion was made to the inspection of- the authorized convents in France by Mr. Neate in"the House of Com- mons, and by Mr. Newdegate in his letter to Dr. Ullathorne. What exactly this amounts to—whether it is periodical or only on complaint made—neither geitleman stated. But there is obviously a vast difference in the eyes of Catholics between State inspection by a Catholic and by a Protestant Government. Would Mr. Newdesate be content with inspec- tion by Catholic laymen ? But Newdegate deinand" for inspection altogether puts out of sight the jealousy with which our law has always watched over the liberty of the subject. It does not at all follow that inspection is needed: here because it is needed abroad, or that abuses which are possible amid a Catholic population are also possible amid a Protestant 'popu- lation, always on the watch to expose a Papist: Is it by a Tory county member that we are to be told that one of' the chief peculiarities of our glorious, constitution is but a frail succour, and that the boast of Englishmen, the writ of Habeas Corpus, has lost its pristine virtue? Et to New- degate And all this because Mr. Justice Wightma.n would not interfere to release a nun till somebody had asked. to see her and been refused, and because when the zealous Pro- testant who applied to his Lordship in vain was at once admitted into the convent, and asked the lady whether she did not know that a nun had been put into the convent cellar and found. dead there, the lady remained silent in such a way that the Protestant interrogator saw that her silence was equivalent to an admission of the fact. No. There must be something more than this extraordinary power of Protestant vision, before we shall abandon our faith in the efficacy of what- the elder Mr. Weller affectionately denominated the " Have- his-carcase." Meanwhile Mr. Newdegate has his triumph. He has shown his respect for the Ecolliastical Titles Bill by addressing Dr. Ullathorne as " Reverend Sir." Yet the Church of England admits the validity of Roman orders. Surely it should have been Right Reverend Sir.