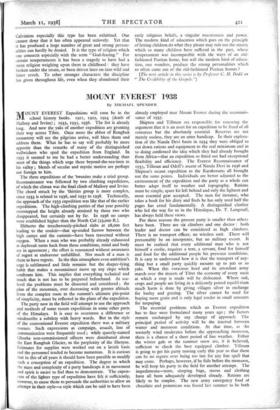 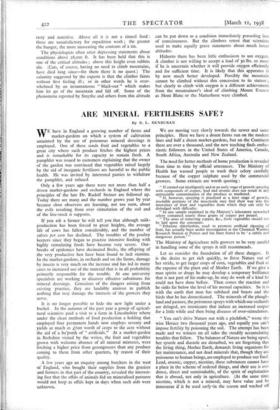 MOUNT EVEREST Expeditions will soon be in the school history books. 1921, 1922, 1924 (death of Mallory and Irvine) ; 1933, 1935, 1936. The list is already long. And now the yaks of another expedition are grunting their way across Tibet. Once more the abbot of Rongbuk monastery will see the pilgrims arrive, will bless them and address them. What he has to say will probably be more apposite than the remarks of many of the distinguished wellwishers who sped the expedition from England. In 1935 it seemed to me he had a better understanding than most of the things which urge these beyond-the-sea=men to his valley ; blends of secular and mystic motive are perhaps not foreign to him.

The three expeditions of the 'twenties make a triad group. Reconnaissance was followed by two climbing expeditions, of which the climax was the final climb of Mallory and Irvine. The chord struck by the 'thirties group is more complex, since 1933 is related to 1936, and 1935 to 1938. Technically, the approach of the 1933 expedition was like that of the earlier expeditions. The high-climbing parties of that year possibly overstepped the height already attained by those two who disappatred, but certainly not by far. In 1936 no camps were established higher than the North Col (23,000 ft.).

Hitherto the treacherously-pitched slabs at 28,000 feet leading to the couloir—that up-ended furrow between the high camps and the surnmit—have been traversed without oxygen. When a man who was probably already exhausted at daybreak turns back from those conditions, mind and body are in agreement ; the effort is renounced without awareness of regret at endeavour unfulfilled. Not much of a man is there to have regrets. In the thin atmosphere even ambition's, urge is sublimated and little remains but the deeper-lying habit that makes a mountaineer move up any slope which confronts him. This implies that everything technical and much that is not has to be prepared beforehand. At sea- level the problems must be dissected and considered ; the plan of the mountain, ever decreasing with greater altitude from the , complex roots to the summit's ultimate pin-point of simplicity, must be reflected in the plans of the expedition.

The party now in the field will attempt to use the approach and methods of some recent expeditions in some other parts of the Himalaya. It is easy to overstress a difference or misdescribe a subtlety with heavy words. But in the style of the conventional Everest expedition there was a military msence. Such expressions as campaign, assault, line of communication were frequently used ; while queerly-named Ghurka non-commissioned officers were distributed about the East Rongbuk Glacier, to the perplexity of the Sherpas. Estimates for supplies were worked out on a lavish basis and the personnel tended to become numerous. It is curious that in this of all years it should have been possible to modify such a conception of an expedition. The degree to which the mass and complexity of a party handicaps it in movement and spirit is easier to feel than to demonstrate. The expon- ents of the lighter type of expedition have felt it sufficiently, however, to cause them to persuade the authorities to allow an attempt in their style—a style *hich can be said to have been already employed near Mount Everest during the reconnais- sance of 1935.

Shipton and Tillman are responsible for renewing the argument that it is an asset for an expedition to be freed of all resources but the absolutely essential. Reserves are not merely useless, they are an utter handicap. In their explora- tion of the Nanda Devi basin in 1934 they were obliged to cut down rations and equipment to the real minimum and in so doing confirmed the idea which they had already brought from Africa—that an expedition so fitted out had exceptional flexibility and efficiency. The Everest Reconnaissance of 1935, Tillman and Odell's ascent of Nanda Devi in 1936 and Shipton's recent expedition to the Karakorams all brought out the same points. Individuals are better adjusted to the environment of the expedition and the party as a whole can better adapt itself to weather and topography. Rations mist be simple, spare kit left behind and only the lightest and most essential gear accepted. The man for instance, who takes a book for his diary and finds he has only used half the pages has erred fundamentally. A distinguished climber who led the way for us in the Himalayas, Dr. T. Longstaff, has always held these views.

For these reasons the present party is smaller than others have been. There are six climbers and one doctor : both leader and doctor can be considered as high climbers. There is no transport officer, no wireless unit. There will presumably be an interpreter, but no military escort. It must be realised that every additional man who is not himself a coolie, requires a tent, a servant, food for himself and food for the additional people his presence conditions. It is easy to understand how it is that the transport of any- thing but a small party quickly mounts up to 300 or so yaks. When this voracious herd and its attendant army march over the deserts of Tibet the economy of every oasis at which a stop is made will be dislocated. Where soil, crops and people are living in a delicately poised equilibrium much harm is done by giving villages silver in exchange for barley and grazing. The silver cannot be used for buying more grain and is only legal tender in small amounts for taxpaying.

The essential problems which an Everest expedition has to face were formulated many years ago ; the factors remain unchanged by any change of approach. The principal period of activity will be the interval between winter and monsoon conditions. At that time, as the westerly wind moderates before the approaching monsoon, there is a chance of a short period of fine weather. Either the winter gale or the summer snow are, it is believed, sufficient to check the best equipped climber. Tillman is going to get his party moving early this year so that there can be no regrets over being too late for any fine spell that may come. Perhaps, however, if he fails before the monsoon, he will keep his party in the field for another attempt. The impedimenta—tents, sleeping bags, stoves and clothing have all been adequately developed already. Rations are likely to be simpler. The new army emergency food of chocolate and pemmican was found last summer to be both tasty and nutritive. Above all it is not a tinned food : these are unsatisfactory for expedition work ; the greater the hunger, the more nauseating the contents of a tin.

The physiologists often utter depressing statements about conditions above 28,000 ft. It has been held that this is one of the critical altitudes ; above this height even rabbits die. (Cats, of course, having no need to climb mountains, have died long since—for them there is no quest.) The calamity suggested by the experts is that the climber faints without first feeling ill ; or in other words he is over- whelmed by an instantaneous " black-out " which makes him let go of the mountain and fall off. Some of the phenomena reported by Smythe and others from this altitude can be put down to a condition immediately preceding loss of consciousness. But the climbers retort that scientists used to make equally grave statements about. much lower altitudes.

Hitherto there has been little enthusiasm to use oxygen. A climber is not willing to accept a load of 3o lbs. or more if he is uncertain whether it will provide oxygen efficiently and for sufficient time. It is likely that this apparatus is by now much better developed. Possibly the mountain cannot be climbed without this concession to its stature ; but clearly to climb with oxygen is a different achievement from the mountaineer's ideal of climbing Mount Everest as Mont Blanc or the Matterhorn were climbed.