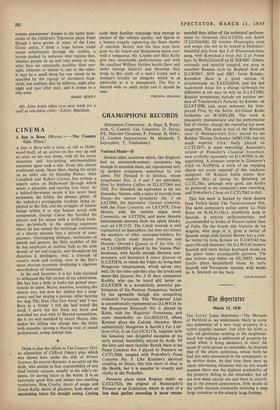 A Star is Born tells a story, as old as Holly- wood itself, of an actress on her way up and an actor on his way down, with all the corny situations and tear-jerking sentimentalities attendant upon such a tale. From this almost traditional mush, Moss Hart, basing his script on an older one by Dorothy Parker, Alan Campbell and Robert Carson, has written a superb satire on Hollywood through which winds a plausible and moving love story. As a behind-the-scenes movie it has never been surpassed, the falsity, the phoney glitter, of the industry's propaganda machine being ex- ploited to the full, and the struggles of human beings within it to stay human noted with compassion. George Cukor has handled his players and his scenes with a brilliant fresh- ness, particularly in the opening sequences where he has turned the backstage confusions of a charity matinee into a miracle of com- pactness. Overlapping dialogue, hesitancies of speech and gesture, the little muddles of life he has employed as realistic foils to the twin thrusts of wit and tragedy, and throughout his direction is intelligent, vital, a triumph of camera work and cutting, even in the film's more obvious moments displaying a vigorous unorthodoxy of treatment.

In the end, however, it is for Judy Garland to withstand the full torrent of my admiration. She has lost-a little in looks but gained enor- mously in talent. Warm, sensitive, touching she always was, but now her pathos has a poig- nancy and her singing a passion. After hearing her sing 'The Man That Got Away' and 'I was Born in a Trunk' I felt she had seized the torch I carry for her from my hand and scorched my soul with it! Beyond competition, she is yet well matched by James Mason, who makes his falling star plunge into the drink with panache, leaving a blazing trail of sound professional acting behind him.

Drink is also the villain in The Country Girl. an adaptation of Clifford Odets's play which was shown here under the title of Winter Journey. Its central character is an actor on the skids, who unable to face responsibility of any kind invents excuses, usually at his wife's ex- pense, for having taken to the bottle. It is an extremely good film and makes two startling revelations. Bing Crosby, shorn of songs, and Grace Kelly, shorn of glamour, both show an astonishing talent for straight acting. Casting

aside their familiar trappings they emerge as players of the subtlest quality, sad figures in a human tragedy registering the finest shades of emotion. Beauty and the bass note have gone by the board and Melpomene taken over with a vengeance. Mr. Crosby and Miss Kelly give two remarkable performances and with the excellent William Holden beside them and under George Seaton's taut direction they bring to this study of a man's frailty and a woman's loyalty an integrity which is as admirable as it is unexpected. The film is blessed with an adult script and it should be seen.