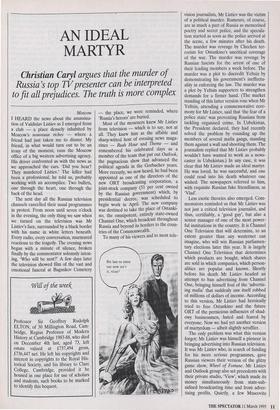 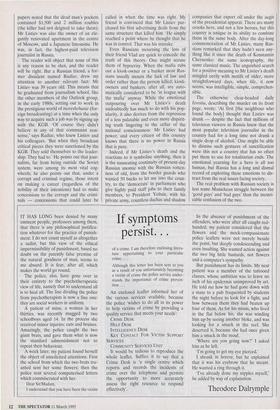 Christian Caryl argues that the murder of

Russia's top TV presenter can be interpreted to fit all prejudices. The truth is more complex

Moscow I HEARD the news about the assassina- tion of Valdislav Listiev as I emerged from a club — a place densely inhabited by Moscow's nouveaux riches — where a friend had just taken me to dinner. My friend, in what would turn out to be an irony of the moment, runs the Moscow office of a big western advertising agency. His driver confronted us with the news as we approached the cars. 'Did you hear? They murdered Listiev.' The killer had been a professional, he told us, probably working with an accomplice. Two bullets, one through the heart, one through the back of the head.

The next day all the Russian television channels cancelled their usual programmes in protest. From noon until seven o'clock in the evening, the only thing we saw when we turned on the television was Mr Listiev's face, surrounded by a black border with his name in white letters beneath. Every radio, every conversation, murmured reactions to the tragedy. The evening news began with a minute of silence, broken finally by the commentator solemnly inton- ing, 'Who will be next?' A few days later the television showed film of the vast and emotional funeral at Bagankov Cemetery — the place, we were reminded, where `Russia's heroes' are buried.

Most of the mourners knew Mr Listiev from television — which is to say, not at all. They knew him as the affable and sharp-witted host of evening news maga- zines — Rush Hour and Theme — and remembered his celebrated days as a member of the team that put out Outlook, the pugnacious show that advanced the political agenda in the Gorbachev years. More recently, we now heard, he had been appointed as one of the directors of the new ORT broadcasting corporation, a joint-stock company (51 per cent owned by the Russian government) which, by presidential decree, was scheduled to begin work in April. The new company was destined to take the place of Ostanki- no, the omnipotent, entirely state-owned Channel One, which broadcast throughout Russia and beyond its borders to the coun- tries of the Commonwealth.

To many of his viewers and to most tele- vision journalists, Mr Listiev was the victim of a political murder. Rumours, of course, are as much a part of Russia as memorised poetry and secret police, and the specula- tion started as soon as the police arrived at the scene, a few minutes after his death. The murder was revenge by Chechen ter- rorists for Ostankino's uncritical coverage of the war. The murder was revenge by Russian fascists for the arrest of one of their leading members a week before. The murder was a plot to discredit Yeltsin by demonstrating his government's ineffectu- ality in enforcing the law. The murder was a plot by Yeltsin supporters to strengthen demands for a firmer hand. (The market standing of this latter version rose when Mr Yeltsin, attending a commemorative cere- mony for Mr Listiev, said that `the fear of a police state' was preventing Russians from tackling organised crime. In Uzbekistan, the President declared, they had recently solved the problem by rounding up the members of several mafia gangs, standing them against a wall and shooting them. The journalists replied that Mr Listiev probably wouldn't have wanted to work as a news- caster in Uzbekistan.) In any case, it was clear that Mr Listiev made an ideal martyr. He was loved, he was successful, and one could read into his death whatever one wished. The newspapers referred to him, with requisite Russian fake friendliness, as `Vlad'.

Less exotic theories also emerged. Com- mentators reminded us that Mr Listiev was not just a critical television journalist, and thus, certifiably, a 'good guy', but also a senior manager of one of the most power- ful institutions in the country. It is Channel One Television that will determine, to an extent greater than any westerner can imagine, who will win Russian parliamen- tary elections later this year. It is largely Channel One Television that determines which products are bought, which shares are sold in which companies, which person- alities are popular and known. Shortly before his death Mr Listiev headed an attempt to ban advertising from Channel One, bringing himself foul of the 'advertis- ing mafia' that suddenly saw itself robbed of millions of dollars of income. According to this version, Mr Listiev had heroically tried to free Ostankino and the future ORT of the pernicious influences of shad- owy businessmen, hated and feared by everyone. Now we had yet another version of martyrdom — albeit slightly scruffier.

The only problem was what this version forgot: Mr Listiev was himself a pioneer in bringing advertising into Russian television. It was Mr Listiev who, in search of funding for his more serious programmes, gave Russian viewers their version of the glitzy game show, Wheel of Fortune. Mr Listiev and Outlook group also set precedents with their private studio, 'View', which made its money simultaneously from state-sub- sidised broadcasting time and from adver- tising profits. Quietly, a few Muscovite

papers noted that the dead man's pockets contained $1,500 and 2 million roubles (the killer had not deigned to take them). Mr Listiev was also the owner of an ele- gantly renovated apartment in the centre of Moscow, and a Japanese limousine. He was, in fact, the highest-paid television journalist in Russia.

The reader will object that none of this is any reason to be shot, and the reader will be right. But a Russian friend, a for- mer dissident named Radiar, drew my attention to another relevant fact: Mr Listiev was 39 years old. This means that he graduated from journalism school, like the other members of the Outlook group, in the early 1980s, setting out to work in the prestigious world of inoveshchanie (for- eign broadcasting) at a time when the only way to acquire such a job was by signing up with the KGB. 'Of course they didn't believe in any of that communist non- sense,' says Radiar, who knew Listiev and his colleagues. 'But when they broadcast critical pieces they were sanctioned by the KGB. They sold themselves to the leader- ship. They had to.' He points out that jour- nalists, far from being outside the Soviet system, were among its most vital cog- wheels; he also points out that, under a corrupt and criminal regime, those intent on making a career (regardless of the nobility of their intentions) had to make concessions to the corrupt and the crimi- nals — concessions that could later be

called in when the time was right. My friend is convinced that Mr Listiev pur- chased his first advertising deals from the same structure that killed him. 'He simply reached a point where he thought that he was in control. That was his mistake.'

Even Russians mourning the loss of their friend Vlad are quick to concede the truth of this theory. One might accuse them of hypocrisy. When the mafia rubs out a kiosk-owner or a banker most Rus- sians usually mourn the lack of law and order rather than the person killed; kiosk- owners and bankers, after all, are auto- matically considered to be 'in league with the mafia' anyway. While the emotional outpouring over Mr Listiev's death undoubtedly has much to do with his pop- ularity, it also derives from the repression of a less palatable and even more dispirit- ing truth lingering in the cellar of the national consciousness: Mr Listiev had power, and every citizen of this country knows that there is no power in Russia that is pure.

Indeed, if Mr Listiev's death and the reactions to it symbolise anything, then it is the nauseating continuity of present-day Russian anomie with the Russian rotten- ness of old, from the border guards who wanted 50 bucks to let me into the coun- try, to the 'democrats' in parliament who give highly paid staff jobs to their family members, to President Yeltsin, with his private army, countless dachas and shadow companies that export oil under the aegis of the presidential apparat. There are many crooks here, and not a few heroes, but this country is unique in its ability to combine them in the same body. After the day-long commemoration of Mr Listiev, many Rus- sians remarked that they hadn't seen any- thing like it since the death of Konstantin Chernenko: the same iconography, the same classical music. The anguished search for a positive meaning to Mr Listiev's death mingled eerily with motifs of older, more straightforward days, when life, it now seems, was intelligible, simple, comprehen- sible.

The otherwise clear-headed daily Izvestia, describing the murder on its front page, wrote: 'At first [the neighbour who found the body] thought that Listiev was drunk — despite the fact that millions of television viewers in Russia knew that the most popular television journalist in the country had for a long time not drunk a single drop of alcohol.' One might be able to dismiss such gestures of sanctification were this not a country that has so often put them to use for totalitarian ends. The emotional yearning for a hero is all too human, but Russia has a long and dismal record of exploiting these emotions to dis- tract from the real issues facing society.

The real problem with Russian society is less some Manichean struggle between the `good guys' and tad guys' than the inextri- cable confusion of the two.