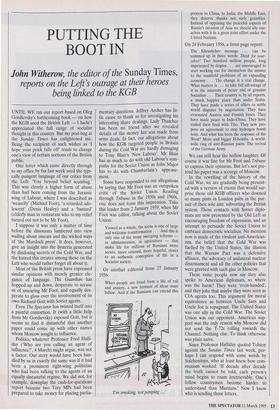 PUTTING THE BOOT IN

John Witherow, the editor of the Sunday Times,

UNTIL WE ran our report based on Oleg Gordievsky's forthcoming book — on how the KGB used the British Left — I hadn't appreciated the full range of socialist thought in this country. But my post-bag at the Sunday Times has enlightened me. Being the recipient of such wishes as 'I hope your prick falls off' tends to change one's view of certain sections of the British public.

One letter which came directly through to my office by fax last week used the typi- cally pungent language of our critics from the Left: 'You beyond belief scumbag.' This was clearly a higher form of abuse than had been coming from the Jurassic wing of Labour, where I was described as `weaselly' (Michael Foot), 'a retarded ado- lescent' (Denis Healey) and a 'bastard' (elderly man in restaurant who to my relief turned out not to be Mr Foot).

I suppose it was only a matter of time before the dinosaurs lumbered into view wailing about smears and the wicked ways of 'the Murdoch press'. It does, however, give an insight into the hysteria generated by disclosing secrets of the Cold War, and the hatred this creates among those on the Left who would rather forget all about it.

Most of the British press have expressed similar opinions with merely greater ele- gance of language. The Guardian has hopped up and down, desperate to accuse us of smearing Mr Foot, and equally des- perate to gloss over the involvement of its own Richard Gott with Soviet agents.

Even The Spectator has twisted itself into a painful contortion. It (with a little help from Mr Gordievsky) exposed Gott, but it seems to find it distasteful that another paper could come up with other names whom Moscow sought to influence. Politics, whatever Professor Fred Halli- day ('Who are you calling an agent of influence?', 4 March) might argue, was not a factor. Our story would have been han- dled by us in exactly the same way if it had been a prominent right-wing politician who had been talking to the agents of an equally distasteful regime. We did not, for example, downplay the cash-for-questions report because two Tory MPs had been prepared to take money for placing parlia- mentary questions. Jeffrey Archer has lit- tle cause to thank us for investigating his interesting share dealings. Lady Thatcher has been no friend after we revealed details of the money her son made from arms deals. In fact, our allegations about how the KGB targeted people in Britain during the Cold War are hardly damaging to Tony Blair's 'New Labour'. Mr Blair has as much to do with old Labour's sym- pathy for the Soviet Union as John Major has to do with Chamberlain's appease- ment.

Some have responded to our allegations by saying that Mr Foot was an outspoken critic of the Soviet Union. Reading through Tribune in the 1950s and 1960s, one does not form this impression. Take this leader from 2 January 1959, when Mr Foot was editor, talking about the Soviet Union:

Viewed as a whole, the scene is one of large and welcome transformation ... And this is only one of the many sweeping reforms in administration, in agriculture — that make life for millions of Russians more secure, more rational, more hopeful, closer to an authentic conception of life in a Socialist society.

When people are freed from a life of toil and anxiety, a new ferment of ideas must follow. And if the Russians can extend this

process to China, to India, the Middle East, they deserve thanks not surly grumbles. Instead of opposing the peaceful aspects of Russia's invasion of Asia we should ally our- selves with it in a great joint effort under the United Nations.

On 24 February 1956, a front-page report: The Khrushchev message ... can be summed up in three words: Think for your- selves! Two hundred million people, long imprisoned by dogma ... are encouraged to start working out for themselves the answer to the manifold problems of an expanding economy . . . The change is a real change. What matters is ... to take full advantage of it in the interests of peace and of genuine Socialism ... Their country is, by all reports, a much happier place than under Stalin. They have made a series of offers to settle world disputes by negotiation. They have evacuated Austria and Finnish bases. They have made peace in Indo-China. They have ended their feud with Tito. They now pro- pose an agreement to stop hydrogen bomb tests. And what has been the response of the West? More and bigger H-bombs. A world- wide ring of anti-Russian pacts. The revival of the German Army.

We can still hear the hollow laughter. Of course it was fine for Mr Foot and Tribune to express their opinions. But let's not pre- tend his paper was a scourge of Moscow.

In the rewriting of the history of the Cold War, we are gradually being present- ed with a version of events that would sur- prise those old KGB officers who downed so many pints in London pubs in the pur- suit of their sole aim: subverting the British system. Those contacts with Soviet diplo- mats are now presented by the Old Left as encouraging freedom of expression, and an attempt to persuade the Soviet Union to embrace democratic socialism. No mention now is made of the virulent anti-American- ism, the belief that the Cold War was fuelled by the United States, the illusion that the Warsaw Pact was a defensive alliance, the advocacy of unilateral nuclear disarmament and all the other policies that were greeted with such glee in Moscow.

These same people now say they also spoke to American diplomats, so where was the harm? They were 'even-handed', and they joke that maybe they were seen as CIA agents too. This argument for moral equivalence as between Uncle Sam and Uncle Joe is repugnant. The United States was our ally in the Cold War. The Soviet Union was our opponent. American sup- port was the only reason why Moscow did not send the T-72s rolling towards the Channel. Nothing else. To think otherwise was plain naive.

Since Professor Halliday quoted Tolstoy against the Sunday Times last week, per- haps I can respond with some words by Solzhenitsyn, who at least knew how com- munism worked: 'If decade after decade the truth cannot be told, each person's mind begins to roam irretrievably. One's fellow countrymen become harder to understand than Martians.' Now I know who is sending those letters.