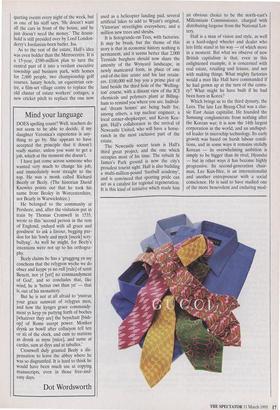 DOES spelling count? Well, teachers do not seem to be able to decide, if my daughter Veronica's experience is any- thing to go by. She appears to have accepted the principle that it doesn't really matter, unless you want to get a job, which at the moment she doesn't.

I have just come across someone who wanted very much to change his job, and immediately went straight to the top. He was a monk called Richard Beerly or Beely. (The historian David Knowles points out that he took his name from Beoley in Worcestershire, not Bearly in Warwickshire.) He belonged to the community at Pershore, and, after the visitation put in train by Thomas Cromwell in 1535, wrote to this 'second person in the rem of Englond, ynduyd with all grace and goodness' to ask a favour, begging par- don for his 'lowly and myck [meek] scry- bullyng'. As well he might, for Beely's intentions were not up to his orthogra- phy.

Beely claims he has a `gruggyng yn my conchons that the relygyon wyche we do obser and keype ys no rull [rule] of sentt Benett, nor yt [yet] no commandyment of God', and so concludes that, like wind, he is `bettur owt than yn' — that is, out of his monastery.

Cromwell duly granted Beely a dis- pensation to leave the abbey where he was so disgruntled. It is hard to think he would have been much use at copying manuscripts, even in those free-and- easy days.