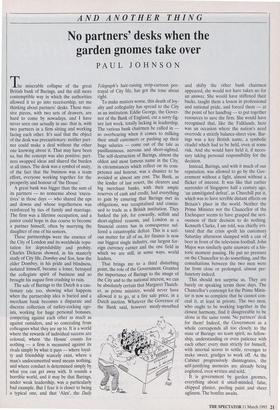 No partners' desks when the garden gnomes take over

the miserable collapse of the great British bank of Barings, and the still more contemptible way in which the authorities allowed it to go into receivership, set me thinking about partners' desks. These mas- sive pieces, with two sets of drawers, are hard to come by nowadays, and I have never seen one actually in use: that is, with two partners in a firm sitting and working facing each other. It's said that the object of the desk was precautionary: neither part- ner could make a deal without the other one knowing about it. That may have been so, but the concept was also positive: part- ners swapped ideas and shared the burden at all times. The desk was a symbol of unity, of the fact that the business was a team effort, everyone working together for the prosperity and honour of 'the House'.

A great bank was bigger than the sum of its partners — no nonsense about 'execu- tives' in those days — who shared the ups and downs and whose togetherness was reinforced by ties of family and marriage. The firm was a lifetime occupation, and a junior could hope in due course to become a partner himself, often by marrying the daughter of one of his seniors.

These partnerships were the essence of the City of London and its worldwide repu- tation for dependability and probity. Charles Dickens showed, in his masterly study of City life, Dombey and Son, how the elder Dombey, in his pride and blindness, isolated himself, became a loner, betrayed the collegiate spirit of business and so brought his august firm crashing to ruin.

The sale of Barings to the Dutch is a cau- tionary tale too, showing what happens when the partnership idea is buried and a merchant bank becomes a disparate and discrete collection of turkey-cocking ego- ists, working for huge personal bonuses, competing against each other as much as against outsiders, and so concealing from colleagues what they are up to. It is a world where the rewards of individual success are colossal, where 'the House' counts for nothing — a firm is measured against its rivals simply by what it pays — where loyal- ty and friendship scarcely exist, where a man's undocumented word means nothing, and where conduct is determined simply by what you can get away with. It sounds a horrible world, and it may be that Barings, under weak leadership, was a particularly bad example. But I fear it is closer to being a typical one, and that 'Alex', the Daily Telegraph's hair-raising strip-cartoon por- trayal of City life, has got the tone about right.

To make matters worse, this death of loy- alty and collegiality has spread to the City as an institution. Eddie George, the Gover- nor of the Bank of England, cut a sorry fig- ure last week, totally lacking in leadership. The various bank chairmen he called in so overbearing when it comes to milking their small customers or pushing up their huge salaries — come out of the tale as pusillanimous, nervous and short-sighted. The self-destruction of Barings, almost the oldest and most famous name in the City, in circumstances which reflect on its com- petence and honour, was a disaster to be avoided at almost any cost. The Bank, as the lender of last resort, the clearers and big merchant banks, with their ample reserves of cash and credit, had everything to gain by ensuring that Barings met its obligations, was recapitalised and contin- ued to trade as a British institution. They funked the job, for cowardly, selfish and short-sighted reasons, and London as a financial centre has in consequence suf- fered a catastrophic defeat. This is a seri- ous matter for all of us, for finance is now our biggest single industry, our largest for- eign currency earner and the one field in which we are still, in some ways, world leaders.

That brings me to a third disturbing point, the role of the Government. Granted the importance of Barings to the image of the City and to the national interest, we can he absolutely certain that Margaret Thatch- er, as prime minister, would never have allowed it to go, at a fire sale price, in a Dutch auction. Whatever the Governor of the Bank said, however mealy-mouthed and shifty the other bank chairmen appeared, she would not have taken no for an answer. She would have stiffened their backs, taught them a lesson in professional and national pride, and forced them — at the point of her handbag — to put together resources to save the firm. She would have recognised that, like the Falklands, here was an occasion where the nation's need overrode a strictly balance-sheet view. Bar- ings was a key British name, a symbolic citadel which had to be held, even at some risk. And she would have held it, if neces- sary taking personal responsibility for the decision.

Instead, Barings, and with it much of our reputation, was allowed to go by the Gov- ernment without a fight, almost without a flicker of interest. It was like that earlier surrender of Singapore half a century ago, `an unmitigated defeat', as Churchill put it, which was to have terrible distant effects on Britain's place in the world. Neither the Prime Minister nor the Chancellor of the Exchequer seems to have grasped the seri- ousness of their decision to do nothing. Kenneth Clarke, I am told, was chiefly irri- tated that the crisis spoilt his customary Saturday afternoon slumped with a can of beer in front of the television football. John Major was similarly quite unaware of a his- toric moment passing. He put no pressure on the Chancellor to do something, and the consultations between the two men were far from close or prolonged, almost per- functory indeed.

This should not surprise us. They are barely on speaking terms these days. The Chancellor's contempt for the Prime Minis- ter is now so complete that he cannot con- ceal it, at least in private. The two men, who ought to be working together in the closest harmony, find it disagreeable to be alone in the same room. No partners' desk for them! Indeed, the Government as a whole corresponds all too closely to the state of Barings: no team spirit, no fellow- ship, understanding or even patience with each other: every man strictly for himself, with internal scores to settle, revenges to make sweet, grudges to work off. As the Cabinet progressively disintegrates, the self-justifying memoirs are already being cogitated, even written and sold.

It is government by garden gnomes, everything about it small-minded, false, chipped plaster, peeling paint ,and sheer ugliness. The bonfire awaits.