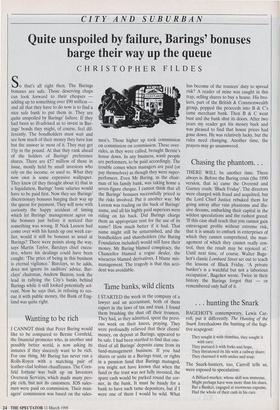 Quite unspoiled by failure, Barings' bonuses barge their way up the queue

o that's all right then. The Barings bonuses are safe. Those deserving chaps can look forward to their cheques adding up to something over £90 million and all that they have to do now is to find a nice safe bank to put them in. They are quite unspoiled by Barings' failure. If they had been so ill-advised as to invest in Bar- ings' bonds they might, of course, feel dif- ferently. The bondholders must wait and see how much of their money they have lost but the answer is: most of it. They may get 15p in the pound. At that they rank ahead of the holders of Barings' preference shares. There are £57 million of these in issue, mostly held by small investors who rely on the income, or used to. What they now own is some expensive wallpaper. They knew (if they thought about it) that in a liquidation, Barings' basic salaries would have to be paid first. Now they see Barings' discretionary bonuses barging their way up the queue for payment. They will note with curiosity the happy accident of timing which let Barings' management agree on the bonuses just before it noticed that something was wrong. If Nick Leeson had come over with his hands up one week ear- lier, would it still be bonuses as usual at Barings? There were points along the way, says Martin Taylor, Barclays chief execu- tive, where his dealings could have been caught: 'The price of being in this business is eternal vigilance.' Barclays, so he adds, does not ignore its auditors' advice. Bar- clays' chairman, Andrew Buxton, took the lead in rallying the City's banks behind Barings while it still looked potentially sol- vent. Now he says that, in refusing to res- cue it with public money, the Bank of Eng- land was quite right.

Wanting to be rich

I CANNOT think that Peter Baring would like to be compared to Bernie Cornfeld, the financial promoter who, in another and possibly better world, is now asking its inmates if they sincerely want to be rich. For one thing, Mr Baring has never run a Rolls-Royce with a matching pair of leather-clad lesbian chauffeuses. The Corn- feld fortune was built up on Investors Overseas Services, which made many peo- ple rich, but not its customers. IOS sales- men were paid on commission. Their man- agers' commission was based on the sales- men's. Those higher up took commission on commission on commission. These over- rides, as they were called, brought Bernie's house down. In any business, some people are performers, to be paid accordingly. The trouble comes when managers are paid (or pay themselves) as though they were super- perfomers. Even Mr Baring, as the chair- man of his family bank, was taking home a seven-figure cheque. I cannot think that all the Barings' bonuses successfully priced in the risks involved. Put it another way: Mr Leeson was trading on the back of Barings' name, and all his highly paid superiors were riding on his back. Did Barings charge them an appropriate rent for the use of its name? How much better if it had. That name might still be untarnished, and the bondholders and shareholders (the Baring Foundation included) would still have their money. Mr Baring blamed conspiracy, the Chancellor blamed a rogue dealer, the wiseacres blamed derivatives, I blame mis- management. The tragedy is that this acci- dent was avoidable.

I STARTED the week in the company of a lawyer and an accountant, both of them expert in the laws of tax and trust. I found them brushing the dust off their trousers. They had, as they admitted, spent the previ- ous week on their knees, praying. They were profoundly relieved that their clients' money, on deposit at Barings, appeared to be safe. I had been startled to find that one- third of all Barings' deposits came from its fund-management business. If you had shares or units in a Barings trust, or rights in a pension fund that Barings managed, you might not have known that when the fund or the trust was not fully invested, the spare cash would be parked round the cor- ner, in the bank. It must be handy for a bank to have such tame depositors, but if I were one of them I would be wild. What has become of the trustees' duty to spread risk? A reader of mine was caught in this trap, selling shares to buy a house. His bro- kers, part of the British & Commonwealth group, popped the proceeds into B & C's tame merchant bank. Then B & C went bust and the bank shut its doors. After two years my reader got his money back and was pleased to find that house prices had gone down. He was relatively lucky, but the rules need changing. Another time, the prayers may go unanswered.

THERE WILL be another time. There always is. Before the Baring crisis (the 1890 version, that is) came the Overend and Gurney crash: 'Black Friday'. The directors were charged with fraud and acquitted, but the Lord Chief Justice rebuked them for going astray after vain phantoms and illu- sive dreams, embarking their capital in the wildest speculations and the rashest greed: 'If this case shall teach that you cannot gain extravagant profits without extreme risk, that it is unsafe to embark in enterprises of which they cannot comprehend, the man- agement of which they cannot really con- trol, then the result may be rejoiced at.' Until next time, of course. Walter Bage- hot's classic Lombard Street set out to teach the lessons of Black Friday. 'A private banker's is a watchful but not a laborious occupation', Bagehot wrote. Twice in their history the Barings forgot that — or remembered only half of it.

BAGEHOT'S contemporary, Lewis Car- roll, put it differently. The Hunting of the Snark foreshadows the hunting of the fugi- tive scapegoat:

The Snark-hunters, too, Carroll tells us, were exposed to speculation:

A Billiard-marker, whose skill was immense, Might perhaps have won more than his share, But a Banker, engaged at enormous expense, Had the whole of their cash in his care.