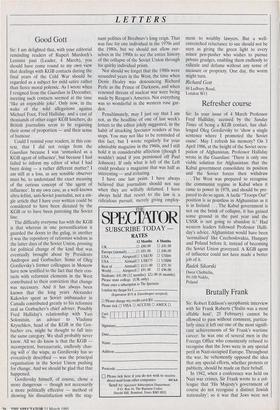 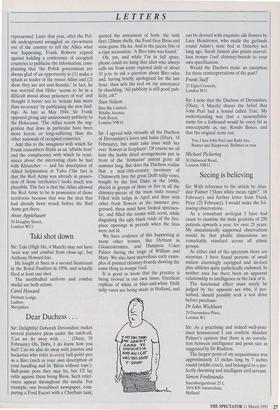 Sir: Robert Eddison's sycophantic interview with Sir Frank Roberts (`Stalin was a most affable host', 25 February) cannot be allowed to pass without comment, particu- larly since it left out one of the most signifi- cant achievements of Sir Frank's wartime career: he was one of several men in the Foreign Office who consistently refused to recognise that the Jews were in any special peril in Nazi-occupied Europe. Throughout the war, he vehemently opposed the idea that any special efforts, whether protests or publicity, should be made on their behalf.

In 1942, when a conference was held on Nazi war crimes, Sir Frank wrote to a col- league that 'His Majesty's government of course do not recognise a distinct Jewish nationality'; so it was that Jews were not represented. Later that year, after the Pol- ish underground smuggled an eye-witness out of the country to tell the Allies what was happening, Frank Roberts argued against holding a conference of occupied countries to publicise the information, com- plaining that 'the Polish government are always glad of an opportunity to (1) make a splash as leader of the minor Allies and (2) show they are not anti-Semitic.' In fact, he was worried that Hitler 'seems to be in a difficult mood about prisoners of war' and thought it better not to 'irritate him more than necessary' by publicising the new find- ings. As late as May 1944, Sir Frank opposed giving any unnecessary publicity to the Holocaust: 'The Allies resent the sug- gestion that Jews in particular have been more heroic or long-suffering than the other nationals of occupied countries.'

Add this to the smugness with which Sir Frank remembers Stalin as an 'affable host' and the complacency with which he remi- nisces about the interesting chats he had with Khruschev — and his description of Allied helplessness at Yalta (`the fact is that the Red Army was already in posses- sion of those territories') looks much less plausible. The fact is that the Allies allowed the Red Army to be in possession of those territories because that was the deal that had already been struck before the Red Army got there.