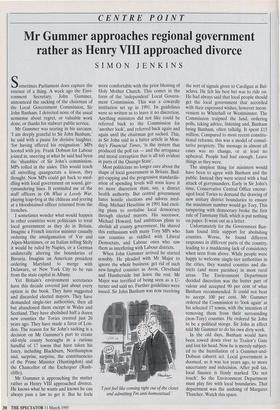 Sometimes Parliament does capture the essence of a thing. A week ago the Envi- ronment Secretary, John Gummer, announced the sacking of the chairman of the Local Government Commission, Sir John Banham. I detected none of the usual nonsense about regret, or valuable work done, or thanks for stalwart public service.

Mr Gummer was searing in his sarcasm. `I am deeply grateful to Sir John Banham,' he said with a pause for derisive laughter, `for having offered his resignation.' MPs hooted with joy. Frank Dobson for Labour joined in, sneering at what he said had been the 'shambles' of Sir John's commission. MPs rolled in the aisles. This would teach all snivelling quangocrats a lesson, they thought. Now MPs could get back to med- dling with local government on sound, ger- rymandering lines. It reminded me of the staff officers in Oh What a Lovely War, playing leap-frog at the chateau and jeering at a bloodstained officer returned from the trenches.

I sometimes wonder what would happen in other countries were politicians to treat local government as they do in Britain. Imagine a French interior minister casually ordering the amalgamation of Var and Alpes-Maritimes, or an Italian telling Sicily it would be ruled by Naples, or a German unilaterally altering the boundaries of Bavaria. Imagine an American president ordering Maryland to merge with Delaware, or New York City to be run from the state capital in Albany.

Yet Britain's environment secretaries have this decade covered just about every option in the book. They have suggested and discarded elected mayors. They have demanded single-tier authorities, then all but abandoned them except in Wales and Scotland. They have abolished half a dozen new counties the Tories created just 20 years ago. They have made a farce of Lon- don. The reason for Sir John's sacking is a decision on Mr Gummer's part to create old-style county boroughs in a curious handful of 17 towns that have taken his fancy, including Blackburn, Northampton and, surprise, surprise, the constituencies of the Prime Minister (Huntingdon) and the Chancellor of the Exchequer (Rush- cliffe).

Mr Gummer is approaching the matter rather as Henry VIII approached divorce. He knows what he wants and knows he can always pass a law to get it. But he feels more comfortable with the prior blessing of Holy Mother Church. This comes in the form of the 'independent' Local Govern- ment Commission. This was a cowardly institution set up in 1991. Its guidelines were so written as to leave it no discretion. Anything ministers did not like could be referred back to the Commission for `another look', and referred back again and again until the chairman got sacked. This, as Sir John said in a bitter article in Mon- day's Financial Times, 'is the system that produced the poll tax — and the arrogance and moral corruption that is all too evident in parts of the Quango State'.

Most politicians no longer care about the shape of local government in Britain. Bud- get-capping and the progressive standardis- ation of spending levels will soon leave it no more discretion than, say, a district health authority. But central government hates hostile elections and adores med- dling. Michael Heseltine in 1991 had excit- ing plans to revitalise local democracy through elected mayors. His successor, Michael Howard, had ambitious plans to abolish all county government. He shared this enthusiasm with many Tory MPs who saw counties as riddled with Liberal Democrats, and Labour ones who saw them as interfering with Labour districts. When John Gummer arrived he started sensibly. He pleaded with Mr Major to ignore the whole business: get rid of such new-fangled counties as Avon, Cleveland and Humberside but leave the rest. Mr Major was terrified of being seen as a U- turner and said no. Further guidelines were issued. Sir John Banham was now receiving I just feel like coming right out of the closet and admitting lm anti-homosexual.' the sort of signals given to Cardigan at Bal- aclava. He felt his best bet was to ride on. He had always said that local people should get the local government that accorded with their expressed wishes, however incon- venient to Whitehall or Westminster. The Commission traipsed the land, ordering polls, taking advice, listening and, Banham being Banham, often talking. It spent £15 million. Compared to most recent constitu- tional reforms, this was a model of consul- tative propriety. The message in almost all cases was no change, or at least no upheaval. People had had enough. Leave things as they were.

The simplest thing for ministers would have been to agree with Banham and the public. Instead they were seized with a bad attack of gerrymanders. Early in Sir John's time, Conservative Central Office encour- aged local Tories to demand the drawing of new unitary district boundaries to ensure the maximum number would go Tory. This tampering with democracy broke the first rule of Tammany Hall, which is put nothing on paper. It went out as a letter.

Unfortunately for the Government Ban- ham found little support for abolishing counties. Worse, he found different responses in different parts of the country, leading to a maddening lack of consistency when seen from above. While people were happy to welcome single-tier authorities in the cities, they wanted counties and dis- tricts (and more parishes) in most rural areas. The Environment Department decided discretion was the better part of valour and accepted 90 per cent of what Banham recommended. It could not bear to accept 100 per cent. Mr Gummer ordered the Commission to 'look again' at his selected 17 towns, with the intention of removing them from their surrounding (non-Tory) counties. He ordered Sir John to be a political stooge. Sir John in effect told Mr Gummer to do his own dirty work.

In the old days, Banham would have been rowed down river to Traitor's Gate and lost his bead. Now he is merely subject- ed to the humiliation of a Gummer-and- Dobson cabaret act. Local government is doomed, as it was ten years ago, to more uncertainty and indecision. After poll tax, local finance is firmly marked 'Do not touch'. So the Environment Department must play fire with local boundaries. That department was the undoing of Margaret Thatcher. Watch this space.