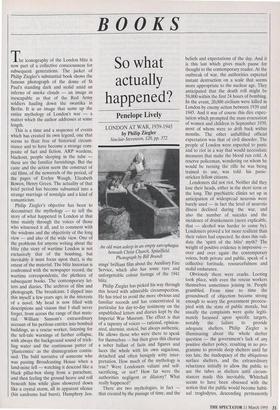 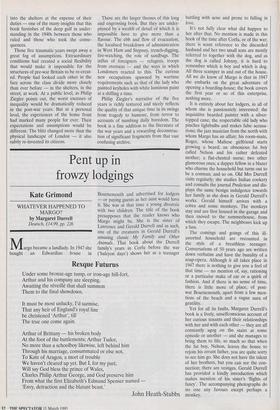 So what actually happened?

LONDON AT WAR, 1939-1945 • by Philip Ziegler Sinclair-Stevenson, £20, pp. 372 The iconography of the London blitz is now part of a collective consciousness for subsequent generations. The jacket of Philip Ziegler's substantial book shows the famous photograph of the dome of St Paul's standing dark and stolid amid an inferno of smoke clouds — an image as inescapable as that of the Red Army soldiers hauling down the swastika in Berlin. It is an image that sums up the entire mythology of London's war — a matter which the author addresses at some length.

This is a time and a sequence of events which has created its own legend, one that seems to float free of historical circum- stance and to have become a strange com- posite of fact and fiction. ARP wardens, blackout, people sleeping in the tube these are the familiar furnishings. But the caste and the action seem the construct of old films, of the newsreels of the period, of the pages of Evelyn Waugh, Elizabeth Bowen, Henry Green. The actuality of that brief period has become subsumed into a strange marriage of nostalgia and a kind of romanticism.

Philip Ziegler's objective has been to deconstruct the mythology — to tell the story of what happened in London at that time mainly through the voices of those who witnessed it all, and to comment with the wisdoms and the objectivity of the long view — and also of the wide view. One of the problems for anyone writing about the blitz (the story of wartime London is not exclusively that of the bombing, but inevitably it must focus upon that), is the extent of the material. The blitz historian is confronted with the newspaper record, the wartime correspondents, the plethora of subsequent books. The contemporary let- ters and diaries. The archives of film and photograph. The broadcasts. I dipped into this myself a few years ago, in the interests of a novel. My head is now filled with descriptions and visions that I shall never forget, from across the range of that mate- rial. William Sansom's extraordinary account of his perilous entries into bombed buildings, as a rescue worker, listening for the tell-tale warnings of further collapse, with always the background sound of trick- ling water and the continuous patter of `plastermice' as the disintegration contin- ued. The bald narrative of someone who was passing Broadcasting House when a land-mine fell — watching it descend like a black pillar-box slung from a parachute, and then feeling the ground heave and roll beneath him while glass showered down like a crystal storm, all in apparent silence (his eardrums had burst). Humphrey Jen- An old man asleep in an empty sarcophagus beneath Christ Church, Spitalfield. Photograph by Bill Brandt nings' brilliant film about the Auxiliary Fire Service, which also has some rare and unforgettable colour footage of the 1941 blitz.

Philip Ziegler has picked his way through this hoard with admirable circumspection. He has tried to avoid the more obvious and familiar records and has concentrated in particular for day-to-day testimony on the unpublished letters and diaries kept by the Imperial War Museum. The effect is that of a tapestry of voices — rational, opinion- ated, alarmist, stoical, but always authentic. He allows those who were there to speak for themselves — but then gives this chorus a sober ballast of facts and figures and laces the whole with his own sagacious, detached and often benignly witty inter- pretation. How much of the mythology is true? Were Londoners valiant and self- sacrificing, or not? How far were the authorities negligent or dilatory? What really happened?

There are two mythologies, in fact that created by the passage of time, and the beliefs and expectations of the day. And it is this last which gives much pause for thought to the contemporary reader. At the outbreak of war, the authorities expected instant destruction on a scale that seems more appropriate to the nuclear age. They anticipated that the death roll might be 58,000 within the first 24 hours of bombing. In the event, 20,000 civilians were killed in London by enemy action between 1939 and 1945. And it was of course this dire expec- tation which prompted the mass evacuation of women and children in September 1939, most of whom were to drift back within months. The other unfulfilled official expectation was that of civil disorder. The people of London were expected to panic and to riot in a way that would necessitate measures that make the blood run cold. A reserve policeman, wondering on whom he would be turning the rifle he was being trained to use, was told: his panic- stricken fellow citizens.

Londoners did_ not riot. Neither did they lose their heads, either in the short term or the long. The psychiatric clinics set up in anticipation of widespread neurosis were barely used — in fact the level of neurotic illness declined during the war, and also the number of suicides and the incidence of drunkenness (more explicable, that — alcohol was harder to come by). Londoners proved a lot more resilient than their rulers had expected. So does this vali- date the 'spirit of the blitz' myth? The weight of positive evidence is impressive over and over again the contemporary voices, both private and public, speak of a collective fortitude, resourcefulness and stolid endurance.

Obviously there were cracks. Looting took place, with even the rescue workers themselves sometimes joining in. People grumbled. From time to time the groundswell of objection became strong enough to worry the government preoccu- pied with the state of public morale, but usually the complaints were quite legiti- mately focussed upon specific targets, notably the failure to provide adequate shelters. Philip Ziegler is illuminating about the whole shelter question — the government's lack of any positive shelter policy, resulting in no pro- gramme to provide deep shelters until far too late, the inadequacy of the ubiquitous surface shelters, and the extraordinary reluctance initially to allow the public to use the tubes as shelters until circum- stances made this inevitable. Whitehall seems to have been obsessed with the notion that the public would become habit- ual troglodytes, descending permanently into the shelters at the expense of their duties — one of the many insights that this book furnishes of the deep gulf in under- standing in the 1940s between those who ruled and those who took the conse- quences.

Those five traumatic years swept away a great fog of assumptions. Extraordinary conditions had created a social flexibility that would make it impossible for the structures of pre-war Britain to be re-creat- ed. People had looked each other in the face across the class divide more closely than ever before — in the shelters, in the street, at work. At a public level, as Philip Ziegler points out, the worst excesses of inequality would be dramatically reduced in the post-war years. But at a personal level, the experiences of the home front had marked many people for ever. Their expectations and assumptions would be different. The blitz changed more than the physical landscape of London — it also subtly re-invented its citizens. These are the larger themes of this long and engrossing book. But they are under- pinned by a wealth of detail of which it is impossible here to give more than a flavour. The ebb and flow of evacuation, the localised breakdown of administration in West Ham and Stepney, trench-digging, fire-watching, the role of sandbags. The influx of foreigners — refugees, troops from overseas — and the ways in which Londoners reacted to this. The curious new occupations spawned by wartime requirements such as that of the lady who painted keyholes with white luminous paint at a shilling a time.

Philip Ziegler's narrative of the five years is richly textured and nicely reflects the quality of that unique time in its swings from tragedy to humour, from terror to accounts of numbing daily boredom. The book is a fine addition to the literature of the war years and a rewarding deconstruc- tion of significant fragments from that vast confusing archive.