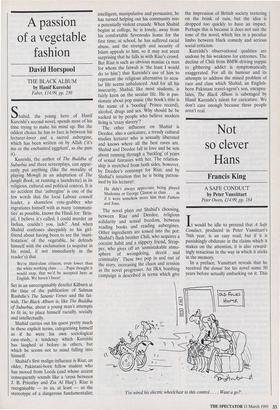 A passion of a vegetable fashion

hahid, the young hero of Hanif Kureishi's second novel, spends most of his time trying to make his mind up. But the oddest choice he has to face is between his lecturer-lover and a sacred aubergine, which has been written on by Allah (It's me or the enchanted eggplant', as she puts it).

Kureishi, the author of The Buddha of Suburbia and three screenplays, can appar- ently put anything (like the morality of playing Mowgli in an adaptation of The Jungle Book, or running a laundrette) in its religious, cultural and political context. It is no accident that 'aubergine' is one of the few words that the local Labour council leader, a shameless vote-grabber who ingratiates himself with as many 'communi- ties' as possible, knows the Hindi for: 'Brin- jal, I believe it's called. I could murder an Indian, couldn't you, lads?' And when Shahid confesses sheepishly to his girl- friend about having been to see the 'mani- festation' of the vegetable, he defends himself with the exclamation (a sequitur in his mind, if not immediately in the reader's) that

We're third-class citizens, even lower than the white working class . . . . Papa thought it would stop, that we'd be accepted here as English. We haven't been!

Set in an unrecognisably derelict Kilburn at the time of the publication of Salman Rushdie's The Satanic Verses and the fat- wah, The Black Album is, like The Buddha of Suburbia, about a young man's attempts to fit in, to place himself racially, socially and intellectually.

Shahid carries out his quest pretty much in these explicit terms, categorising himself as if he were his own sociological case-study, a tendency which Kureishi has laughed at before in others, but which he seems not to mind falling into himself.

Shahid's first malign influence is Riaz, an older, Pakistani-born fellow student who has moved from Leeds (and whose accent consequently sounds like a 'cross between J. B. Priestley and Zia Al Haq'). Riaz is recognisable — to us, at least — as the stereotype of a dangerous fundamentalist; intelligent, manipulative and persuasive, he has turned helping out his community into a potentially violent crusade. When Shahid begins at college, he is lonely, away from his comfortable Sevenoaks home for the first time; at school, he has suffered racial abuse, and the strength and security of Islam appeals to him, so it may not seem surprising that he falls in with Riaz's crowd. But Riaz is such an obvious maniac (a man for whom the fatwah is 'the least I would do to him') that Kureishi's use of him to represent the religious alternative to secu- lar life seems unbalanced. And for all his insecurity, Shahid, like most students, is fairly keen on the secular life. He is pas- sionate about pop music (the book's title is the name of a 'bootleg' Prince record), alcohol, drugs and sex. Why should he be sucked in by people who believe modern living is 'crazy slavery'? The other influence on Shahid is Deedee, also a caricature, a trendy cultural studies lecturer who is sexually liberated and knows where all the best raves are. Shahid and Deedee fall in love and he sets about running through a 'backlog' of years of sexual fantasies with her. The relation- ship is stretched from both sides, however, by Deedee's contempt for Riaz, and by Shahid's intuition that he is being patron- ised by his lecturer: He didn't always appreciate being played Madonna or George Clinton in class ... as if it were somehow more him than Fathers and Sons.

The novel plays out Shahid's choosing, between Riaz and Deedee, religious solidarity and sexual freedom, between reading books and reading aubergines. Other ingredients are tossed into the pot: Shahid's flash brother Chili, who acquires a cocaine habit and a slippery friend, Strap- per, who gives off an 'unmistakable atmo- sphere of wrongdoing, deceit and criminality'. These two pop in and out of the story, increasing the chaos and tension as the novel progresses. An IRA bombing campaign is described in terms which give the impression of British society teetering on the brink of ruin, but the idea is dropped too quickly to have an impact. Perhaps this is because it does not suit the tone of the novel, which lies in a peculiar limbo between black comedy and serious social criticism.

Kureishi's observational qualities are undone by his weakness for extremes. The decline of Chili from BMW-driving yuppie to gibbering addict is symptomatically exaggerated. For all its humour and its attempts to address the mixed problem of race and class which Shahid, an English- born Pakistani travel-agent's son, encapsu- lates, The Black Album is sabotaged by Hanif Kureishi's talent for caricature. We don't care enough because these people aren't real.