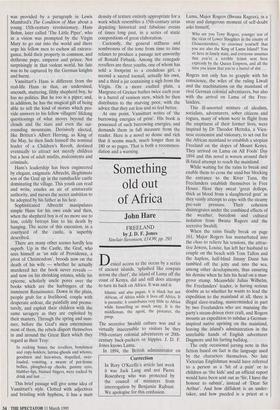 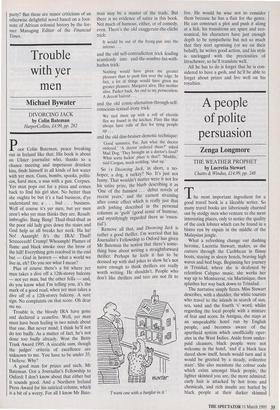 Something old out of Africa

FREELAND by J• D• F. Jones Sinclair-Stevenson, £14.99, pp. 293 Denied access to the ocean by a series of ancient islands, 'splashed like cowpats across the chart', the island of Lamu off the coast of Kenya, did and still does attempt to turn its back on Africa. It was and is

Islamic and also pagan, it is black but not African, of Africa while it lives off Africa. It is parasitic: it contributes very little to Africa while funnelling so much away. It is the middleman, the agent, the procurer, the pimp.

The secretive Swahili culture was and is virtually inaccessible to visitors be they 19th-century colonial adventurers or 20th- century back-packers or hippies. J. D. F. Jones knows Lamu.

In 1894, the British administrator on Lamu, Major Rogers (Bwana Ragees), in a stray and dangerous moment of self-doubt asks himself, Who are you Tony Rogers, younger son of the vicar of Lower Slaughter in the county of Gloucestershire, to convince yourself that you are also the King of Lamu Island? You sit here in lonely state, and everyone assumes that you're a terrible tyrant sent here expressly by the Queen Empress, and all the time you know that you're a barrel of shit .

Rogers not only has to grapple with his conscience, the wiles of the ruling Liwali and the machinations on the mainland of rival German colonial adventurers, but also with the arrival on Lamu of the Free- landers.

This ill-assorted mixture of idealists, socialists, adventurers, sober citizens and rogues, many of whom were in flight from the emptiness of their former lives, were inspired by Dr Theodor Hertzka, a Vien- nese economist and visionary, to set out for the African mainland to establish a utopian Freeland on the slopes of Mount Kenya. They arrived on Lamu on All Fools' Day 1894 and this novel is woven around their ill-fated attempt to reach the mainland.

While waiting for the rains to break and enable them to cross the sand-bar blocking the entrance to the River Tana, the Freelanders establish themselves in Free House. Here they sweat 'great dollops, thick as blood from a slaughtered goat' as they vainly attempt to cope with the steamy pre-rain pressure. Their cohesion disintegrates under the combined effects of the weather, boredom and cultural isolation from Bwana Ragees and the secretive Swahili.

When the rains finally break on page 161, Major Rogers has masturbated into the choo to relieve his tensions, the attrac- tive Jewess, Louise, has left her husband to couple on the beach with Tom Talton and the hapless, half-blind Jimmy Dunn has tumbled off the jetty and into the sea, among other developments, thus ensuring his demise when he hits his head on a man- grove stump. Meanwhile Julius Wilhelm, the Freelanders' leader, is having serious doubts as to whether he wants to lead the expedition to the mainland at all, there is illegal slave-trading, masterminded in part by two Freelanders who are manning the party's steam-driven river craft, and Rogers mounts an expedition to subdue a German- inspired native uprising on the mainland, leaving the island's administration in the unreliable hands of English adventurer Dugmore and his farting bulldog.

The only occasional jarring note in this fiction based on fact is the language used by the characters themselves. No late Victorian Englishman would have referred to a person as a 'bit of a pain' or to children as 'the kids' and an official report would have been sent out as 'Sir, I have the honour to submit', instead of 'Dear Sir Arthur'. And how diffident is an under- taker, and how puzzled is a priest at a party? But these are minor criticisms of an otherwise delightful novel based on a foot- note of African colonial history by the for- mer Managing Editor of the Financial Times.