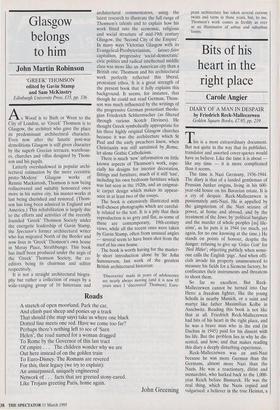 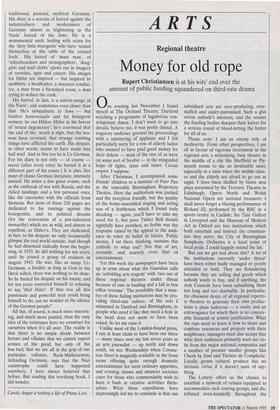 Bits of his heart in the right place

DIARY OF A MAN IN DESPAIR by Friedrich Reck-Malleczewen Golden Square Books, £7.95, pp. 219 This is a most extraordinary document. But not quite in the way that its publisher, translator and assorted cover-quotes would have us believe. Like the time it is about like any time — it is more complicated than it seems.

The time is Nazi Germany, 1936-1944. The diary is that of a landed gentleman of Prussian Junker origins, living in his 600- year-old house on his Bavarian estate. It is a cry of despair. Reck-Malleczewen is passionately anti-Nazi. He is appalled by the gangsterism of the Nazi seizure of power, at home and abroad, and by the treatment of the Jews: by 'political burglary and the murder of whole peoples [as] life- aims', as he puts it in 1944 (so much, yet again, for no one knowing at the time.) He stands on points of honour, despite the danger: refusing to give up 'Grass Gott' for `Heil Hitler'; objecting publicly when some- one calls the English 'pigs'. And when offi- cials invade his property unannounced to measure his fields for a Siemens factory, he confiscates their instruments and threatens to shoot them.

So far so excellent. But Reck- Malleczewen cannot be turned into Our Hero: a freedom fighter, like the young Scholls in nearby Munich, or a saint and martyr like father Maximilian Kolbe in Auschwitz. Reading this book is not like that at all. Friedrich Reck-Malleczewen had bits of his heart in the right place, and he was a brave man who in the end (in Dachau in 1945) paid for his dissent with his life. But the problem lies in why he dis- sented, and how; and that makes reading this diary a deeply disturbing experience.

Reck-Malleczewen was an anti-Nazi because he was more German than the Germans, almost more Nazi than the Nazis. He was a reactionary, elitist and monarchist, who harked back to the 1,000- year Reich before Bismarck. He was the real thing, which the Nazis copied and vulgarised: a believer in the true Heimat, a traditional, pastoral, mythical Germany. His diary is a scream of hatred against the industrialisers and modernisers of Germany almost as frightening as the Nazis' hatred of the Jews. He is a monumental snob, boiling with scorn for the 'dirty little bourgeois' who have 'seated themselves at the table of the evicted lords'. His hatred of 'mass man', of `schoolteachers and stenographers', 'drug- gists and mail clerks' spews out in imagery of termites, apes and cancer. His images for Hitler are inspired — but inspired by snobbery: a headwaiter, a streetcar conduc- tor, a man from a furnished room, a man trying to seduce the cook.

His hatred, in fact, is a mirror-image of the Nazis'; and sometimes even closer than that. He's sympathetic to Jews — but loathes homosexuals and fat bourgeois women; he out-Hitlers Hitler in his horror of 'sexual degeneracy'; he's convinced that the end of the world is nigh, that the sea- sons have reversed, that strange crawling things have afflicted the earth. His despair, in other words, seems to have made him half mad. And in this too he is Ur-German. For his diary is not only — of course secret (after every entry he buried it in a different part of his estate.) It is also, like most of classic German literature, intensely inward. He notes a few great events, such as the outbreak of war with Russia, and the Allied landings; and a few personal ones, like the encounter with the officials from Siemens. But most of these 210 pages are dedicated to his rantings against the bourgeoisie, and to political dreams (for the restoration of a pre-industrial monarchy) which are as wild, and almost as repellent, as Hitler's. They are dedicated, in fact, to his despair; we only occasionally glimpse the real world outside. And though he had dissented radically from the begin- ning, in 1933, he did nothing for ten years, until he joined a group of resisters in August 1943. He was, like so many Ur- Germans, a fatalist: as long as God or the Devil willed, there was nothing to be done. So he buried his despair on his estate; and for ten years restricted himself to refusing to say 'Heil Hitler'. If that was all this passionate and powerful man could bring himself to do, can we wonder at the silence of the German people?

All this, of course, is much more interest- ing, and much more painful, than the easy idea of the resistance hero we construct for ourselves when it's all over. The reality is that there is no simple divide between heroes and villains; that we cannot expect armies of the good, but only of the less bad; that we are all in the grip of our particular cultures. Reck-Malleczewen, defending Germany, says that the Nazi catastrophe could have happened anywhere. I have always believed that before. But reading this terrifying book, I did wonder.