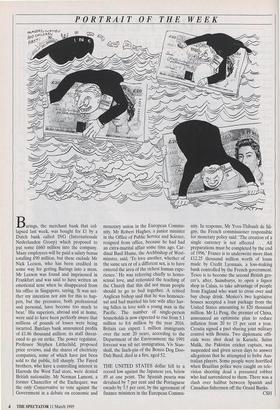 Barings, the merchant bank that col- lapsed last week, was bought for £1 by a Dutch bank called ING (Internationale Nederlanden Groep) which proposed to put some £660 million into the company. Many employees will be paid a salary bonus totalling £90 million, but these exclude Mr Nick Leeson, who has been credited in some way for getting Barings into a mess. Mr Leeson was found and imprisoned in Frankfurt and was said to have written an emotional note when he disappeared from his office in Singapore, saying, 'It was nei- ther my intention nor aim for this to hap- pen, but the pressures, both professional and personal, have become too much to bear.' His superiors, abroad and at home, were said to have been perfectly aware that millions of pounds of losses were being incurred. Barclays bank announced profits of £1.86 thousand million; its staff threat- ened to go on strike. The power regulator, Professor Stephen Littlechild, proposed price reviews, and the shares of electricity companies, some of which have just been sold to the public, fell sharply. The Fayed brothers, who have a controlling interest in Harrods the West End store, were denied British nationality. Mr Norman Lamont, a former Chancellor of the Exchequer, was the only Conservative to vote against the Government in a debate on economic and monetary union in the European Commu- nity. Mr Robert Hughes, a junior minister in the Office of Public Service and Science, resigned from office, because he had had an extra-marital affair some time ago. Car- dinal Basil Hume, the Archbishop of West- minster, said, 'To love another, whether of the same sex or of a different sex, is to have entered the area of the richest human expe- rience.' He was referring chiefly to homo- sexual love, and reiterated the teaching of the Church that this did not mean people should to go to bed together. A retired Anglican bishop said that he was homosex- ual and had married his late wife after hav- ing fallen in love with a young man in the Pacific. The number of single-person households is now expected to rise from 5.1 million to 8.6 million by the year 2016. Britain can expect 1 million immigrants over the next 20 years, according to the Department of the Environment; the 1991 forecast was nil net immigration. Viv Stan- shall, the linch-pin of the Bonzo Dog Doo- Dah Band, died in a fire, aged 52.

THE UNITED STATES dollar fell to a record low against the Japanese yen, below 89 at one point. The Spanish peseta was devalued by 7 per cent and the Portuguese escudo by 3.5 per cent, by the agreement of finance ministers in the European Commu- nity. In response, Mr Yves-Thibault de Sil- gny, the French commissioner responsible for monetary policy said: 'The creation of a single currency is not affected . . . All preparations must be completed by the end of 1996.' France is to underwrite more than £12.25 thousand million worth of loans made by Credit Lyonnais, a loss-making bank controlled by the French government. Tesco is to become the second British gro- cer's, after, Sainsburys, to open a liquor shop in Calais, to take advantage of people from England who want to cross over and buy cheap drink. Mexico's two legislative houses accepted a loan package from the United States amounting to $20 thousand million. Mr Li Peng, the premier of China, announced an optimistic plan to reduce inflation from 20 to 15 per cent a year. Croatia signed a pact sharing joint military control with Bosnia. Two diplomatic offi- cials were shot dead in Karachi. Salim Malik, the Pakistan cricket captain, was suspended and given seven days to answer allegations that he attempted to bribe Aus- tralian players. Some people were horrified when Brazilian police were caught on tele- vision shooting dead a presumed robber who had surrendered to them. There was a clash over halibut between Spanish and Canadian fishermen off the Grand Banks.