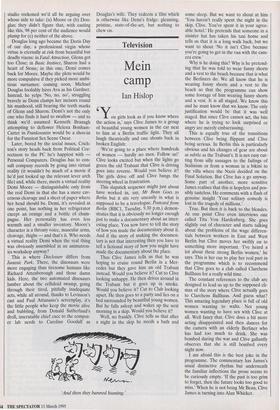 You girls look as if you know where the action is,' says Clive James to a group of beautiful young women in the car next to him at a Berlin traffic light. They all laugh theatrically and one shouts back in broken English: `We're going to a place where hundreds of women — hardly no men. Follow us!' Clive looks excited but when the lights go green the old Trabant that Clive is driving goes into reverse. Would you believe it? The girls drive off and Clive bangs the steering wheel in frustration.

Thus Clive James tells us that he was hoping to cruise round Berlin in a Mer- cedes but they gave him an old Trabant instead. Would you believe it? Cut to Clive looking unhappy. He then drives around in the Trabant but it goes up in smoke. Would you believe it? Cut to Club looking upset. He then goes to a party and lies on a bed surrounded by beautfiul young women. But he falls asleep and wakes up the next morning in a skip. Would you believe it? Well, no frankly. Clive tells us that after a night in the skip he needs a bath and some sleep. But we want to shout at him `You haven't really spent the night in the skip, Clive. You've spent it in your agree- able hotel.' He pretends that someone in a sinister hat has taken his taxi home and tells us that it is a long walk back, but we want to shout 'No it isn't Clive because you're going to get in the van with the cam- era crew.'

This is equally true of the transitions between Clive being flippant and Clive being serious. In Berlin this is particularly obvious and his changes of gear are about as subtle as the Trabant's. It is not easy cut- ting from silly sausages to the failings of Stalinism or from a woman in a bikini to the villa where the Nazis decided on the Final Solution. But Clive has a go anyway. Some part of another, more sensitive James realises that this is hopeless and pos- sibly tasteless. He comments with a flash of genuine insight 'Your solitary comedy is lost in the tragedy of millions.'

True. But then it is back to the blondes. At one point Clive even interviews one called Tita Von Hardenberg. She goes slightly out of character and starts talking about the problems of the wage differen- tials between workers in East and West Berlin but Clive moves her swiftly on to something more important. 'I've heard a lot about these strong Berlin women,' he says. This is her cue to play her real part in the programme which is to recommend that Clive goes to a club called Clarchens Ballhaus for a really wild time.

The constant references to the club are designed to lead us up to the supposed cli- max of the story where Clive actually goes to Clarchens Ballhaus. And guess what? This amazing legendary place is full of old women wanting to waltz. Not young women wanting to have sex with Clive at all. Well fancy that. Clive does a bit more acting disappointed and then dances for the camera with an elderly Berliner who has had too much to drink. She was bombed during the war and Clive gallantly observes that she is still bombed every night now.

I am afraid this is the best joke in the programme. The commentary has James's usual distinctive rhythm but underneath the familiar inflections the prose seems to be curiously empty. 'If the past is too grim to forget, then the future looks too good to miss.' When he is not being Mr Bean, Clive James is turning into Alan Whicker.