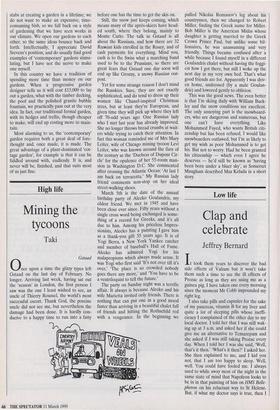 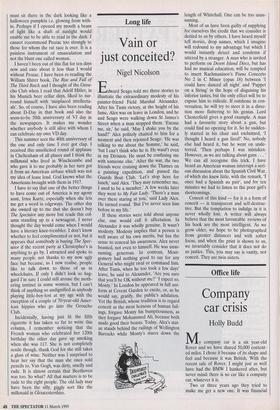 It took them years to discover the bad side effects of Valium but it won't take them such a time to see the ill effects of Prozac as long as they are using me as a guinea pig. I have taken one every morning since the moment Mr Cobb impounded my right leg.

I also take pills and capsules for the sake of my pancreas, vitamin B for my liver and quite a lot of sleeping pills whose ineffi- ciency I complained of the other day to my local doctor. I told her that I was still wak- ing up at 3 a.m. and asked her if she could give me an alternative to Temazepam and she asked if I was still taking Prozac every day. When I told her I was she said, 'Well, that's it then.' What's it then?' I asked her. She then explained to me, and I kid you not, that I am too happy to sleep. Well, well. You could have fooled me. I always used to while away most of the night in the same state of mind that Napoleon looks to be in in that painting of him on HMS Belle- pheron on his reluctant way to St Helene. But, if what my doctor says is true, then I must sit there in the dark looking like a halloween pumpkin i.e. glowing from with- in. Perhaps if I opened my mouth a beam of light like a shaft of sunlight would enable me to be able to read in the dark. I cannot recommend Prozac too strongly to those for whom the rat race is over. It is a painless instrument of emasculation and not the blunt one called woman.

I haven't been out of this flat for ten days now and care about it less than I would without Prozac. I have been re-reading the William Shirer book, The Rise and Fall of The Third Reich and I thought of the Grou- cho Club when I read that Adolf Hitler, in his Munich beer cellar days, liked to sur- round himself with 'misplaced intellectu- als'. So, of course, I have also been reading about D-Day in that book and also the soon-to-be 50th anniversary of VJ day in the newspapers. It makes me wonder whether anybody is still alive with whom I can celebrate my own VD day.

This summer sees the 40th anniversary of the one and only time I ever got clap. I received this unsolicited round of applause in Cheltenham of all places and I think the milkmaid who lived in Winchcombe and who gave it to me probably in her turn got it from an American airbase which was not my idea of lease lend. God knows what the Americans brought with them in 1917.

I have to say that one of the better things to have come out of America is my agony aunt, Irma Kurtz, especially when she lets me get a word in edgeways. The other day she owned up to me that she doesn't buy The Spectator any more but reads this col- umn standing up in a newsagent. I never thought the day would come when I would have a literary knee-trembler. I don't know whether to feel complimented or not, but it appears that somebody is buying The Spec- tator if the recent party at Christopher's is anything to go by. I attracted and spoke to many people not thanks to my now ugly face but because, as I now realise, people like to talk down to those of us in wheelchairs. If only I didn't look so hag- gard I'm sure I could still arouse the moth- ering instinct in some women, but I can't think of anything so undignified as anybody playing little-boy-lost at my age with the exception of a couple of 70-year-old Amer- ican hippies who go into the Groucho Club.

Incidentally, having just lit the fifth cigarette it has taken so far to write this column, I remember noticing that the French woman who celebrated her 120th birthday the other day gave up smoking when she was 117. She is not completely senile though, thank God for she still takes a glass of wine. Neither was I surprised to hear her say that the man she once sold pencils to, Van Gogh, was dirty, smelly and rude. It is almost certain that Beethoven was too. So what? All that matters is to be rude to the right people. The old lady may have been the silly, giggly sort like the milkmaid in Gloucestershire.