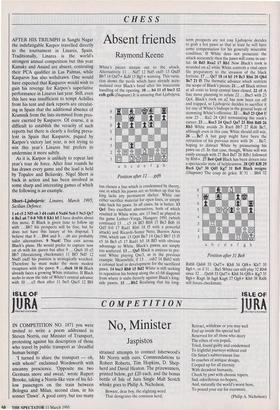 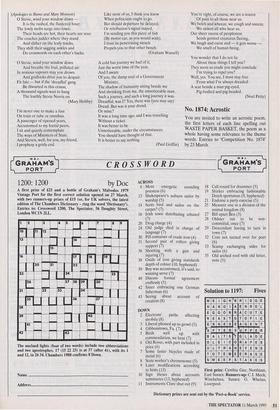 IN COMPETITION NO. 1871 you were invited to write a poem addressed to Steven Norris, our Minister of Transport, protesting against his description of those who travel by public transport as 'dreadful human beings'.

turned to share the transport — oh, with whom!' exclaimed Wordsworth with uncanny prescience. 'Opposite me two Germans snore and sweat,' wrote Rupert Brooke, taking a Norris-like view of his fel- low passengers on the train between Bologna and Milan, second class, in his sonnet 'Dawn'. A good entry, but too many strained attempts to connect Isherwood's Mr Norris with ours. . Commendations to Robert Roberts, Tim Hopkins, D. Shep- herd and David Heaton. The prizewinners, printed below, get £20 each, and the bonus bottle of Isle of Jura Single Malt Scotch whisky goes to Philip A. Nicholson.

Beware, dear boy, the slighting word That denigrates the common herd; Retract, withdraw or you may well End up inside the special hell Reserved for all those who decry The ethos of vox populi, Tried, found guilty and condemned To frightful journeys without end On Satan's subterranean line In coaches of antique design, Cooped up for all eternity With decadent humanity, Cheek by jowl with chronic topers, Sad, odoriferous no-hopers, And, naturally the world's worst bore, To pound your ear for evermore.

(Philip A. Nicholson) (Apologies to Burns and Mary Morison)

0 Stevie, wind your window down -

It is the rushed, the flustered hour; The lowly mobs surge into town, Their heads are hot, their hearts arc sour.

The coaches judder where they stand And slither on the leafy tracks, They shift their sagging ankles and Do crosswords on each other's backs.

Ct Stevie, wind your window down And breathe the foul, polluted air: In noxious vapours may you drown And gridlocks drive you to despair.

Fit fate — but if the 'dreadful' gang Be thwarted in this orison, A thousand signals wait to hang The loathly Stevie Norris on.

(Mary Holtby) I'm never one to make a fuss On train or tube or omnibus.

A passenger of ripened years, Accustomed to my foetid peers,

I sit and quietly contemplate

The ways of Ministers of State.

And Steven, well, for you, my friend, I prophesy a grisly end.

When politicians ought to go.

But should departure be delayed, Or retribution's signal stayed, I'm sending you this piece of fish (By motor-car, as you would wish).

I trust its penetrating stench Propels you to that other bench.

(Graham Wassell) A cold bus journey we had of it, Just the worst time of the year,

Of you, the damp soul of a Government Minister, The shadow of humanity sitting beside me And shrinking from me, the unnoticeable man.

Such a journey, and such a long journey it was.

Dreadful, was I? Yes, there was (you may say)

Dread. But was it your dread, Or mine?

It was a long time ago, and I was travelling

It was better to be Unnoticeable, under the circumstances.

You should have thought of that.

It is better to say nothing. (Paul Griffin) You're right, of course, we are a source Of pain to all those near us.

We belch and wheeze, we cough and sneeze, We sicken all who hear us.

Our sheer excess of peopleness Sends genteel creatures fleeing, We laugh and curse and — it gets worse — We smell of human being.

You wonder that I do not lie About these things I tell you?

They seem so crude you might conclude I'm trying to repel you?

Well, yes. You see, I must stay free From what I've always dreaded: A seat beside a man pig-eyed, Pig-bodied and pig-headed. (Noel Petty)

You are invited to write an acrostic poem, the first letters of each line spelling out WASTE PAPER BASKET, the poem as a whole having some relevance to the theme words. Entries to 'Competition No. 1874' by 23 March.