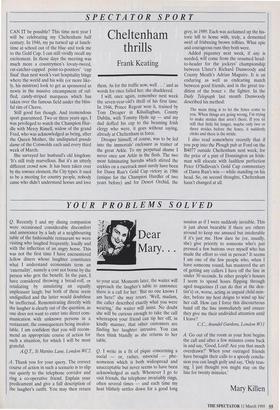 CAN IT be possible? This time next year I will be celebrating my Cheltenham half century. In 1946, my pa turned up at lunch- time at school out of the blue and took me to the Gold Cup. I can still vividly recall my excitement. In those days the meeting was much more a countrymen's lovaty-tweed, rat-catcher-capped point-to-pointers' cup final' than next week's vast hospitality binge where the world and his wife (or more like- ly, his mistress) look to get as sponsored as newts in the massive encampment of ruf- fled, candy-striped marquees which has taken over the famous field under the bliss- ful rim of Cleeve.

Still good fun though. And tremendous sport guaranteed. Two or three years ago, I was privileged to watch the Champion Hur- dle with Mercy Rimell, widow of the grand Fred, who was acknowledged as being, after the Queen Mother, the undisputed grande dame of the Cotswolds each and every third week of March.

She surveyed her husband's old kingdom: It's still truly marvellous. But it's an utterly different crowd now. It has been taken over by the townee element, the City types: it used to be a meeting for country people, nobody came who didn't understand horses and love them. As for the traffic now, well . . .' and as words for once failed her, she shuddered.

I will, once again, remember next week the seven-year-old's thrill of his first time. In 1946, Prince Regent won it, trained by Tom Dreaper in Kilsallaghan, County Dublin, with Tommy Hyde up — and my dad doffed his cap to the beaming Irish clergy who were, it goes without saying, already at Cheltenham in force.

Dreaper himself, of course, was to be led into the immortals' enclosure as trainer of the great Arkle. To my perpetual shame I never once saw Aride in the flesh. The two most fulminating hurrahs which stirred the cockles on a racetrack must surely have been for Dawn Run's Gold Cup victory in 1986 (unique for the Champion Hurdler of two years before) and for Desert Orchid, the grey, in 1989. Each was acclaimed up the his- toric hill to home with, truly, a demented swirl of frisbeeing brown trilbies. What epic and courageous runs they both were.

Added piquancy next week, if any is needed, will come from the resumed head- to-header for the jockeys' championship between Ulster's Richard Dunwoody and County Meath's Adrian Maguire. It is an enduring as well as endearing match between good friends, and in the great tra- dition of the boxer v. the fighter. In the Daily Telegraph last month Dunwoody described his method:

The main thing is to let the fence come to you. When things are going wrong, I'm trying to make strides that aren't there. If you sit still that little bit longer, maybe only two or three strides before the fence, it suddenly clicks and there is the stride.

I also read somewhere recently that if you pop into the Plough pub at Ford on the B4077 outside Cheltenham next week, for the price of a pint of Donnington an Irish- man will elocute with faultless perfection Peter O'Sullevan's Gold Cup commentary of Dawn Run's win — while standing on his head. So, on second thoughts, Cheltenham hasn't changed at all.