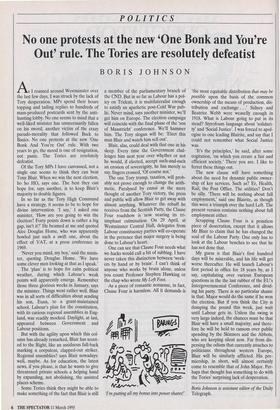 No one protests at the new 'One Bonk and You're Out' rule. The Tories are resolutely defeatist

AI roamed around Westminster over the last few days, I was struck by the lack of Tory desperation. MPs spend their hours topping and tailing replies to hundreds of mass-produced postcards sent by the anti- hunting lobby. No one seems to mind that a well-liked minister has unnecessarily fallen on his sword, another victim of the crazy pseudo-morality that followed Back to Basics. No one protests at the new 'One Bonk And You're Out' rule. With two years to go, the mood is one of resignation, not panic. The Tories are resolutely defeatist.

Of the Tory MPs I have canvassed, not a single one seems to think they can beat Tony Blair. When we win the next election, ho ho HO, says one. The best they can hope for, says another, is to keep Blair's majority to double figures.

In so far as the Tory High Command have a strategy, it seems to be to hope for divine intervention. 'I say,' I asked one minister, 'How are you going to win the election? Forty points down is rather a big gap, isn't it?' He beamed at me and quoted Alec Douglas Home, who was apparently bowled just such a swift one, about the effect of VAT, at a press conference in 1969.

`Never you mind, my boy,' said the minis- ter, quoting Douglas Home. 'We have some clever men looking at that as I speak.'

The 'plan' is to hope for calm political weather, during which Labour's weak points will apparently emerge. Remember those three glorious weeks in January, says the minister. Things went rather well. Blair was in all sorts of difficulties about sending his son, Euan, to a grant-maintained school. Labour's plan for the constitution, with its curious regional assemblies in Eng- land, was readily mocked. Daylight, at last, appeared between Government and Labour positions.

But with the agility upon which this col- umn has already remarked, Blair has scoot- ed to the Right, like an assiduous full-back marking a corpulent, clapped-out striker. Regional assemblies? says Blair nowadays: well, maybe. As for education, the latest news, if you please, is that he wants to give threatened private schools a helping hand by expanding, not abolishing, the assisted places scheme.

Some Tories think they might be able to make something of the fact that Blair is still a member of the parliamentary branch of the CND. But in so far as Labour has a pol- icy on Trident, it is multilateralist enough to satisfy an apathetic post-Cold War pub- lic. Never mind, says another minister, we'll get him on Europe. The election campaign will coincide with the final phase of the 'son of Maastricht' conference. We'll hammer him. The Tory slogan will be: 'Elect this man Blair and watch him sell out'.

Blair, alas, could deal with that one in his sleep. Every time the Government chal- lenges him next year over whpther or not he would, if elected, accept such-and-such an erosion of sovereignty, he has merely to say, fingers crossed, 'Of course not.' The one Tory trump, taxation, will prob- ably not prove enough to change the arith- metic. Paralysed by ennui at the mere thought of another Tory victory, the press and public will allow Blair to get away with almost anything. Whatever the rebuff he receives from the Scottish Party, the Clause Four roadshow is now nearing its tri- umphant culmination. On 29 April, at Westminster Central Hall, delegates from Labour constituency parties will co-operate in the pretence that major surgery is being done to Labour's heart.

One can see that Clause Four needs what we hacks would call a bit of subbing. I have never taken this distinction between 'work- ers by hand or by brain'. I can't think of anyone who works by brain alone, unless you count Professor Stephen Hawking or the chap who wrote My Left Foot. As a piece of romantic nonsense, in fact, Clause Four is harmless. All it demands is I'm putting all my bonus into power shares!' `the most equitable distribution that may be possible upon the basis of the common ownership of the means of production, dis- tribution and exchange . . .' Sidney and Beatrice Webb were weaselly enough in 1918. What is Labour going to put in its stead? Styrofoam language about 'solidari- ty' and 'Social Justice'. I was forced to apol- ogise to one leading Blairite, and say that I could not remember what Social Justice was.

`It's the principles,' he said, after some cogitation, 'on which you create a fair and efficient society.' There you are. I like to ferret these things out.

Scrapping Clause Four is a pointless piece of desecration, except that it allows Mr Blair to claim that he has changed the soul of the Labour Party. One only has to look at the Labour benches to see that he has not done that.

My guess is that Blair's first hundred days will be miserable, and his life will get worse thereafter. He will launch Labour's first period in office for 18 years by, as I say, capitulating over various European questions in the the last rubber of the EU's Intergovernmental Conference, and divid- ing his party. There is no particular shame in that: Major would do the same if he won the election. But if you think the City is dumping the pound this week, just wait until Labour gets in. Unless the swing is very large indeed, the chances must be that Blair will have a small majority; and there- fore he will be held to ransom over public spending by the Skinners and the Abbots, who are keeping silent now. Far from dis- persing the odium that currently attaches to politicians throughout western Europe, Blair will be similarly afflicted. His pre- miership, in short, will almost certainly come to resemble that of John Major. Per- haps that thought has something to do with the Tories' surprising lack of desperation.