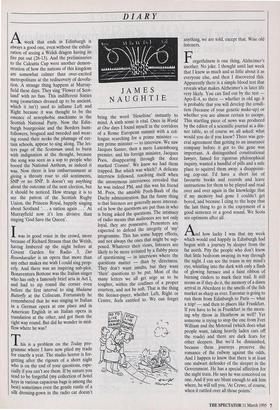 JAMES NAUGHTIE Aweek that ends in Edinburgh is always a good one, even without the exhila- ration of seeing a Welsh dragon having its fire put out (26-13). And the preliminaries to the Calcutta Cup were another demon- stration of how the nations of this kingdom are somewhat calmer than over-excited metropolitans at the rediscovery of devolu- tion. A strange thing happens at Murray- field these days. They sing 'Flower of Scot- land' with no fuss. This indifferent Sixties song (sometimes dressed up to be ancient, which it isn't) used to inflame Left and Right because it was thought to be the essence of xenophobic machismo in the Scottish National Party. Now the Edin- burgh bourgeoisie and the Borders hunt- followers, brogued and tweeded and wear- ing round their necks the plumage of cer- tain schools, appear to sing along. The let- ters page of the Scotsman used to burst with indignation at the thought, because the song was seen as a sop to people who booed the National Anthem, as indeed it was. Now there is less embarrassment at giving a throaty roar to old sentiments, SNP or no SNP. It doesn't say anything about the outcome of the next election, but it should be noticed. How strange it is to see the patron of the Scottish Rugby Union, the Princess Royal, happily singing about Scotland `. . . a nation again . . .' At Murrayfield now it's less divisive than singing 'God Save the Queen'.

Iwas in good voice in the crowd, more because of Richard Strauss than the Welsh, having limbered up the night before at Covent Garden for Radio 3. Der Rosenkavalier is an opera that more than any other makes me wish I could sing prop- erly. And there was an inspiring sub-plot. Bonaventura Bottone was the Italian singer who has only a famously brief aria in Act I, and had to zip round the corner even before the first interval to sing Madame Butterfly at the Coliseum. Fortunately he remembered that he was singing in Italian in a German opera at one place and in American English in an Italian opera in translation at the other, and got them the right way round. But did he wonder in mid- flow where he was?

This is a problem on the Today pro- gramme where I have now plied my trade for exactly a year. The studio horror is for- getting after the rigours of a short night who is on the end of your questions, espe- cially if you can't see them. If by nature you tend to be forgetful (my collection of hotel keys in various capacious bags is among the best) sometimes even the gentle rustle of a silk dressing-gown in the radio car doesn't bring the word lleseltine' instantly to mind. A sixth sense is vital. Once in World at One days I found myself in the corridors of a Rome European summit with a col- league searching for a prime minister any prime minister — to interview. We saw Jacques Santer, then a mere Luxembourg premier, and his foreign minister, Jacques Poos, disappearing through the door marked Vominf . We knew we had them trapped. But which was which? A delicate interview followed, resolving itself when the anonymous interviewee revealed that he was indeed PM, and this was his friend M. Poos, the amiable Pooh-Baah of the Duchy administration. But the funny thing is that listeners are generally more interest- ed in how the questions are put than in who is being asked the questions. The intimacy of radio means that audiences are not only loyal, they are possessive. Presenters are expected to defend the integrity of 'my' programme. This has some happy effects, and not always the ones that might be sup- posed. Whatever their views, listeners are likely to be more irritated by a flabby piece of questioning — in interviews where the questions matter — than by directness. They don't want insults, but they want `their' questions to be put. Most of the many letters we all get urge us to be tougher, within the confines of a proper courtesy, and not be soft. That is the thing the licence-payer, whether Left, Right or Centre, feels entitled to. We can forget anything, we are told, except that. Wise old listeners.

Forgetfulness is one thing, Alzheimer's another. No joke. I thought until last week that I knew as much and as little about it as everyone else, and then I discovered this. Apparently there is a simple blood test that reveals what makes Alzheimer's in later life very likely. You can find out by the test Apo-E-4, so there — whether in old age it is probable that you will develop the condi- tion (because of your genetic make-up) or whether you are almost certain to escape. This startling piece of news was produced by the editor of a scientific journal at a din- ner table, so of course we all asked: what would you do if you knew? There was gen- eral agreement that getting to an insurance company before it got to the gene was important. A distinguished constitutional lawyer, famed for rigorous philosophical inquiry, wanted a handful of pills and a safe place to squirrel them away: a disappoint- ing cop-out. I'd have a short list of favourite books and records and leave instructions for them to be played and read over and over again in the knowledge that if my memory had gone I couldn't get bored, and because I cling to the hope that the last thing to go is the enjoyment of a good sentence or a good sound. We Scots are optimists after all.

AK, how lucky I was that my week which would end happily in Edinburgh had begun with a journey by sleeper from the far north. Pity the people who don't know that little bedroom swaying its way through the night. I can see the trains in my mind's eye, whistling into the dark with only a flash of glowing furnace and a faint ribbon of burning cinders to mark their trail. It still seems as if they do it, the memory of a dawn arrival in Aberdeen to the smells of the fish market as sharp as ever. Eurostar is going to run them from Edinburgh to Paris — what a trip! — and then to places like Frankfurt. If you have to be in Frankfurt in the morn- ing why throw in Heathrow as well? Yet someone is trying to stop the one from Fort William and the Motorail (which does what people want, taking heavily laden cars off the roads) and there are dark fears for other sleepers. But we'd be diminished, because these journeys preserve the romance of the railway against the odds. And I happen to know that there is at least one stalwart defender of the sleeper in the Government. He has a special affection for the night train. He says he was conceived on one. And if you are blunt enough to ask him where, he will tell you, 'At Crewe, of course, when it rattled over all those points.'