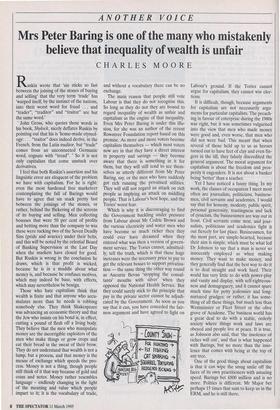 Ruskin wrote that 'sin sticks so fast between the joining of the stones of buying and selling' that the very term 'trade' has warped itself, by the instinct of the nations, into their worst word for fraud .. . and "trader", "traditor" and "traitor" are but the same word.'

John Gross, who quotes these words in his book, Shylock, nicely deflates Ruskin by pointing out that his is 'home-made etymol- ogy: . . . "traitor" does indeed derive, in the French, from the Latin traditor, but "trade" comes from an unconnected Germanic word, cognate with "tread". ' So it is not only capitalists that come unstuck over derivatives.

I feel that both Ruskin's assertion and his linguistic error are eloquent of the problem we have with capitalism. For he is right: even the most hardened free marketeer contemplating the fall of Barings would have to agree that sin stuck pretty fast between the joinings of the stones, or rather, behind the flickering of the screens of its buying and selling. Men collecting bonuses that were 50 per cent of profits and betting more than the company to win these were tucking two of the Seven Deadly Sins (pride and avarice) under their belts, and this will be noted by the celestial Board of Banking Supervision at the Last Day when the markets have closed for good. But Ruskin is wrong in the conclusion he draws, which is that profit is wicked, because he is in a muddle about what money is, and because he confuses motives, which may indeed be base, with effects, which may nevertheless be benign.

Those who hate capitalism think that wealth is finite and that anyone who accu- mulates more than he needs is robbing somebody else. They think Shakespeare was advancing an economic theory and that the Jew who insists on his bond is, in effect, cutting a pound of flesh off a living body. They believe that the men who manipulate money are the incorrigible exploiters of the men who make things or grow crops and eat their bread in the sweat of their brow. They do not understand that wealth is not a lump, but a process, and that money is the means of exchange which speeds the pro- cess. Money is not a thing, though people still think of it that way because of gold and coins and notes. Money rather resembles language - endlessly changing in the light of the meaning and value which people impart to it; it is the vocabulary of trade, and without a vocabulary there can be no exchange.

The main reason that people still vote Labour is that they do not recognise this. So long as they do not they are bound to regard inequality of wealth as unfair and capitalism as the engine of that inequality. Even Mrs Peter Baring is under this illu- sion, for she was an author of the recent Rowntree Foundation report based on this premise. As more and more voters become capitalists themselves — which most voters now are in that they have a direct interest in property and savings — they become aware that there is something in it for them, but they will still tend to see them- selves as utterly different from Mr Peter Baring, say, or the men who have suddenly got rich running the privatised utilities. They will still not regard an attack on rich people as implying an attack on middling people. That is Labour's best hope, and the Tories' worst fear.

Which is why it is discouraging to find the Government buckling under pressure from Labour about Mr Cedric Brown and the various electricity and water men who have become so much richer then they could ever have dreamed when they entered what was then a version of govern- ment service. The Tories cannot, admitted- ly, tell the truth, which is that these huge increases were the necessary price to pay to get the relevant bosses to support privatisa- tion — the same thing the other way round as Aneurin Bevan 'stopping the consul- tants' mouths with silver' when they opposed the National Health Service. But they could surely stick to the principle that pay in the private sector cannot be adjudi- cated by the Government. As soon as you say that it can, you have conceded the fair- ness argument and have agreed to fight on Labour's ground. If the Tories cannot argue for capitalism, they cannot win elec- tions.

It is difficult, though, because arguments for capitalism are not necessarily argu- ments for particular capitalists. The preach- ing in favour of enterprise during the 1980s was right, but it was sometimes vulgarised into the view that men who made money were good and, even worse, that men who did not were bad. This meant that when several of those held up to us as heroes turned out to have feet of clay and even fin- gers in the till, they falsely discredited the general argument. The moral argument for capitalism is about the freedom and pros- perity it engenders. It is not about a banker being 'better' than a teacher.

Yet I have noticed a funny thing. In my work, the classes of occupation I meet most often are journalists, politicians, business- men, civil servants and academics. I would say that for honesty, modesty, public spirit, personal generosity, trustingness and lack of cynicism, the businessmen are way out in front. Civil servants come next, and jour- nalists, politicians and academics fight it out fiercely for last place. Businessmen, for the most part, are simple-hearted, because their aim is simple, which must be what led Dr Johnson to say that a man is never so innocently employed as when making money. They want to make money, and they generally find that the best way to do it is to deal straight and work hard. Their world has very little to do with power-play and vanity and display, with self-righteous- ness and demagoguery, and it cannot spare much time for petty jealousies and long- nurtured grudges; or rather, it has some- thing of all these things, but much less than Westminster or Fleet Street or the olive grove of Academe. The business world has a great deal to do with a stable, orderly society where things work and laws are obeyed and people live at peace. It is true, as Johnson also said, that 'the insolence of riches will out', and that is what happened with Barings, but no more than the inso- lence that comes with being at the top of any tree.

One of the good things about capitalism is that it can wipe the smug smile off the faces of its own practitioners with amazing speed. Barings bet £800 million and is no more. Politics is different. Mr Major bet perhaps 15 times that sum to keep us in the ERM, and he is still there.