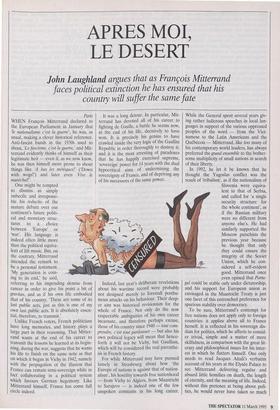 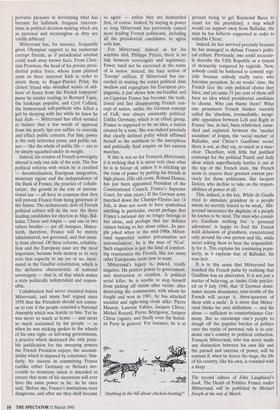 Paris WHEN Francois Mitterrand declared to the European Parliament in January that le nationalisme c'est la guerre', he was, as usual, making a clever historical reference. Anti-fascist bands in the 1930s used to shout, `Le fascisme, c'est la guerre,' and Mit- terrand evidently thinks of himself as their legitimate heir — even if, as we now know, he was then himself more prone to shout things like 'A has les meteques!' Mown with wogs!') and later even `live le marechar Unlike French voters, French politicians have long memories, and history plays a large part in their reasoning. That Mitter- rand wants at the end of his career to transmit the lessons he learned at its begin- ning, during the war, suggests that he wants his life to finish on the same note as that on which it began in Vichy in 1942, namely with the propagation of the illusion that France can remain semi-sovereign while in fact collaborating in a political system which favours German hegemony. Like Mitterrand himself, France has come full circle indeed. It was a long detour. In particular, Mit- terrand has devoted all of his career to fighting de Gaulle, a battle he seems now, at the end of his life, decisively to have won. It is precisely his genius to have crawled inside the very logic of the Gaullist Republic in order thoroughly to destroy it; and it is the most arresting of paradoxes that he has happily exercised supreme, `sovereign' power for 14 years with the dual hypocritical aims of undermining the sovereignty of France, and of depriving any of his successors of the same power.

Indeed, last year's deliberate revelations about his wartime record were probably not designed merely to forestall posthu- mous attacks on his behaviour. Their deep- er aim was historical revisionism for the whole of France. Not only do the now respectable ambiguities of his own career incarnate, and therefore perhaps excuse, those of his country since 1940 — tout corn- prendre, c'est tout pardonner — but also his own political legacy will mean that hence- forth it will not be Vichy, but Gaullism, which will be considered the real parenthe- sis in French history.

For while Mitterrand may have punned lamely in Strasbourg about how 'the Europe of nations is against that of nation- alism', his hostility towards free nationhood — from Vichy to Algiers, from Maastricht to Sarajevo — is indeed one of the few unspoken constants in his long career.

While the General spent several years giv- ing rather ludicrous speeches in local lan- guages in support of the various oppressed peoples of the word — from the Viet- namese to the Latin Americans and the Quebecois — Mitterrand, like too many of his contemporary world leaders, has always preferred the grand ensemble to the bother- some multiplicity of small nations in search of their liberty.

To be sure, Mitterrand's contempt for free nations does not apply only to foreign countries: it applies above all to France herself. It is reflected in his sovereign dis- dain for politics, which he affects to consid- er trivial, simple and a matter of mere skilfulness, in comparison with the great lit- erary and philosophical issues for his inter- est in which he flatters himself. One only needs to read Jacques Attali's verbatim account of his years at the Elysee Palace to see Mitterrand delivering regular and absurd little homilies on death, the length of eternity, and the meaning of life. Indeed, without this pretence at being above poli- tics, he would never have taken so much perverse pleasure in developing what has become his hallmark: frequent interven- tions in political decision-making which are as personal and meaningless as they are totally arbitrary.

Mitterrand has, for instance, frequently given Olympian support to his numerous corrupt friends, as if presidential unction could wash away known facts. From Chris- tian Prouteau, the head of his private presi- dential police force, whose team planted arms on three innocent Irish in order to arrest them; to Roger-Patrice Pelat, his closest friend who swindled scores of mil- lions of francs from the French taxpayers' purse by insider trading; to Bernard Tapie, the bankrupt populist; and Cyril Collard, the homosexual self-publicist who killed a girl by sleeping with her while he knew he had Aids — Mitterrand has often seemed to believe that a few words of approval from his pearly lips can suffice to override and efface public concern. For him, power is the only reference point, and public val- ues — like the whole of public life — are to be simply squashed under its weight.

Indeed, his erosion of French sovereignty abroad is only one side of the coin. The few political reforms with which he is credited — decentralisation, European integration, monetary rigour and the independence of the Bank of France, the practice of 'cohabi- tation', the growth in the role of interna- tional law — all have in common that they will prevent France from being governed in the future. The technocratic drift of French political culture will do the rest: the three leading candidates for election in May, Bal- ladur, Chirac and Jospin — and one or two others besides — are all Marques. Hence- forth, therefore, France will be merely administered, not governed, and that main- ly from abroad. Of these reforms, cohabita- tion and the European issue are the most important, because both destroy at its very root that capacity to say yes or no, incar- nated in the Gaullist constitution, which is the definitive characteristic of national sovereignty — that is, of that which makes a state politically independent and respon- sible.

Cohabitation had never occurred before Mitterrand, and many had argued since 1958 that the President should not contin- ue to rule if the people returned a National Assembly which was hostile to him. Yet he was never so much at home — and never so much acclaimed by his people — as when he was sticking spokes in the wheels of his own right- or left-wing governments, a practice which destroyed the only possi- ble justification for the sweeping powers the French President enjoys, the account- ability which is imposed by coherence. Sim- ilarly, his success in committing France (unlike either Germany or Britain) irre- versibly to monetary union is intended to ensure that none of his successors will ever have the same power as he. As he once said, 'Before me, France's institutions were dangerous, and after me they shall become

so again' — unless they are dismantled first, of course. Indeed, by staying in power so long Mitterrand has perversely caused most leading French politicians, including all the presidential candidates, to agree with him.

For Mitterrand, indeed, as for his wartime idol, Philippe Petain, there is no link between sovereignty and legitimacy. Power need not be exercised in the name of la nation: instead, the hazy notion of `Europe' suffices. If Mitterrand has suc- ceeded in making the entire political class swallow and regurgitate his European pro- paganda, it just shows how un-Gaullist and un-Capetian France has become: the tradi- tional and fast disappearing French con- cept of nation, unlike the German concept of Volk, was always eminently political. Unlike Germany, which is an ethnic group, France is supposed to be an idea, a nation created by a state. She was indeed precisely that clearly defined polity which affirmed herself as the antithesis to the amorphous and politically fluid empire on her eastern marches.

If this is not so for Francois,Mitterrand, it is striking that it is never very clear what he is in favour of, unless it is stitching up the reins of power by putting his friends in high places. (His old crony, Roland Dumas, has just been appointed President of the Constitutional Council, France's Supreme Court, for nine years.) If the German army marched down the Champs-Elysees last 14 July, it does not seem to have symbolised anything in particular, except perhaps that France's national day no longer belongs to her alone, and perhaps that her defence cannot belong to her alone either. As peo- ple joked when in the mid-1980s Mitter- rand supported 'neither privatisation nor nationalisation', he is the man of

Such stagnation is just the kind of comfort- ing reassurance the French, like too many other Europeans, seem now to want. Mitterrand's legacy is, indeed, totally negative. He prefers power to government, and destruction to creation. A political serial killer, he is unable to stop himself from picking off victim after victim: after destroying the communists, with whom he fought and won in 1981, he has attacked socialist and right-wing rivals alike: Pierre Mauroy, Laurent Fabius, Jacques Chirac, Michel Rocard, Pierre Beregovoy, Jacques Chirac (again), and finally even the Social- ist Party in general. For instance, he is at `Anything in the bill about chicken-hunting?' present trying to get Raymond Barre to stand for the presidency, a step which would cut support away from Balladur, the man he has hitherto supported in order to enfeeble Chirac.

Indeed, he has survived precisely because he has managed to debase France's politi- cal culture. Previously, one could accurate- ly describe the Fifth Republic as a system of monarchy tempered by regicide. Now, nobody could be bothered to commit regi- cide because nobody really cares who becomes president. In six weeks' time, the French face the only political choice they have, and yet some 55 per cent of them still have no idea which presidential candidate to choose. Who can blame them? What one prominent French thinker recently called the 'absolute, irremediable, inexpi- able opposition between Left and Right in France' has, in fact, been relativised, reme- died and expiated: between the 'market socialism' of Jospin, the 'social market' of Balladur, and Chirac's Gaullisme social, there is not, as they say, so much as a mou- choir. Therefore, with little but justified contempt for the political Punch and Judy show which superfluously battles it out at the top of the French state, the French seem to reserve their greatest esteem pre- cisely for those politicians, like Jacques Delors, who decline to take on the respon- sibilities of power at all.

This, indeed, is the key. While de Gaulle tried to stimulate grandeur in a people whom he secretly feared to be weak, Mit- terrand incarnates the duplicity of a people he knows to be tired. The man who consid- ers Gaullism nothing but 'a personal adventure' is happy to feed the French mild delusions of grandness, concentrated only around his own person and life, while never asking them to bear the responsibili- ty for it. This explains his continuing popu- larity, as it explains that of Balladur, his true heir.

It is in this sense that Mitterrand has touched the French pulse by realising that Gaullism was an aberration. It is not just a matter of believing, as Andre Gide predict- ed on 9 July 1940, that 'if German domi- nance means abundance, nine-tenths of the French will accept it, three-quarters of them with a smile'. It is more that Mitter- rand thinks his own skilfulness — and his alone — sufficient to counterbalance Ger- many. But to encourage one's people to slough off the popular burden of politics onto the vanity of personal rule is to con- demn one's country to political extinction. Frangois Mitterrand, who has never made any distinction between his own life and the pursuit and exercise of power, will be content if, when he leaves the stage, the life of his country, like his own, is rounded with a sleep.

The second edition of John Laughland's book, The Death of Politics: France under Mitterrand, will be published by Michael Joseph at the end of March.