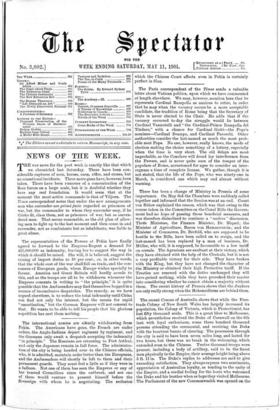 Page 1, 11 May 1901 — The representatives of the Powers at Pekin have finally agreed
Close

The representatives of the Powers at Pekin have finally agreed

to forward to the Empress-Regent a demand for 05,000,000 as indemnity, leaving her to suggest the way in which it should be raised. She will, it is believed, suggest the raising of import duties to 10 per cent., or, in other words, that the whole cost of the war shall fall on trade, and the con- sumers of European goods, whom Europe wishes specially to favour. America and Great Britain will hardly accede to this, and as the troops are all to be withdrawn whenever the Empress consents in writing to "the principle," it is quite possible that the Ambassadors may find themselves bogged in a morass of inconclusive despatches. The remedy, as we have argued elsewhere, is to reduce the total indemnity until China can find not only the interest, but the means for rapid "amortisation," but the German Emperor will not consent to that. He wants to be able to tell his people that his glorious expedition has cost them nothing.