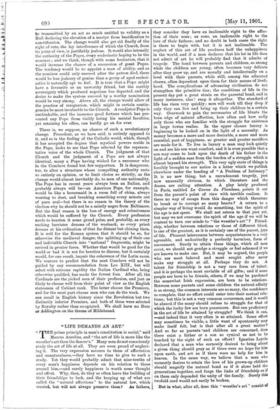 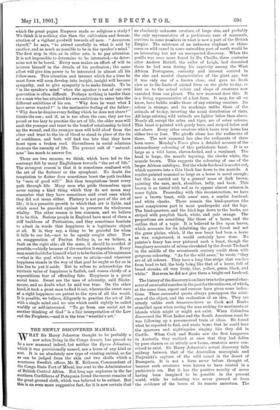 "T" prime principle in man's constitution is social," said Marcus Aurelius, and "the art of life is more like the wrestler's art than the dancer's" Many men do not consciously study the art of life at all. They are even proud of neglect- ing it. The very expression savours to them of affectation and unnaturalness,—they have no time to give to such a study. Yet they would probably admit that nine-tenths of every man's happiness depends on his relation to those around him,—and surely happiness is worth some thought and effort. Why, then, do they so often leave the building of their friendships to luck, and the keeping up of what are called the "natural affections" to the natural law, which created, but will not always preserve them F As fathers, they consider they have an inalienable right to the affec- tion of their sons ; as sons, an inalienable right to the love of their fathers; and no doubt in both cases the right is there to begin with, but it is not inalienable. The neglect of this art of life produces half the unhappiness in the world, and if a man declares that his lot in life does not admit of art he will probably find that it admits of tragedy. The bond between parents and children, so strong while the children are young, often becomes very delicate after they grow up, and are morally and intellectually on a level with their parents, while still, among the educated classes, often dependent upon them for their means of liveli- hood. The complications of advancing civilisation do not strengthen the primitive ties; the conditions of life in the present day put a great strain on the parental bond, and in many instances, alas ! snap it altogether. The standard of life has risen very quickly; men will work till they drop if only they can live and bring up their children in a certain way. Overwork to gain the necessaries of life blunts the keen edge of natural affection, how often and how sadly only those who are familiar with the struggle for existence in large towns realise. In the upper classes luxury is beginning to be looked on in the light of a necessity. As money becomes a more and more desirable, a more and more essential, part of happiness, so greater and greater sacrifices are made for it. To live in luxury a man may look quietly on and see his son want comfort, and it is even possible that a son may come to look upon the death of his father in the light of a sudden ease from the burden of a struggle which is almost beyond his strength. This very ugly state of things is forcibly brought to our notice in a letter which we publish elsewhere under the heading of "A Problem of Intimacy." It is no new thing, but a recrudescent tragedy, just now unusually obvious, to which literature and the drama are calling attention. A play lately produced in Paris, entitled La Course du Flambeau, points it out from the parent's point of view with terrible realism. Is there no way of escape from this danger which threatens to break or to corrupt so many hearts ? A return to a simpler way of living would do something, but the spirit of the age is not spent. We shall not return to that just yet, but may we not overcome the spirit of the age if we will be

content to tarn our minds to "the wrestler's art " ? Friend- ship, whether between relations or those of different blood,

of life. Pleasant intercourse between acquaintances is a very agreeable, and undoubtedly a perfectly harmless, form of amusement. Surely to attain these things, which all men covet, we should not grudge a struggle or feel ashamed if we are known to make one. But, it may be argued, the people who are most beloved and most sought after never make any struggle at all. Perhaps they do not. A talent for friendship is not a very rare form of talent, and it is perhaps the most enviable of all gifts ; and if some people are born to be friends, others, if we may be pardoned the somewhat Irish expression, are born to be relations.

Between some parents and some children the natural affinity is so strong, the common interests are so many, the confidence so complete, that no effort could enter into their mutual rela- tions; but this is not a very common occurrence, and it would be absurd if the many should refuse to struggle for that of which the lucky few are born possessors. But can proficiency

in the art of life be attained by struggle? We think it can, —and indeed that it very often is so attained. Some effort

may sometimes be visible, a little want of spontaneity may make itself felt, but is that after all a great matter ? And so far as parents .and children are concerned, does there exist a father or a son so cynical as not to be

touched by the sight of such an effort? Ignatius Loyola declared that a man who earnestly desired to bring about

a given thing should pray as if there were no hope for him upon earth, and act as if there were no help for him in heaven. In the same way, we believe that a man who earnestly desires to retain the love of his grown-up children should magnify the natural bond as if it alone held the generations together, and forge the links of friendship as if on them only depended the unity of the family. Surely this twofold cord would not easily be broken.

But in what, after all, does this "wrestler's art" consist of which the great pagan Emperor made so religious a study ? We think it is nothing else than the cultivation and demon- stration of a vigilant goodwill towards all men. "Accustom thyself," he says, "to attend carefully to what is said by another, and as much as possible to be in the speaker's mind." The first step in this, as in other arts, is to pay attention. It is not impossible to determine to be interested,—to deter- mine not to be bored. Every man makes an effort of will to interest himself in the details of his profession ; the same effort will give him power to be interested in almost all his fellow-men. This attention and interest which for a time he must force will soon develop into insight, insight will become sympathy, and to give sympathy is to make friends. To be "in the speaker's mind" when the speaker is not of our own generation is often difficult. Perhaps nothing is harder than for a man who has attained his ownambitions to enter into the different ambitions of his son. "Why does he want what I have never wanted ?" is the instinctive feeling of the father; "Why does he despise every feeling which he does not share?" thinks the son ; and if, as is too often the case, they are too proud or too lazy to practise the art of life, the older man will snub the younger and trust to the bond of relationship to bind up the wound, and the younger man will hold aloof from the other and trust to the tie of blood to stand in place of the tie of confidence, and both will find too late that they have leant upon a broken reed. Slovenliness in social relations destroys the amenity of life. The present cult of " natural- ness " has much to answer for.

There are two reasons, we think, which have led to the contempt felt by many Englishmen towards "the art of life." The strongest reason is that it is sometimes confused with the art of the flatterer or the sycophant. No doubt the temptation to flatter does sometimes beset the path trodden by "men of good will." But then temptations beset every path through life. Many men who pride themselves upon never saying a kind thing which they do not mean may remember that they have sometimes said cruel ones which they did not mean either. Flattery is not part of the art of life ; it is a parasitic growth to which.that art is liable, and which must be guarded against to preserve its wholesome vitality. The other reason is less common, and we believe it to be this. Serious people in England have most of them a stiff backbone of Puritanism, and they sometimes hesitate to admit in words that happiness is a legitimate object at all. It is, they say, a thing to be grateful for when it falls to our lot,—not to be openly sought after. Now an exaggeration of Puritan feeling is, as we believe, a fault on the right side; all the same, it should be avoided if possible,—chiefly because of the reaction it engenders. Every man must decide for himself what is to be the aim of his existence —what is the goal which he runs to attain—and wherever happiness stands in the way of that goal he ought so far as in him lies to put it aside. But to refuse to acknowledge the intrinsic value of happiness is foolish, and comes chiefly of a superstitious fear of offending fate. Happiness is a great moral tonic. Sweet are the uses of adversity, said Shake- speare, and no doubt what he said was true. On the other hand, it took a great man to find it out, whereas the sweet uses of a right happiness are patent to the eyes of all the world. It is possible, we believe, diligently to practise the art of life with a single mind and no aim which could rightly be called worldly or self-interested. "To go from one social act to another thinking of God" is a fair interpretation of the Law and the Prophets,—and it is the true "wrestler's art."