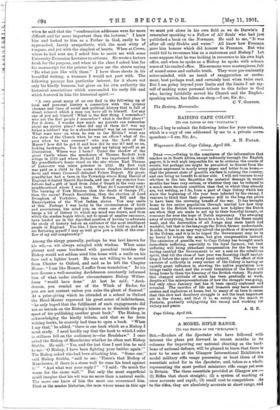 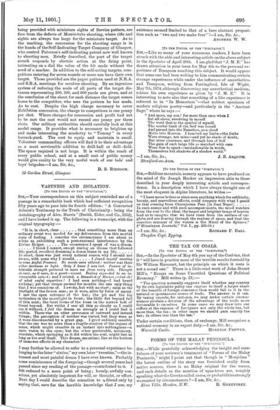 A MODEL RIFLE RANGE. rTo THE EDITOR OF THE "SPECTATOR."]

Srit,—Readers of the Spectator who have followed with interest the plans put forward in recent months in its columns for improving our national shooting as the back- bone of national defence, will be pleased to learn that there is now to be seen at the Glasgow International Exhibition a model military rifle range possessing at least three of the essentials asked for in the Spectator, and, taken as a whole, representing the most perfect miniature rifle range yet seen in Britain. The three essentials provided at Glasgow are

(1) Rifles that shoot straight; (2) a system of marking at once accurate and rapid; (3) small cost to competitors. As to the rifles, they are absolutely accurate at short range, and being provided with miniature sights of Service pattern, are free from the defects of Morris-tube shooting, where rifle and sights are always too large for the miniature target. As to the marking, the concession for the shooting range is in the hands of the Self-Indicating Target Company of Glasgow, who control Paterson's self-indicating patent now well known to shooting men. Briefly described, the part of the target struck responds by electric action at the firing point, intimating on a dial the value of the hit made without the need of a marker. In addition to the self-acting targets, com- petitors entering for seven rounds or more can have their own target. Those provided are the paper pattern used at N.R.A. and S.R.A. meetings for revolver shooting. By an ingenious system of reducing the scale of all parts of the target dis- tances representing 200, 500, and 600 yards are given, and at the conclusion of the shoot for each distance the target comes home to the competitor, who sees the pattern he has made. As to cost. Despite the high charge necessary to cover Exhibition concession, the charge to competitors is one penny per shot. Where charges for concession and prafi.t had not to be met the cost would not exceed one penny per three shots. Our military authorities should carefully look at this model range. It provides what is necessary to brighten up and make interesting the musketry to " Tommy " in every barrack-yard. The cost to equip and maintain is small. Volunteer commanding officers will find it to their advantage as a most serviceable addition to drill-hall or drill - field. The space required is not large. It is within the reach of every public school, and at a small cost of public money would give reality to the very useful work of our lads' and boys' brigades.—I am, Sir, &c.,