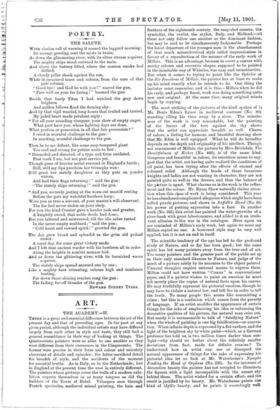 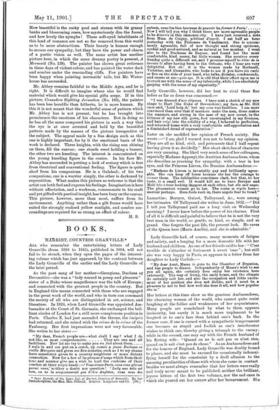 THERE is a great and essential difference between the art of the present day and that of preceding ages. In the past at any given period, although the individual artists may have differed largely from each other in style and taste, they still had a general resemblance in their way of looking at things. The Quattrocento painters were as alike to one another as they were different from their successors in the Cinquecento. The former were precise in their form and colour and minutely observant of details and episodes ; the latter sacrificed detail for breadth of style, and the accidents of the moment for essential truths. As in Italy, so in the Netherlands; bat in England at the present time the case is entirely different. The painters whose pictures cover the walls of a modern exhi- bition express themselves in as many tongues as did the builders of the Tower of Babel. Velasquez seen through French spectacles, medireval missal painting, the hats and

feathers of the eighteenth century, the snap-shot camera, the symbolist, the realist, the stylist, Italy, and Holland,—all these not only follow one another as the dominant fashion, but may be said to be simultaneously fashionable. Perhaps the latest departure of the younger men is the abandonment of that much misunderstood style called impressionism in favour of a reproduction of the manner of the early work of Millais. This is an advantage, because to cover a canvas with murky colours and eccentric shapes, supposed to be painted in the inimitable way of Whistler, was easy and uninstructive. But when it comes to trying to paint like the Ophelia or the Sir Isumbras of Millais, the painter has at least to make up his mind exactly what he intends to do. One thing the imitator must remember, and it is this,—Millais when he did his early, and perhaps finest, work was doing something quite new and original. At the same time, many original minds begin by copying.

The most striking of the pictures of the kind spoken of is Mr. Denis Eden's figure in medireval costume (No. 80) standing aling his time away by a river. The minute- ness of the work is very remarkable, but the painting of the leaves of the tree against the sky shows that the artist can appreciate breadth as well. Charm of colour, a feeling for humour, and beautiful drawing show that Mr. Eden is well equipped. What he will do hereafter depends on the depth and originality of his intellect. Though not reminiscent of Millais, the picture by Miss Brickdale, The Deceitfulness of Riches (No. 449), is of the same kind. Gorgeous and beautiful in colour, its execution seems to sug- gest that the artist, not having quite realised the conditions of oil paint, has been trying after the effects of enamel and coloured relief. Although the heads of these luxurious knights and ladies are not wanting in character, they are not painted quite so well as the dresses, and thus the balance of the picture is upset. What charms us in the work is the refine- ment and the colour." Mr. Byam Shaw naturally claims atten- tion when this class of work is being considered. This year he has abandoned complicated allegories which might have been called puzzle pictures, and shows in Suffolk's Hand (No. 60) his power of putting expression into a face. In another work (No. 241) this artist has painted the water-growths of a river-bank with great laboriousness, and added to it an irrele- vant allusion to the war in the catalogue. Here again we are reminded of Millais's early work, but again we must say Millais copied no one. A borrowed style may be very well applied, but it is not an end in itself.

The scientific tendency of the age has led to the profound study of Nature, and so far has been good ; but the same spirit has led many painters away from the true end of art. Too many painters and the greater part of the public set up as their only standard likeness to Nature, and judge of the merit of a picture solely by its nearness to the object painted. Unusual thoughts require unusual means to express them. Milton could not have written " Comas " in conversational prose, and if a painter wishes to paint an emotion he must not merely place the copies of natural facts upon his canvas. He may truthfully represent his pictorial emotion, though he may have to violate a natural law, and tell lies in order to tell the truth. To many people this seems like committing a crime; but this is a confusion which comes from the poverty of language. If an artist modifies the appearance of certain things for the sake of emphasising his idea or enhancing the decorative qualities of his picture, the natural man cries out. But surely it is unreasonable to talk of "falsifying Nature" when the whole of painting is one big falsification—or conven- tion. When infinite depth is expressed by a flat surface, and the light of the brightest sky by white paint—which, as a German professor has told us, is two million times darker than sun- light—why should we bother about the infinitely smaller deviations from fact, made for definite reasons ? To understand how an artist can use or disregard the natural appearance of things for the sake of expressing his pictorial idea let us look at Mr. Waterhouse's Nymphs Finding the Head of Orpheus (No. 231). In the interests of decorative beauty the painter has not scrupled to illuminate the figures. with a light incompatible with the sunset sky behind them. The artist wished for a certain effect, and the result is justified by its beauty. Mr. Waterhouse paints one kind of idyllic beauty, and he paints it exceedingly well. How beautiful is the rocky pool and stream with its grassy banks and blossoming roses, how mysteriously dim the forest, and how lovely the nymphs ! These soft-eyed inhabitants of this land of romance are not so far removed from this world as to be mere abstractions. Their beauty is human enough to arouse our sympathy, but they have the power and charm of a poetic vision as well. The same artist has another picture here, in which the same dreamy poetry is present, A Mermaid (No. 138). The painter has shown great reticence in these days of violent colour, and has painted the water dark and sombre under the resounding cliffs. Few painters have been happy when painting mermaids' tails, but Mr. Water- house has succeeded.

Mr. Abbey remains faithful to the Middle Ages, and he is right. It is difficult to imagine where else he would find material which would give his special gifts scope. If in this picture, Crusaders Sighting JerusaZem (No. 163), the painter has been less heraldic than hitherto, he is more human. By this it is not meant that the wonderful sense of pattern which Mr. Abbey has is not present, but he has brought into prominence the emotions of his characters. But in doing so he has all the same composed his picture in such a way that the eye is at once arrested and held by the beautiful pattern made by the masses of the picture irrespective of the subject. The appeal made by a fine design such as this one is highly important, for by it the emotional basis of the work is declared. Three knights, with the rising sun shining on them, fill the canvas ; one stands erect holding a banner, the other two are kneeling. The interest is concentrated on the young kneeling figure in the centre. In his face Mr. Abbey has succeeded in putting a look of ecstasy which is free from theatrical and conventional feeling. The figure is quite aloof from his companions. He is a Galahad; of his two companions, one is a warrior simply, the other is darkened by superstition. What makes this picture so welcome is that the artist can both feel and express his feelings. Imagination is here without affectation, and a workman, consummate in his craft and yet giftedwith poetical insight, has been busy on the canvas. This picture, however, more than most, suffers from its environment. Anything rather than a gilt frame would have suited the strongly realised yellow sunlight, and sombre sur- roundings are required for so strong an effect of colour.