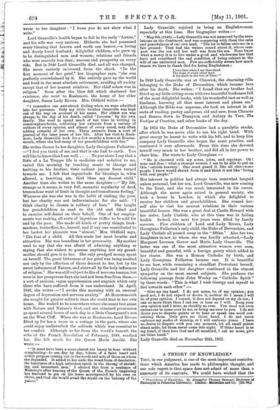 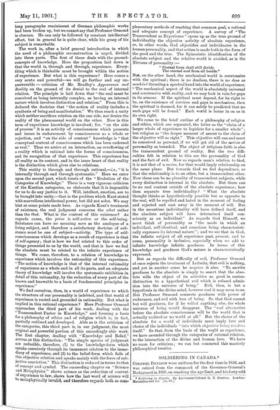 A THEORY OF KNOWLEDGE.* THIS, in our judgment, is one

of the most important contribu- tions which America has made to philosophic thought, and our, sole regret is that space does not admit of more than a summary of its contents. We could have wished that the

long paragraphs reminiscent of German philosophic works had been broken up, but we cannot say that Professor Ormond is obscure. He can only be followed by constant intellectual effort, but in general he is quite clear, while his grasp of his subject is remarkable.

The work is, after a brief general introduction. in which the need of a philosophic reconstruction is urged, divided into three parts. The first of these deals with the ground- concepts of knowledge. Here the proposition laid down is that the world is, through and through, experience. Every- thing which is thinkable must be brought within the notion of experience. But what is this experience ? Here comes a very acute and powerful—we will go further and say un- answerable — criticism of Mr. Bradley's Appearance and Reality on the ground of its denial to the real of internal relation. The principle is laid down that "the real must be conceived as being internally complex, as having an internal nature which involves distinction and relation." From this is deduced the doctrine that "the notion of reality includes a synthesis of being and manifestation." We thus reach a unity which neither sacrifices relation on the one side, nor denies the reality of the phenomenal world on the other. Now in. this term of experience knowledge is involved ; for, "on the side of process" it is an activity of consciousness which presents and issues in endorsement by consciousness as a whole or rejection, and "on the aide of content" knowledge is "that conceptual content of consciousness which has been endorsed as real." Thus we arrive at an interaction, an overflowing of a reality which is rational into the forms of consciousness, and its recognition of that experience. This experience has all reality as its content, and in the inner heart of that reality is the distinction which gives rise to relations.

This reality is through and through "it is internally through and through systematic." Here we enter upon the second part, which treats of the "Evolution of the Categories of Knowledge." There is a very vigorous criticism of the Ka,ntian categories, so elaborate that it is impossible for us to do any justice to it. Will, intellect, emotion, are to be brought into unity,—that is the problem which Kant stated with marvellous intellectual power, but did not solve. We may hint at some points made here. As regards Kant's treatment of existence, the real judgment concerns the what rather than the that. What is the content of this existence ? As regards cause, the prius is self-active or the self-being. Substance can have no meaning save as the analogue of a living subject, and therefore a. satisfactory doctrine of sub- stance must be one of subject—activity. The type of self- consciousness which develops as a result of experience is that of self-agency; that is how we feel related to this order of things presented to us by the world, and that is how we feel the absolute must be related to the infinite experience of things. We come, therefore, to a relation of knowledge to experience which involves the rationality of this experience. "The notion of knowledge is that of the internal rationality of experience as a whole and in all its parts, and an adequate theory of knowledge will involve the systematic exhibition in detail of this rationality, by the reduction of every part of the known and knowable to a basis of fundamental principles in experience."

We find ourselves, then, in a world of experience to which the structure of our personality is indebted, and that world of experience is rooted and grounded in rationality. But what is implied in this rational experience ? Here Professor Ormond approaches the third part of his work, dealing with the " Transcendent Factor in Knowledge," and forming a basis

for a philosophy of ethics and of religion which is, in fact, partially outlined and developed. Able as is the criticism of the categories, this third part is, in our judgment, the most original and powerful portion of this exceedingly able work. The first chapter, dealing with "Knowledge and Belief," arrives at this distinction : "The simple species of judgment are reducible, therefore, (I) to the knowledge-form which speaks coercively through its immanent relation to the imme- diacy of experience, and (2) to the belief-form which fails of this objective relation and speaks mainly with the force of sub- pctive conviction." This distinction is reduced in terms to that of concept and symbol. The succeeding chapter on "Science and Metaphysics" shows science as the reduction of content of experience to law, shows how the last word of science will be metaphysically invalid, and therefore regards both as coin. plementary methods of reaching that common goal, a rational and adequate concept of experience. A survey of "The Transcendent as Experience" opens up as the true ground of individuality the objective activity of absolute experience, or, in other words, God objectifies and individuates in the human personality, and that action is made both in. the form of the good and the true. The Spinozistic identification of the absolute subject and the relative world is avoided, as is the Nirvana of personality :—

" Eternal form shall still divide The eternal soul from all beside."

But, on the other hand, the niechanical world is coextensive with the spiritual ; there is no dualism, there is no dens ex rnachina' thrusting a spectral hand into the world of experience. "The mechanical aspect of the world is absolutely universal and coextensive with reality, and we may look in vain for gaps in its armour. If the spiritual must depend, for its right to be, on the existence of crevices and gaps in mechanism, then the spiritual is doomed, for it can safely be predicted that no such gaps will be found." Each world is borne in on us in its own right.

We come to the brief outline of a philosophy of religion

and ethics, which are separated, the latter as the "claim of a larger whole of experience to legislate for a smaller whole " ; but religion as "the deeper moment of assent to the claim of the objective will as right." This objective will can and must be conceived as personal, if we will get rid of the notion of personality as bounded. The object of religions faith is also the transcendent ground of reality. But the two diffi- culties felt in relation to this are the personality of God and the fact of evil. Now as regards man's relation to God, it is not that of a socius, for that would imply relationship on the same plane. But towards G od we feel dependence, so that the relationship is to an other, but a transcendent other. Now there can be no plurality of transcendent subjects, while every distinction is internal in the absolute. But there can be no real content outside of the absolute experience; how then separate true individuality ? "What the absolute thought thinks as hypothetically possible but as opposite to the real, will be repelled and hated in the moment of feeling and rejected and cast away in the moment of will. But in the meantime individuality will have defined itself, and the absolute subject will have determined itself con- sciously as an individual." As regards God Himself, we must think of personality as "the mode in which an individnal, self-identical, and conscious being characteristi- cally expresses its internal nature " ; and we see that in God, the infinite subject of all experience past, present, and to come, personality is inclusive, especially when we add to infinite knowledge infinite goodness. In terms of this knowledge and goodness God's nature is characteristically expressed.

But as regards the difficulty of evil, Professor Ormond

at once rejects the treatment of Leibnitz, that evil is nothing, and yet in another sense be negates it also. "To ascribe goodness to the absolute is simply to assert that the abso- lute wills the object of its activities as good in contra- distinction to a hypothetical evil which is refused admis- sion into the universe of being." Evil, then, is but a hypothesis in the divine mind, however real it may seem to us. But Professor Ormond connects goodness with power of endurance, and evil with loss of being. So that God cannot but will goodness, for if he willed anything else, the whole universe of being would disappear. The "real alternative before the absolute consciousness will be the world that is actually realised or no world at all." But the choice of the absolute for a world of individuals must imply love and choice of the individuals "into which objective being resolves itself." So that, from the basis of the wovld as experience, we have ascended through the categories of rational relation, to the interaction of the divine and human love. We have no room for criticism ; we can but commend this masterly philosophical treatise.