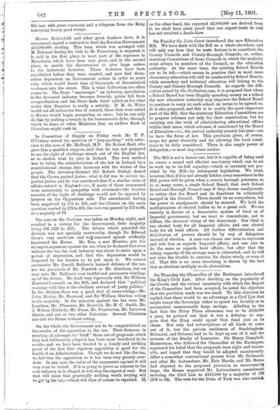 Messrs. Rothschild and other great bankers have, it is announced,

signed a contract to lend the Russian Government £16,000,000 sterling. This loan, which was arranged with M. Deleasse during his visit to St. Petersburg, is required, it is said, in the first place, to meet part of the expenses in Manchuria, which have been very great, and, in the second place, to enable the Government to give large orders to the industrial factories. These factories have been established before they were wanted, and now find them- selves dependent on Government orders in order to avert ruin, which would throw tens of thousands of discontented workmen into the street. This is what Colbertism too often comes to. The State " encourages " an industry, speculation in the favoured industry becomes feverish, prices fall from overproduction, and the State finds itself called on for what under thin disguises is really a subsidy. If M. de Witte would set all industries free of control, those that were suited to Russia would begin prospering at once ; but he can only do this by making a breach in the bureaucratic dyke, through which he fears, or other Ministers fear, an endless flood of liberalism might rush in.