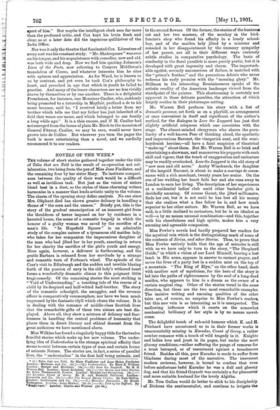 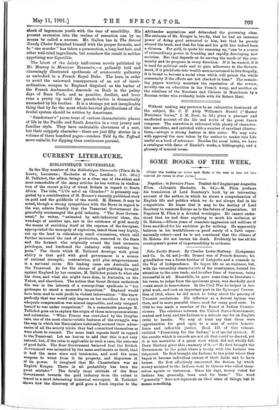 THE volume of short stories gathered together under the title of Tales that are Told is the result of co-operation not col- laboration, two being from the pen of Miss Jane Findlater, and the remaining four by her sister Mary. To institute compari. sons between the quality of their work would be a difficult as well as invidious task. But just as the voices of sisters blend best in a duet, so the styles of these charming writers harmonise in a manner that lends artistic unity to the volume. The charm of the opening story defies analysis. No one since Mrs. Oliphant died has shown greater delicacy in handling a theme of "the seen and the unseen." Briefly put, this is the story of the gradual emancipation of an innocent girl from the thraldrom of terror imposed on her by residence in a haunted house, the scene of a romantic tragedy in which the honour of a guilty woman was saved by the sacrifice of a man's life. "In Hopefield Square" is an admirable study of the complex nature of a tyrannous old maiden lady, who takes for her companion the impecunious daughter of the man who had jilted her in her youth, exacting in return for her charity the sacrifice of the girl's youth and energy. Here again, however, a deliverer is forthcoming, and the gentle Barbara is released from her servitude by a strange and romantic turn of Fortune's wheel. The episode of the Czar's visit to Edinburgh and the sadden and terrible blazing forth of the passion of envy in the old lady's withered heart forms a wonderfully dramatic climax to this poignant little tragi-comedy. Of the remaining stories the most striking is "Void of Understanding," a touching tale of the rescue of a child by its despised and half-witted half-brother. The story of the romantic schoolgirl, the smuggler, and the revenue officer is comparatively commonplace, nor have we been much impressed by the fantastic idyll which dotes the volume. It is in dealing with the romance of middle-class Scottish lives that the remarkable gifts of these two sisters are best dis- played. Above all, they show a mixture of delicacy and fear- lessness in handling the central problems of humanity that places them in direct literary and ethical descent from the great authoress we have mentioned above.

Miss Wilkins has found a singularly happy title for the twelve fanciful stories which make up her new volume. The under- lying idea of Understudies is the strange spiritual affinity that seems to exist between certain types of man and certain forms of animate Nature. The stories are, in fact, a series of parallel lives, the " understudies " in the first half being animals, and

in the second flowers. Of the former, the stories of the huntress cat and her two masters, of the monkey in the bird- fancier's shop who found his affinity in a lonely school- boy, and of the maiden lady jilted by a minister and consoled in her disappointment by the unoanny sympathy of her parrot, are all in their different ways curiously subtle studies in comparative psychology. The basis of similarity in the floral parallels is more purely poetic, but it is developed with great ingenuity and charm. The imperturb- able egotist, serenely unconscious of failure, is matched with the "prince's feather," and the precocious Adonis who never redeems his early promise with the "morning glory." Mr.

Stillman in his interesting Reminiscences speaks of the artistic crudity of the American landscape viewed from the standpoint of the painter. This shortcoming is certainly not apparent in these delicate parables, the attraction of which largely resides in their picturesque setting.

Mr. Warren Bell prefaces his story with a list of dramatis personx, set forth as on a playbill, an arrangement at once convenient in itself and significant of the author's method, for the dialogue in Love the Laggard has just that slightly artificial crispness which one associates with the stage. The absent-minded clergyman who shares the pecu- liarity of a well-known Peer of thinking aloud, the apathetic and impecunious Baronet, the vinegarish aunt, and the semi- hoydenish heroine,—all have a faint suspicion of theatrical " make-up " about them. But Mr. Warren Bell is so brisk and entertaining a showman, and manceuvres his puppets with such skill and vigour, that the touch of exaggeration and caricature may be readily overlooked. Love the Laggard is the old story of "new men and old acres." Araby Winchurch, the daughter of the languid Baronet, is about to make a mariage de cowl's- nance with a rich merchant, twenty years her senior. On the eve of her wedding her heart fails her and she runs away to London to earn her living. The description of her experiences at a residential ladies' club amid other bachelor girls is decidedly amusing. Of course Gaunt, the jilted millionaire, finds her out, but it is not until he has lost all his money that she realises what a fine fellow he is, and how much superior to her other suitors. Mr. Warren Bell, as we have said, is a little inclined to caricature, but he is an idealist as well—a by no means unusual combination—and this, together with his cheerfulness and high spirits, makes him a very amusing and agreeable companion.

Miss Fowler's novels had hardly prepared her readers for the mystical vein which is the distinguishing mark of some of the contents of Sirius, and other Stories. Thus, to prove that Miss Fowler entirely holds that the age of miracles is still with us we have only to turn to the story, "The Shepherd Guide," in which a vision of our Lord Himself, bearing a lost lamb in His arms, appears in answer to earnest prayer, and saves the lives of a party lost in a sudden mist on the top of a mountain. "The Ring of Elyn," on the other hand, deals with another sort of mysticism, for the hero of the story is led into the paths of righteousness by the soul of a long-dead

maiden, who appears to him in a dream as the owner of a

certain magical ring. Other of the stories trend in the same direction, but these are the two most remarkable examples.

The incisive writing and amusing qualities of the other tales are, of course, no surprise to Miss Fowler's readers, but this new vein is as interesting as it is unexpected. The mellowing influence which it exerts on the somewhat mechanical brilliancy of her style is by no means unwel- come.

The delightful touch of sub-acid humour which K. and H. Prichard have accustomed us to in their former works is unaccountably missing in Karadae, Count of Gerzy, a rather

sombre romance with a touch of wild tragedy in it. Knights and ladies love and joust in its pages, but under the most gloomy conditions,—either suffering the pangs of remorse for a trust betrayed, or of resentment against a treacherous friend. Besides all this, poor Karadac is made to suffer from blindness during most of the narrative. The irreverent modern reviewer, however, is bound to confess that even before misfortune betel Karadae he was a dull and gloomy dog, and that his friend Goyault was certainly a far pleasanter and more suitable husband for the lovely Algitha.

Mr. Torn Gallon would do better to stick to his discipleship of Dickens the sentimentalist, and continue to irrigate the cheek of ingenuous youth with the tear of sensibility. His present excursion into the realms of sensation can by no means be called a success. Mr. Gallon has in The Second Dandy Chafer furnished himself with the proper formula, and to "one murder" has taken a personation, a long-lost heir, and other well-tried ingredients, but somehow the result is neither appetising nor digestible.

The latest of the dainty half-crown novels published by Mr. Murray is Monsieur Beaucaire,—a gallantly told and charmingly illustrated apotheosis of aristocratic gallantly as embodied in a French Royal Duke. The hero, in order to avoid the untoward consequences of an act of insub- ordination, escapes to England disguised as the barber of the French Ambassador, descends on Bath in the palmy days of Beau Nash, and as gambler, duellist, and lover runs a pretty rig until the pseudo-barber is dramatically unmasked by his brother. It is a strange yet not inexplicable thing that by far the most whole-hearted glorifications of the feudal system should be written by Americans.

" Sundowner's" yarns treat of various characteristic phases of life in the Pacific and South America in a very jaunty and familiar style. They have undeniable cleverness of a sort, but their snippety character — there are just fifty stories in a volume of three hundred pages—renders Told by the Taffrail more suitable for dipping than continuous perusal.