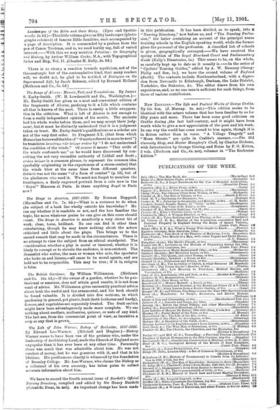 The Songs of Alcants : Memoir, Text, and Translations. By

James S. Easby-Smith. (W. H. Lowdermilk and Co., Washington.)— Mr. Easby-Smith has given us a neat and convenient edition of the fragments of Alcreus, prefixing to it a Life which contains all that is known of the poet. There is surely a little exaggera- tion in the criticism. What is left of Alemus is not enough to form a really independent opinion of his merits. The ancients had his whole works before them, and we may accept their judg- ment, but it must be distinctly understood that it is a judgment taken on trust. Mr. Easby-Smith's qualifications as &scholar are not of the very first order. In Fragment XX. (that from which Horace has borrowed the idea of " 0 Davis referent in mare to novi ") be translates acrepl7rma 'rap Wimp rerdatv by "I do not understand the condition of the winds." Of course it means "This strife of the winds confounds me," as he would have discovered by con- sulting the not very recondite authority of Liddell and Scott ; (prcitris 1171414'Y is a common phrase, to represent the common idea (probably originating in the experiences of a storm-centre) that the winds blew at the same time from different quarters. Retiarii was not the name "of a form of combat" (p. 13), but of the gladiators who used it. We must not forget to mention the frontispiece, a finely engraved portrait from a coin now in the "Royal" Museum at Paris. Is there anything Royal in Paris now ?