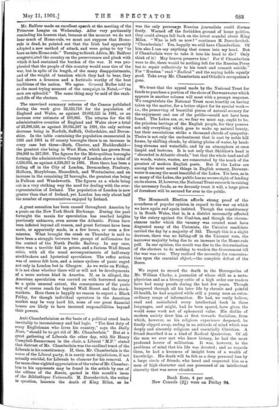 Page 3, 11 May 1901 — A great sensation has been caused throughout America by a
Close

A great sensation has been caused throughout America by a

panic on the New York Stock Exchange. During the past fortnight the mania for speculation has reached heights previously unknown, even across the Atlantic. Prices have been inflated beyond all reason, and great fortunes have been made, or apparently made, in a few hours, or even a few minutes. What brought the crash on Thursday is said to have been a straggle between two groups of millionaires for the control of the North Pacific Railway. In any case, there was a terrible fall in prices, and a furious Wall Street crisis, with all the usual accompaniments of half-crazy stockbrokers and hysterical speculators. The reflex action was of course felt here, and a minor cyclone of panic raged not only in London but in Glasgow. As we write on Friday, it is not clear whether there will or will not be developments of a more serious kind in America. If, as is alleged, the American speculation was carried on with borrowed money to a quite unusual extent, the consequences of the panic may of course reach far beyond Wall Street and the stock- markets. Here there is happily no reason to expect a Black Friday, for though individual operators in the American market may be very hard hit, none of our great financial houses are likely to have incurred responsibilities beyond their powers.