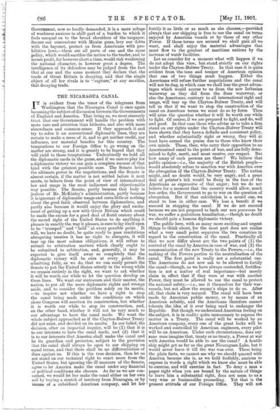 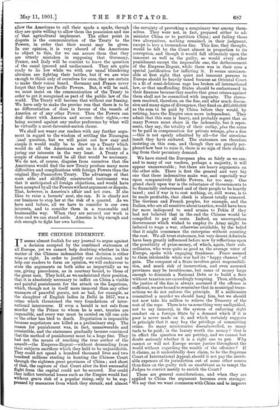 IT is evident from the tenor of the telegrams from Washington that the Nicaragua Canal is once again becoming the subject of discussion between the Governments of England and America. That being so, we most sincerely trust that our Government will handle the problem with more care and attention than hitherto, and also with more shrewdness and common-sense. If they approach it and try to solve it on conventional diplomatic lines, they are certain to make a mess of it, and to get neither credit, nor influence, nor material benefits for this country. The temptations to our Foreign Office to go wrong on the matter are strong, and it is greatly to be feared that they will yield to those temptations. ' Undoubtedly we hold all the diplomatic cards in the game, and if we care to play for a diplomatic victory we can gain a complete success of that kind with the greatest possible ease. The Senate holds the ultimate power in the negotiations, and the Senate is almost certain, if the matter is not settled before it next meets, to behave from the point of view of international law and usage in the most indiscreet and objectionable way possible. The Senate, partly because that body is jealous of Mr. McKinley's administration, partly because it is ignorant of diplomatic usage and cares little or nothing about the good faith observed between diplomatists, and partly also because it would enjoy the glory and excite- ment of getting up a row with Great Britain which could be made the excuse for a good deal of florid oratory about the sacred right of the United States to do anything it pleases in exactly the way it pleases, is sure to lay itself open to be " trumped " and " held " at every possible point. It will, we have no doubt, be quite ready to pass resolutions abrogating treaties it has no right to abrogate, it will tear up the most solemn obligations, it will refuse to submit to arbitration matters which clearly ought to be submitted to arbitration, and, generally, it may be expected to give itself away so completely that the diplomatic victory will be ours at every point. But admitting fully, as we do, that we can easily permit the Senate to put the United States utterly in the wrong while we remain entirely in the right, we want to ask whether it will be worth our while to let the question develop on these lines. We want our statesmen and their master, the nation, to put all the mere diplomatic rights and wrongs aside, and to consider the problem solely on its merits, —to inquire not whether we have a right to stop the canal being made under the conditions on which alone Congress will sanction its construction, but whether it is worth our while to stop its construction, and, on the other hand, whether it will not be very much to our advantage to have the canal made. We want the whole subject approached as if the Clayton-Bulwer Treaty did not exist, and decided on its merits. • In our belief, the decision, after an impartial inquiry, will be (1) that it is to our interests to have the canal made, and (2) that it is to our interests that America shall make the en nal and be its guardian and protector, subject to the provision that the canal shall always be open to our shipping on equal terms, and that there shall be no differentiation of dues against us. If this is the true decision, then let us not stand on our technical right to exact more from the United States, but ignoring the ill manners of the Senate, agree to let America make the • canal under any financial or political conditions she chooses. As far as we are con- cerned, we would let her make the canal either on her own soil by buying a stretch of territory from Nicaragua, or by means of a subsidised American company, and let her fortify it as little or as much as she chooses,—provided always that our shipping is free to use the canal on terms enjoyed by American vessels or by those of any other Power. If those terms are secured we shall gain all we want, and shall enjoy the material advantages that must flow to the greatest of maritime nations by the increase of watAir facilities.

Let us consider for a moment what will happen if we do not adopt this view, but stand strictly on our rights under the Clayton-Bulwer Treaty. In that case it is quite evident from the tone and temper of American opinion that one of two things must happen. Either the Americans will refuse further negotiations and the canal will not be dug, in which case we shall lose the great advan- tages which would accrue to us from the new Isthmian waterway as they did from the Suez waterway, or else the Americans, contrary to all international right and usage, will tear up the Clayton-Bulwer Treaty, and will tell us that if we want to stop the construction of the canal on American terms we must do so by force. Then will arise the question whether it will be worth our while to fight. Of course, if we are prepared to fight, and do, well and good. In that case those who advise us to take a firm stand on our rights under the Clayton-Bulwer Treaty will have shown that they have a definite and consistent policy, and whether substantially right or wrong, they will at least have earned the praise due to those who know their own minds. Those, then, who carry their opposition to an Americanised canal to the point of war, and are fully deter- mined to fight, merit, and must receive, our respect. But how many of such persons are there ? We believe that public opinion—i.e., the majority of the British people— would absolutely refuse to sanction war with America over the abrogation of the Clayton-Bulwer Treaty. The nation might, and no doubt would, be very angry, and a great deal of printer's ink would be flung in the face of the Americans as expressive of that anger; but we do not believe for a moment that the country would allow, much less order, the Government to go to war on the question of abrogation. But if that calculation is a sound one, we stand to lose in either case. We lose a benefit if we succeed in stopping the canal. If we do not succeed because we are not prepared to back our non possumus by war, we suffer a gratuitous humiliation,—though no doubt we should gain a famous diplomatic victory.

The public here, with so many more exciting and urgent things to think about, for the most part does not realise what a very small point separates the two countries in regard to the construction of the canal. Practically all that we now differ about are the two points of (1) the control of the canal by America in case of war, and (2) the communication of the new Treaty to the Powers,—i.e., the making of the Powers parties to the neutralisation of the canal. The first point is really not a substantial one. The Americans do not now ask to be allowed to fortify the canal—though, as we have always contended, fortifica- tion • is not a matter of real importance—but merely claim in effect that if they were at war with another Power, they must be allowed to use the canal to protect the national safety use it themselves for then' war- vessels, but not allow the enemy's ships to do so. After all, that claim is very natural. The canal will have been made by American public money, or by means of an American subsidy, and the Americans therefore cannot tolerate the idea of it ever being used to endanger the Republic. But though we understand American feeling on the subject, it is in reality quite unnecessary to express the matter in a Treaty. The canal will be worked by an American company, every one of the great locks will be worked and controlled by American engineers, every pilot will be an American. Under such circumstances, does any sane man imagine that, treaty or no treaty, a Power at war with America would be able to use the canal? A hostile ship might get as far as the great Nicaraguan Lake, but it would never leave it till the war was over. These being the plain facts, we cannot see why we should quarrel with America because she is, as we hold foolishly, anxious to express in words a right which we know she must be able to exercise, and will exercise in fact. To deny a man a paper right when you are bound by the nature of things to leave him a substantial right, does not seem to us a very wise or businesslike proceeding. Yet that is the present attitude of our Foreign Office. They will not allow the Americans to call their spade a spade, though they are quite willing to allow them the possession and use of that agricultural implement. The other point in dispute is the communication of the Treaty to the Powers, in order that their assent may be given. In our opinion, it is very absurd of the Americans to object to this, for we can assure them that they are utterly mistaken in supposing that Germany, France, and Italy will be content to leave the question of the canal ignored and undiseussed. They are quite ready to lie low while we with our usual blundering altruism are fighting their battles, but if we are wise enough to think only of ourselves for once, they are certain to make their voices heard. Germany and France never forget that they are Pacific Powers. But, it will be said, we must insist on the communication of the Treaty in order to get it recognised as part of the public law of the world. The Treaty will become that without our fussing. We have only to make the proviso run that there is to be no differentiation of dues in favour of the vessels of America, or of any other Power. Then the Powers can deal direct with America and secure their rights,—we being secured against any undue preference by what will be virtually a most-favoured-nation clause.

We shall not weary our readers with any further argu- ment in regard to the wisdom of settling the Nicaragua Ja,nal question, but we will point out how easy and simple it would really be to draw up a Treaty which would do all the Americans ask us to do without in- juring our interests in the very least. A Treaty of a couple of clauses would be all that would be necessary. We do not, of course, disguise from ourselves that the Americans would find the new Treaty produce many more difficulties and complications with foreign Powers than the original Hay-Pauncefote Treaty. The advantage of that most able and skilfully constructed instrument was that it anticipated all foreign objections, and would have been accepted by all the Powers without argument or dispute. That, however, is America's affair and not ours. If she likes to raise a hornets' nest, she can. It is clearly not our business to stop her at the risk of a quarrel. As we have said before, all we have to consider is our own interests, and to consider them in a reasonable and businesslike way. When they are secured our work is done and we can stand aside. America is big enough and rich enough to fight her own battles.