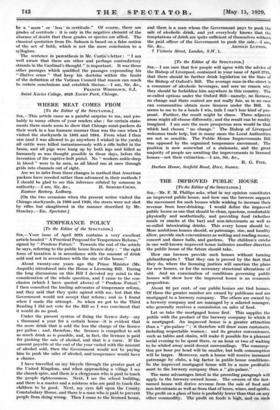 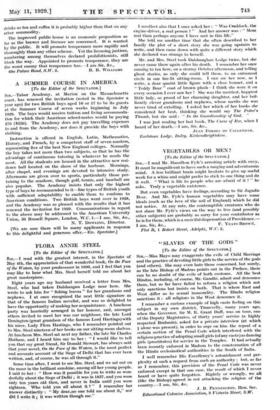 SIR,—Mr. F. M. Phillips asks, what in my opinion constitutes an improved public house, and how can the brewers support the movement for such houses while wishing to increase their revenue from beer-drinking. I would define the improved public house as one that should be clean, spacious, comfortable physically and aesthetically, and providing food (whether meals or snacks at the bar) and non-intoxicants as well as so-called intoxicating drinks. This every house should be. More ambitious houses should, as patronage, size, and locality allow, provide such conveniences as writing and reading rooms, concert and dance halls, and gardens. The children's creche in one well-known improved house indicates another direction the public house of the future should take.

How can brewers provide such houses without turning philanthropists ? That they can is proved by the fact that they do, where the licensing justices will sanction the plans for new houses, or for the necessary structural alterations of old. And an examination of conditions governing public houses will show how the improved house is an economic proposition.

Let us take the mortgaged house first. This supplies the public with the product of the brewery company to which it is mortgaged. An improved house is a greater attraction than a " gin-palace " ; it therefore will draw more customers; including respectable women ; and its greater conveniences, such as tables and chairs, will make it possible for a pleasant social evening to be spent there, or an hour or two of waiting to be whiled away amid decent surroundings. The consump- tion per hour per head will be smaller, but bulk consumption will be larger. Moreover, such a house will receive increased patronage by clubs, a big factor in public house conditions. So the improved, mortgaged house will be a more profitable asset to the brewery company than a " gin-palace."

The same advantages listed in the preceding paragraph will apply to the brewery-owned house. The owners of the last- named house will derive revenue from the sale of food and non-intoxicants as well as from that of beers, wines, and spirits. The profit on a glass of beer is probably lower than that on any other commodity. The profit on foods is high, and on such drinks as tea and coffee it is probably higher than that on any other commodity.

The improved public house is an economic proposition as far as the brewer and licensee are concerned. It is wanted by the public. It will promote temperance more rapidly and thoroughly than any other scheme. Yet the licensing justices, numbering among themselves declared prohibitionists, still block the way. Appointed to promote temperance, they are the worst enemy that temperance has.—I am Sir, &c.,