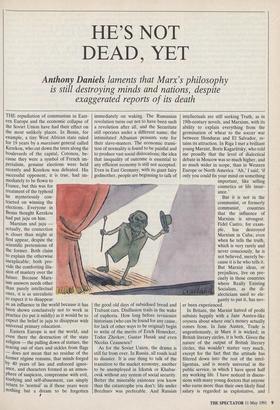 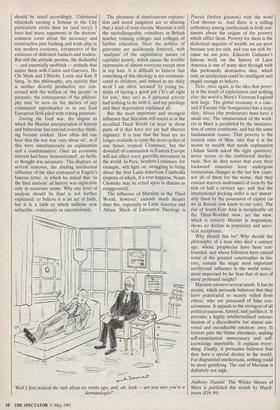 HE'S NOT DEAD, YET

is still destroying minds and nations, despite exaggerated reports of its death

THE repudiation of communism in East- ern Europe and the economic collapse of the Soviet Union have had their effect on the most unlikely places. In Benin, for example, a tiny West African state ruled for 19 years by a marxisant general called Kerekou, who cut down the trees along the boulevards of the capital, Cotonou, be- cause they were a symbol of French im- perialisin, genuine elections were held recently and Kerekou was defeated. His successful opponent, it is true, had im- mediately to be flown to France, but this was for treatment of the typhoid he mysteriously con- tracted on winning the elections. Everyone in Benin thought Kerekou had put juju on him.

Eastern Europe is not the world, and even there the destruction of the state religion — the pulling down of statues, the tearing out of stars and sickles from flags — does not mean that no residue of the former regime remains, that minds forged by 40 years of lies and enforced ignor- ance, and characters formed in an atmos- phere of suspicion, compromise with evil, toadying and self-abasement, can simply return to 'normal' as if those years were nothing but a dream to be forgotten immediately on waking. The Rumanian revolution turns out not to have been such a revolution after all, and the Securitate still operates under a different name; the intimidated Albanian peasants vote for their slave-masters. The economic transi- tion of normality is found to be painful and to produce vast social dislocations; the idea that inequality of outcome is essential to any efficient economy is still not accepted. Even in East Germany, with its giant fairy godmother, people are beginning to talk of the good old days of subsidised bread and Trabant cars. Disillusion trails in the wake of euphoria. How long before revisionist historians (who can be found for any cause, for lack of other ways to be original) begin to write of the merits of Erich Honecker, Todor Zhivkov, Gustav Husak and even Nicolas Ceausescu?

As for the Soviet Union, the drama is still far from over. In Russia, all roads lead to disaster. It is one thing to talk of the transition to the market economy, another to be unemployed in Irkutsk or Khabar- ovsk without any system of social security. Better the miserable existence you know than the catastrophe you don't: life under Brezhnev was preferable. And Russian intellectuals are still seeking Truth, as in 19th-century novels, and Marxism, with its ability to explain everything from the germination of wheat to the soccer war between Honduras and El Salvador, re- tains its attraction. In Riga I met a brilliant young Marxist, Boris Kagarlitsky, who told me proudly that the level of dialectical debate in Moscow was so much higher, and so much wider in scope, than in Western Europe or North America. `Ah,' I said, 'if only you could fix your mind on something important, like selling cosmetics or life insur- ance.'

But it is not in the communist, or formerly communist, countries that the influence of Marxism is strongest. Fidel Castro, for exam- ple, has destroyed Marxism in Cuba; even when he tells the truth, which is very rarely and never consciously, he is not believed, merely be- cause it is he who tells it. But Marxist ideas, or prejudices, live on pre- cisely in those countries where Really Existing Socialism, as the di- alecticians used so ele- gantly to put it, has nev- er been experienced.

In Britain, the Marxist hatred of profit subsists happily with a Jane Austen-like coyness about where one's money actually comes from. In Jane Austen, Trade is ungentlemanly, in Marx it is wicked; in British literary circles, it is both. Given the nature of the output of British literary circles, this wouldn't matter very much, except for the fact that the attitude has filtered down into the rest of the intel- ligentsia, and is nearly universal in the public service, in which I have spent half my working life. I have noticed in discus- sions with many young doctors that anyone who earns more than their own likely final salary is regarded as exploitative, and should be taxed accordingly. Unlettered whizzkids earning a fortune in the City particularly excite their ire (and envy); I have had many arguments in the doctors' common room about the necessary and constructive part banking and trade play in any modern economy, irrespective of the existence of dishonest bankers and traders. But still the attitude persists, the disdainful — and essentially snobbish — attitude that unites them with Castro and Guevara, Ho Chi Minh and Ulbricht, Lenin and Kim II Sung. In this philosophy, any activity that is neither directly productive nor con- cerned with the welfare of 'the people' is parasitic; the consequence of the philoso- phy may be seen on the shelves of any communist supermarket or in any East European field piled with rotting potatoes.

During the Gulf war, the degree to which the Marxist interpretation of history and behaviour has entered everyday think- ing became evident. How often did one hear that the war was 'only about oil', as if this were simultaneously an explanation and a condemnation. Once an economic interest had been 'demonstrated', no furth- er thought was necessary. This displays, at several removes, the abiding intellectual influence of the idea contained in Engels's famous letter, in which he stated that 'in the final analysis' all history was explicable only in economic terms. Why any level of analysis should be final is not further explained: to believe it is an act of faith, but it is a faith to which millions now subscribe, consciously or unconsciously. The pleasures of simultaneous explana- tion and moral judgment are so alluring that a kind of semi-literate Marxism is still the unchallengeable orthodoxy in British teacher training colleges and colleges of further education. Here the politics of grievance are assiduously fostered, with 'analyses' of the exploitative nature of capitalist society, which causes the terrible oppression of almost everyone except men in top hats. It is difficult to believe that something of this ideology is not communi- cated to children, and indeed in my daily work I am often 'accused' by young pa- tients of having a good job ('It's all right for you,' they say) as if personal activity had nothing to do with it, and my privilege and their deprivation explained all.

But the most important and strongest influence that Marxism still exerts is in the so-called Third World (at least in those parts of it that have not yet had Marxist regimes). It is true that the Stasi are no longer available to train the secret police of any future tropical Ceausescu, but the downfall of communism in Eastern Europe will not affect every guerrilla movement in the world. In Peru, Sendero Luminoso, for example, will fight on, struggling to bring about the first Latin-American Cambodia (reports of which, if it ever happens, Noam Chomsky may be relied upon to dismiss as exaggerated).

The influence of Marxism in the Third World, however, extends much deeper than this, especially in Latin America and Africa. Much of Liberation Theology is 'Well I first noticed the rash about six weeks ago, and, uh, look — are you sure you're a dermatologist?' Pravda (before glasnost) with the word God thrown in. And there is a stifling orthodoxy among intellectuals in both con- tinents about the origins of the poverty which afflict them. Poverty for them is the dialectical opposite of wealth: we are poor because you are rich, and you are rich be- cause we are poor. Eduardo Galleano's famous work on the history of Latin America is one of many shot through with this profoundly destructive idea, which only an intellectual could be intelligent and stupid enough to believe.

Here, once again, is the idea that pover- ty is the result of exploitation and nothing else: the world is Marx's Victorian England writ large. The global economy is a cake, and if Europe (the bourgeoisie) has a large slice, Africa (the proletariat) must have a small one. The immiseration of the work- ers in Marx is paralleled by the immisera- tion of entire continents, and has the same fundamental causes. That poverty is the natural state of Man, and that it is the ascent to wealth that needs explanation (Adam Smith asked the right question), never occurs to the embittered intellec- tuals. Nor do they notice that even their backward countries have undergone tremendous changes in the last few years, not all of them for the worse, that they contain marvels undreamed of even by the rich of half a century ago, and that the international pecking order is not immut- ably fixed by the possession of capital (as we in Britain now know to our cost). The rise of South-East Asia is inexplicable on the Third-Worldist view, yet the view, which is entirely Marxist in inspiration, shows no decline in popularity and uncri- tical acceptance.

Why should this be? Why should the philosophy of a man who died a century ago, whose prophecies have been con- founded, and whose followers have caused some of the greatest catastrophes in his- tory, remain the single most important intellectual influence in the world today, more important by far than that of men of more profound insight?

Marxism answers several needs. It has its arcana, which persuade believers that they have penetrated to secrets veiled from others, who are possessed of false con- sciousness. It appeals to the strongest of all political passions, hatred, and justifies it. It provides a highly intellectualised rationa- lisation of a discreditable but almost uni- versal and ineradicable emotion: envy. It forever puts the blame elsewhere, making self-examination unnecessary and self- knowledge impossible. It explains every- thing. Finally, it persuades believers that they have a special destiny in the world. For disgruntled intellectuals, nothing could be more gratifying. The end of Marxism is definitely not nigh.

Anthony Daniels' The Wilder Shores of Marx is published this month by Hutch- inson (f16.99).