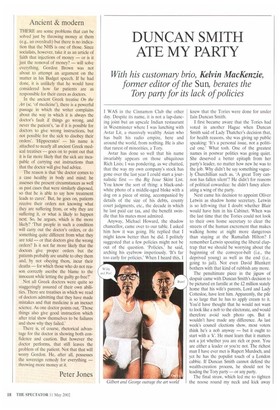 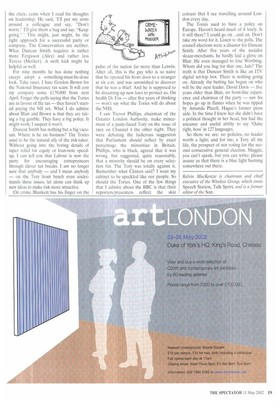 With his customary brio, Kelvin MacKenzie,

former editor of the Sun, berates the Tory party for its lack of policies

I WAS in the Cinnamon Club the other day. Despite its name, it is not a lap-dancing joint but an upscale Indian restaurant in Westminster where I was lunching with Avtar Lit, a massively wealthy Asian who has built his radio empire, here and around the world, from nothing. He is also that rarest of minorities, a Tory.

Avtar has done so well that his name invariably appears on those ubiquitous Rich Lists; I was pondering, as we chatted, that the way my own company's stock has gone over the last year I could start a journalistic first — the Big Issue Skint List. You know the sort of thing: a black-andwhite photo of a middle-aged bloke with a dog on a piece of string, accompanied by details of the size of his debts, county court judgments, etc., the decade in which he last paid car tax, and the benefit swindle that his mates most admired.

Anyway, Michael Howard, the shadow chancellor, came over to our table. I asked him how it was going. He replied that I might know better than he did. I politely suggested that a few policies might not be out of the question. 'Policies,' he said, arching his eyebrow imperiously. 'It's far too early for policies.' When I heard this, I knew that the Tories were done for under lain Duncan Smith.

I first became aware that the Tories had voted in another Hague when Duncan Smith said of Lady Thatcher's decision that, for health reasons, she was giving up public speaking: 'It's a personal issue, not a political one.' What tosh. One of the greatest names in postwar politics was going quiet. She deserved a better epitaph from her party's leader, no matter how new he was to the job. Why didn't he say something vaguely Churchillian such as, 'A great Tory cannon has fallen silent'? He didn't for reasons of political cowardice: he didn't fancy alienating a wing of the party.

Next came his decision to appoint Oliver Letwin as shadow home secretary. Letwin is so left-wing that I doubt whether Blair would have him in his Cabinet. When was the last time that the Tories could not look to their own home secretary to clear the streets of the human excrement that makes walking home at night more dangerous than staying at the Ramallah Hilton? I remember Letwin spouting the liberal claptrap that we should be worrying about the beginning of the conveyor-belt (i.e., the deprived young) as well as the end (i.e., going to jail). Not even David Blunkett bothers with that kind of rubbish any more.

The penultimate piece in the jigsaw of despair came with Duncan Smith's decision to be pictured en famille at the £2 million stately home that his wife's parents, Lord and Lady Cottesloe, have lent him. Apparently, the pile is so large that he has to apply cream to it. You'd have thought that he would not want to look like a nob to the electorate, and would therefore avoid such photo ops. But it wouldn't have made any difference. As last week's council elections show, most voters think he's a nob anyway — but it ought to start with a 'k'. He must learn that it matters not a jot whether you are rich or poor. You are either a leader or you're not. The richest man I have ever met is Rupert Murdoch, and yet he has the populist touch of a London cabbie. If Duncan Smith cannot defend the wealth-creation process, he should not be leading the Tory party — or any party.

The final straw, which led me to tighten the noose round my neck and kick away the chair, came when I read his thoughts

on leadership. He said, put my arms around a colleague and say, "Don't worry.I'll give them a hug and say, "Keep going." ' This might, just might, be the right approach for a successful party or company. The Conservatives are neither. What Duncan Smith requires is rather more Ferguson (Alex) and rather less Teresa (Mother). A swift kick might be helpful as well.

For nine months he has done nothing except adopt a something-must-be-done look. Take taxes. I hate Gordon Brown for the National Insurance tax scam. It will cost my company some £170,000 from next April. Forget the polls saying that the Tories are in favour of the tax — they haven't started paying the bill yet. What I do admire about Blair and Brown is that they are taking a big gamble. They have a big policy. It might work; I suspect it won't.

Duncan Smith has nothing but a big vacuum. Where is he on business? The Tories used to be the natural ally of the risk-taker. Without going into the boring details of taper relief for equity or loan-note speedup. I can tell you that Labour is now the party for encouraging entrepreneurs through clever tax breaks. I am no longer sure that anybody — and I mean anybody — on the Tory front bench even understands these issues, let alone can think up new ideas to make risk more attractive.

On crime Blunkett has his finger on the pulse of the nation far more than Letwin. After all, this is the guy who is so naive that he opened his front door to a stranger at six a.m. and was astonished to discover that he was a thief. And he is supposed to be dreaming up new laws to protect us. On health Dr Fox — after five years of thinking — won't say what the Tories will do about the NHS.

I saw Trevor Phillips, chairman of the Greater London Authority, make mincemeat of a pasty-faced Tory on the issue of race on Channel 4 the other night. They were debating the ludicrous suggestion that Parliament should reflect by exact percentage the minorities in Britain. Phillips, who is black, agreed that it was wrong, but suggested, quite reasonably, that a minority should be on every selection list, The Tory was totally against it. Remember what Clinton said? I want my cabinet to be speckled like our people. So should the Tories. One of the few things that I admire about the BBC is that their reporters/presenters reflect the skin

colours that 1 see travelling around London every day.

The Tories used to have a policy on Europe. Haven't heard much of it lately. Is it still there? I could go on ...and on. Don't take my word for it. Listen to the polls. The council elections were a disaster for Duncan Smith. After five years of the socialist sleaze-merchants, he hardly laid a glove on Blair. He even managed to lose Worthing. Whom did you hug for that one, Lain? The truth is that Duncan Smith is like an ITV digital set-top box. There is nothing going on. Already the betting has begun on who will be the next leader. David Davis — five years older than Blair, no front-line experience and chairman of the party — saw his hopes go up in flames when he was tipped by Amanda Plate11, Hague's former press aide. In the time I knew her she didn't have a political thought in her head, but had the uncanny and useful ability to say 'Quite right, boss' in 127 languages.

So there we are: no policies; no leader worth a light; and for me, a Tory all my life, the prospect of not voting for the second consecutive general election. Maggie, you can't speak, but you can write; please assure us that there is a blue light burning somewhere out there.

Kelvin MacKenzie is chairman and chief executive of the Wireless Group, which owns Speech Station, Talk Sport, and is a former editor of the Sun.