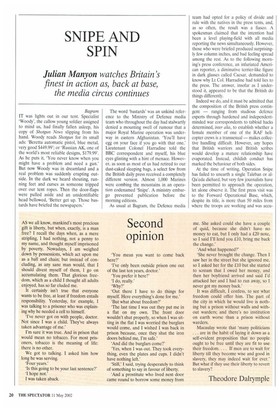 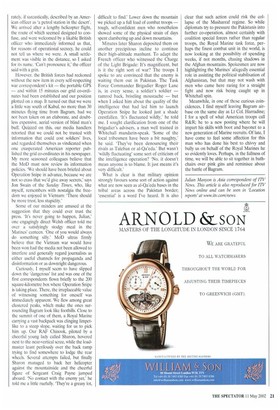 Bagram IT was lights out in our tent. Specialist 'Woody',

the callow young soldier assigned to mind us, had finally fallen asleep, his copy of Shotgun News slipping from his hand. Woody reads Shotgun for its small ads: 'Beretta automatic pistol, blue metal, very good $449.99'; or 'Russian AK, one of the world's most reliable designs, $179.99'. As he puts it, 'You never know when you might have a problem and need a gun.' But now Woody was in dreamland and a real problem was suddenly erupting outside. In the dark we heard shouting, running feet and curses as someone tripped over our tent ropes. Then the door-flaps were pulled aside and an unidentifiable head bellowed, 'Better get up. Those bastards have briefed the newspapers.'

The word 'bastards' was an unkind reference to the Ministry of Defence media team who throughout the day had stalwartly denied a mounting swell of rumour that a major Royal Marine operation was underway in eastern Afghanistan. 'You'll have egg on your face if you go with that one,' Lieutenant Colonel Harradine told the BBC correspondent and myself, his blue eyes glinting with a hint of menace. However, as soon as most of us had retired to our dust-caked sleeping bags, a select few from the British daily press received a completely different version. Almost 1,000 Marines were combing the mountains in an operation codenamed 'Snipe'. A ministry embargo prevented publication before the morning editions.

As usual at Bagram, the Defence media team had opted for a policy of divide and rule with the natives in the press tents, and, as so often, the result was a fiasco. A spokesman claimed that the intention had been a level playing-field with all media reporting the news simultaneously. However, those who were briefed produced surprisingly few column inches, and bad feeling spread among the rest. As to the following morning's press conference, an infuriated American reporter, a diminutive terrier-like figure in dark glasses called Caesar, demanded to know why Lt Col. Harradine had told lies to the press. The answer, insofar as I understood it, appeared to be that the British do things differently.

Indeed we do, and it must be admitted that the composition of the British press contingent — ranging from studious defence experts through hardened and independentminded war correspondents to tabloid hacks determined, inter alia, to establish whether a female member of one of the RAF helicopter crews is a transsexual — makes collective handling difficult. However, any hopes that British warriors and British scribes would develop a mature relationship have evaporated. Instead, childish conduct has marked the behaviour of both sides.

At the time of writing, Operation Snipe has failed to unearth a single Taleban or alQa'eda diehard, but very few journalists have been permitted to approach the operation, let alone observe it. The first press visit was to the Forward Operational Base, which, despite its title, is more than 50 miles from where the troops are working and was accu rately. if sarcastically, described by an American officer as 'a petrol station in the desert'. We arrived after a lengthy helicopter flight, the route of which seemed designed to confuse, and were welcomed by a likable British officer who immediately informed us that, for reasons of operational secrecy, he could not tell us where we were. A small settlement was visible in the distance, so I asked for its name. 'Can't pronounce it,' the officer said with a grin.

However, the British forces had reckoned without the new item in every self-respecting war correspondent's kit — the portable GPS — and within 15 minutes our grid co-ordinates had been established and our position plotted on a map. It turned out that we were a little way south of Kabul, no more than 30 minutes flying time from Bagram, had we not been taken on an elaborate, and doubtless expensive, aerial version of blind man's buff. Quizzed on this, our media handlers retorted that we could not be trusted with information that could cost soldiers' lives, and regarded themselves as vindicated when one exasperated American reporter published the grid co-ordinates in his newspaper. My more seasoned colleagues believe that the MoD must now review its information policies. 'We should have been briefed about Operation Snipe in advance, because we are not so crass that we'd give away secrets,' says Jon Swain of the Sunday Times, who, like myself, remembers with nostalgia the freedom we enjoyed in Vietnam: 'There should be more trust, less stupidity.'

Some of our minders are amused at the suggestion that they could ever trust the press. 'It's never going to happen, Julian,' one engagingly direct Welsh officer told me over a satisfyingly stodgy meal in the Marines' canteen. 'One of you would always do something silly.' MoD ultras firmly believe that the Vietnam war would have been won had the media not been allowed to interfere and generally regard journalists as either useful channels for propaganda and disinformation or as downright dangerous.

Curiously, I myself seem to have slipped down the 'dangerous' list and was one of the first correspondents flown briefly to the 200 square-kilometre box where Operation Snipe is taking place. There, the irreplaceable value of witnessing something for oneself was immediately apparent. We flew among great clustered peaks, which make the ones surrounding Bagram look like foothills. Close to the summit of one of them, a Royal Marine carrying a vast backpack was clinging limpetlike to a steep slope, waiting for us to pick him up. Our RAF Chinook, piloted by a cheerful young lady called Sharon, hovered next to the near-vertical scree, while the loadmaster leant perilously over the back ramp trying to find somewhere to lodge the rear wheels. Several attempts failed, but finally Sharon managed to back her helicopter against the mountainside and the cheerful figure of Sergeant Craig Payne jumped aboard. 'No contact with the enemy yet,' he told me a little ruefully. 'They're a greasy lot, difficult to find.' Lower down the mountain we picked up a full load of combat troops — tough, self-confident men who nonetheless showed some of the physical strain of days spent clambering up and down mountains.

Minutes later Sharon deposited them on another precipitous incline to continue their high-altitude manhunt. To adapt the French officer who witnessed the Charge of the Light Brigade: It's magnificent, but is it the right sort of war? The troops I spoke to are convinced that the enemy is waiting them out in Pakistan. The Task Force Commander Brigadier Roger Lane is, in every sense, a soldier's soldier — ramrod back, bristling moustache — but when I asked him about the quality of the intelligence that had led him to launch Operation Snipe he looked just a shade crestfallen. 'It's fluctuated wildly,' he told me. I sought clarification from one of the brigadier's advisers, a man well trained in Whitehall mandarin-speak. 'Some of the local tribesmen have been a bit naughty,' he said, 'They've been denouncing their rivals as Taleban or al-Qa'eda.' But wasn't 'wildly fluctuating' some sort of criticism of the intelligence operation? 'No, it doesn't mean anyone is to blame. It just means it's very difficult.'

What is clear is that military opinion strongly favours some sort of action against what are now seen as al-Qa'eda bases in the tribal areas across the Pakistan border; 'essential' is a word I've heard. It is also clear that such action could risk the collapse of the Musharraf regime. So while diplomats try to pressure the Pakistanis into further co-operation, almost certainly with coalition special forces rather than regular troops, the Royal Marine task force, perhaps the finest combat unit in the world, is now looking at the possibility of spending weeks, if not months, chasing shadows in the Afghan mountains. Spokesmen are now highlighting the Marines' allegedly essential role in assisting the political stabilisation of Afghanistan, but that may not wash with men who came here raring for a straight fight and now risk being caught up in Whitehall spin.

Meanwhile, in one of those curious coincidences, I find myself leaving Bagram airbase on the same day as Lt Col. Harradine; I for a spell of what American troops call R&R he to a new posting where he will impart his skills with boot and bayonet to a new generation of Marine recruits. Of late, I have come to feel some affection for this man who has done his best to chivvy and bully us on behalf of the Royal Marines he so evidently loves. Perhaps, in the fullness of time, we will be able to sit together in bathchairs over pink gins and reminisce about the battle of Bagram.

Julian Manyon is Asia correspondent of ITV News. This article is also reproduced for ITV News online and can be seen in Location reports' at www_iiv.comlnews.