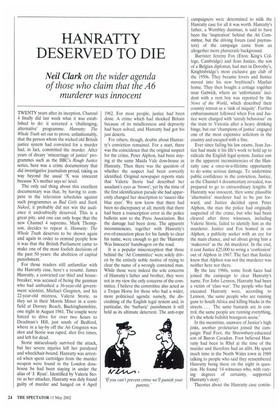 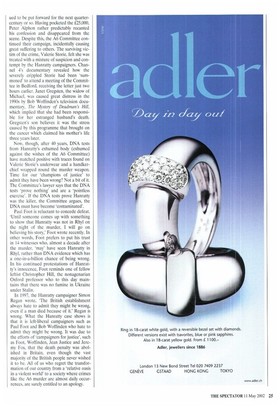 Neil Clark on the wider agenda

of those who claim that the A6 murderer was innocent

TWENTY years after its inception, Channel 4 finally did last week what it was established to do: it screened a 'challenging, alternative' programme. Hanratty: The Whole Truth set out to prove, unfashionably, that the person whom the wicked old British justice system had convicted for a murder had, in fact, committed the murder. After years of dreary 'miscarriage of justice' programmes such as the BBC's Rough Justice series, here was a crime documentary that did investigative journalism proud, taking us way beyond the usual 'X was innocent because X's mother says so' level.

The only sad thing about this excellent documentary was that, by having to compete in the television schedules against such programmes as Bad Girls and Stark Naked, it probably did not win the audience it undoubtedly deserved. This is a great pity, and one can only hope that the new Channel 4 supremo, Mark Thompson, decides to repeat it. Hanratty: The Whole Truth deserves to be shown again and again in order to remind people how it was that the British Parliament came to make one of the most foolish decisions of the past 50 years: the abolition of capital punishment.

For those readers still unfamiliar with the Hanratty case, here's a resume. James Hanratty, a convicted car thief and housebreaker, was accused of being the gunman who had ambushed a 36-year-old government scientist, Michael Gregsten, and his 22-year-old mistress, Valerie Stone, as they sat in their Morris Minor in a cornfield at Dorney Reach, Buckinghamshire, one night in August 1961. The couple were forced to drive for over two hours to Deadman's Hill, just south of Bedford, where in a lay-by off the A6 Gregsten was shot and Stone was raped, shot five times, and left for dead.

Stone miraculously survived the attack, but her severe injuries left her paralysed and wheelchair-bound. Hanratty was arrested when spent cartridges from the murder weapon were found in the London dosshouse he had been staying in under the alias of 'J. Ryan'. Identified by Valerie Storie as her attacker, Hanratty was duly found guilty of murder and hanged on 4 April 1962. For most people, justice had been done. A crime which had shocked Britain because of its mindlessness and depravity had been solved, and Hanratty had got his just deserts.

For others, though, doubts about Hanratty's conviction remained. For a start, there was the coincidence that the original suspect for the crime, Peter Alphon, had been staying at the same Maida Vale doss-house as Hanratty. Then there was the question of whether the suspect had been correctly identified. Original newspaper reports state that Valerie Stolle had described her assailant's eyes as 'brown', yet by the time of the first identification parade she had apparently changed her description to 'saucer-like blue eyes'. We now know that there had been no discrepancy at all; merely that there had been a transcription error in the police bulletin sent to the Press Association. But the damage had been done. The apparent inconsistencies, together with Hanratty's eve-of-execution pleas for his family to clear his name, were enough to get the 'Hanratty Was Innocent' bandwagon on the road.

It is a popular misconception that those behind the 'A.6 Committee' were solely driven by the entirely noble motive of trying to clear the name of a wrongly convicted man. While those were indeed the sole concerns of Hanratty's father and brother, they were not in my view the only concerns of the committee. I believe the committee also acted as a Trojan Horse for those who had a wider, more politicised agenda: namely, the discrediting of the English legal system and, in particular, the 'barbaric' punishment it still held as its ultimate deterrent. The anti-rope

campaigners were determined to milk the Hanratty case for all it was worth. Hanratty's father, a Wembley dustman, is said to have been the 'inspiration' behind the A6 Committee, but the driving forces (and paymasters) of the campaign came from an altogether more plutocratic background.

Barrister Jeremy Fox (Eton; King's College, Cambridge) and Jean Justice, the son of a Belgian diplomat, had met in Dorothy's, Knightsbridge's most exclusive gay club of the 1950s. They became lovers and Justice moved into his new boyfriend's Mayfair home. They then bought a cottage together near Gatwick, where an 'unfortunate' incident with a rent boy was reported by the News of the World, which described their country retreat as a 'sink of iniquity'. Further embarrassment followed when Fox and Justice were charged with 'unruly behaviour' on the train to Victoria after a heavy drinking binge, but our 'champions of justice' engaged one of the most expensive solicitors in the country and escaped with a fine.

Ever since failing his law exams, Jean Justice had made it his life's work to hold up to ridicule the English legal system. Justice saw in the apparent inconsistencies of the Hanratty case a once-in-a-lifetime opportunity to do some serious damage. To undermine public confidence in the conviction, Justice, as the Channel 4 documentary revealed, was prepared to go to extraordinary lengths. If Hanratty was innocent, then some plausible 'alternative' murderer had to be put forward, and Justice decided upon Peter Alphon, the man the police had originally suspected of the crime, but who had been cleared after three witnesses, including Valerie Stone, failed to identify him as the murderer. Justice and Fox homed in on Alphon, a publicity seeker with an eye for the main chance, and set about giving him a 'makeover' as the A6 murderer. In the end, it cost Justice £25,000 to wring a 'confession' out of Alphon in 1967. The fact that Justice knew that Alphon was not the murderer was neither here nor there.

By the late 1960s, some fresh faces had joined the campaign to clear Hanratty's name. For John Lennon, Hanratty had been a victim of 'class war'. The people who had executed Hanratty were, according to Lennon, 'the same people who are running guns to South Africa and killing blacks in the streets.... The same bastards are in control, the same people are running everything, it's the whole bullshit bourgeois scene.'

In the meantime, unaware of Justice's high jinks, another proletarian joined the campaign: Paul Foot, the Shrewsbury-educated son of Baron Caradon. Foot believed Hanratty had been in Rhyl at the time of the murder and therefore had an alibi. He spent much time in the North Wales town in 1969 talking to people who said they remembered Hanratty being there on the night in question. He found '14 witnesses who, with varying degrees of certainty, supported Hanratty's story'.

Theories about the Hanratty case contin

ued to be put forward for the next quartercentury or so. Having pocketed the £25,000, Peter Alphon rather predictably recanted his confession and disappeared from the scene. Despite this, the Ab Committee continued their campaign, incidentally causing great suffering to others. The surviving victim of the crime, Valerie Stone, felt she was treated with a mixture of suspicion and contempt by the Hanratty campaigners. Channel 4's documentary revealed how the severely crippled Stone had been 'summoned' to attend a meeting of the Committee in Bedford, receiving the letter just two hours earlier, Janet Gregsten, the widow of Michael, was caused great distress in the 1990s by Bob Woffinden's television documentary, The Mystery of Deadman's Hill, which implied that she had been responsible for her estranged husband's death. Gregsten's son believes it was the stress caused by this programme that brought on the cancer which claimed his mother's life three years later.

Now, though, after 40 years, DNA tests from Hanratty's exhumed body (exhumed against the wishes of the A6 Committee) have matched positive with traces found on Valerie Stone's underwear and a handkerchief wrapped round the murder weapon. Time for our 'champions of justice' to admit they have been wrong? Not a bit of it. The Committee's lawyer says that the DNA tests 'prove nothing' and are a 'pointless exercise'. If the DNA tests prove Hanratty was the killer, the Committee argues, the DNA must have become 'contaminated', Paul Foot is reluctant to concede defeat. 'Until someone comes up with something to show that Hanratty was not in Rhyl on the night of the murder, I will go on believing his story,' Foot wrote recently. In other words, Foot prefers to put his trust in 14 witnesses who, almost a decade after the murder, 'may' have seen Hanratty in Rhyl, rather than DNA evidence which has a one-in-a-billion chance of being wrong. In his continued protestations of Hanratty's innocence, Foot reminds one of fellow leftist Christopher Hill, the nonagenarian Oxford professor who to this day maintains that there was no famine in Ukraine under Stalin.

In 1997, the Hanratty campaigner Simon Regan wrote. 'The British establishment always hate to admit they might be wrong, even if a man died because of it.' Regan is wrong. What the Hanratty case shows is that it is left-liberal campaigners such as Paul Foot and Bob Woffinden who hate to admit they might be wrong. It was due to the efforts of 'campaigners for justice', such as Foot, Woffinden, Jean Justice and Jeremy Fox, that the death penalty was abolished in Britain, even though the vast majority of the British people never wished it to be. All of us who regret the transformation of our country from a 'relative oasis in a violent world' to a society where crimes like the A6 murder are almost daily occurrences, are surely entitled to an apology.