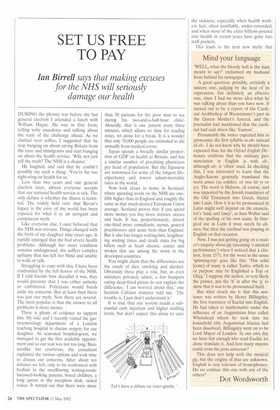 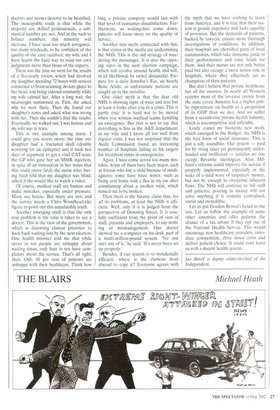 SET US FREE TO PAY

for the NHS will seriously damage our health

DURING the phoney war before the last general election I attended a lunch with William Hague. He was in fine form, telling witty anecdotes and talking about the scale of the challenge ahead. As we chatted over coffee, I suggested that he stop banging on about saving Britain from the euro and immigrants and start banging on about the health service. 'Why not just tell the truth? The NHS is a disaster.'

He laughed, and said that he couldn't possibly say such a thing: 'You're far too right-wing on health for us.'

Less than two years and one general election later, almost everyone accepts that our national health service is sick. The only debate is whether the illness is terminal. The widely held view that Bevan's legacy is the envy of the world has been exposed for what it is: an arrogant and complacent myth.

Like everyone else, I once believed that the NHS was nirvana. Things changed with the birth of my daughter nine years ago. It rapidly emerged that she had severe health problems. Although her exact condition remains undiagnosed, she suffers complex epilepsy that has left her blind and unable to walk or talk.

Struggling to cope with this, I have been confronted by the full horror of the NHS. If! told friends how dreadful it was, they would presume that I was either unlucky or embittered. Politicians would brush aside my concerns. But at least then there was just one myth. Now there are several. The most popular is that the answer to all problems is more money.

There is plenty of evidence to support this. My wife and I recently visited the gastroenterology department of a London teaching hospital to discuss surgery for our daughter. As seasoned hospital-goers, we managed to get the first available appointment and so our wait was not too long. Businesslike but courteous, the consultant explained the various options and took time to discuss our concerns. After about ten minutes we left, only to be confronted with bedlam in the overflowing waiting-room: harassed-looking parents, bored children, a long queue at the reception desk, raised voices. It turned out that there were more than 50 patients for the poor man to see during his two-and-a-half-hour clinic. Absurdly, that is one patient every three minutes, which allows no time for reading notes, let alone for a break. It is a wonder that only 70,000 people are estimated to die annually from medical errors.

Japan spends a broadly similar proportion of GDP on health as Britain, and has a similar number of practising physicians per head of population. But the Japanese are renowned for some of the longest lifeexpectancy and lowest infant-mortality rates in the world.

Now look closer to home in Scotland, where spending levels on the NHS are onefifth higher than in England and roughly the same as that much-desired European Union average. Scotland proves that if you spend more money you buy more doctors, nurses and beds. It has, proportionately, almost one-third more consultants, nurses, general practitioners and acute beds than England. But it also has longer waiting-lists, lengthening waiting times and death rates for big killers such as heart disease, cancer and strokes that are among the worst in the developed countries.

You might claim that the differences are the result of diet, smoking and alcohol. Obviously these play a role, but, as even ministers privately admit, a few bampots eating deep-fried pizzas do not explain the difference. 'I am worried about this,' one Scottish Cabinet minister told me. 'The trouble is, I just don't understand it.'

It is true that our system needs a substantial cash injection and higher staffing levels, but don't expect this alone to cure the sickness; especially when health workers feel, often justifiably, under-rewarded, and when most of the extra billions poured into health in recent years have gone into staff pockets.

This leads to the next new myth: that doctors and nurses deserve to be beatified, The inescapable truth is that while the majority are skilled professionals, a substantial number are not. And in the rush to bolster numbers, this minority will increase. I have seen too much arrogance, too many misdeeds, to be confident of the quality of the care received; my wife and I have learnt the hard way to trust our own judgments more than those of the experts.

There was the time we went for the results of a five-yearly review, which had involved my daughter spending 72 hours with sensors connected to brain-scanning devices glued to her head, and being videoed constantly while my wife calmed her. After a long wait, the neurologist summoned us. First, she asked why we were there. Then she found our daughter's notes and asked what was wrong with her. Then she couldn't find the results. Eventually, we walked out; I was furious and my wife was in tears.

This is one example among many. I could give you scores more: the time our daughter had a fractured skull (doubly worrying for an epileptic) and it took two days of argument to get a vital CAT-scan; the GP who gave her an MMR injection, in spite of an instruction in her notes that this could prove fatal; the nurse who, having been told that my daughter was blind, asked if she would like to watch a video.

Of course, medical staff are human and make mistakes, especially under pressure. Many are heroic. But many are not, and the service needs a Chris Woodhead-like figure to point out this unpalatable truth.

Another emerging myth is that the only real problem is the time it takes to see a doctor, This is the view of the government, which is distorting clinical priorities to hack back waiting-lists by the next election. One health minister told me that while seven in ten people are unhappy about waiting times, only four in ten have complaints about the service. That's all right, then. Only 40 per cent of patients are unhappy with their healthcare. Think how long a private company would last with that level of consumer dissatisfaction. Furthermore, as waiting-lists come down, patients will focus more on the quality of service.

Another new myth, connected with this, is that cynics in the media are undermining the NHS. This is the old strategy of murdering the messenger. It is also the opening salvo in the next election campaign, which will revolve around health and will, in all likelihood, be rather distasteful. Prepare for a daily Jennifer's Ear, an hourly Rose Addis, as unfortunate patients are caught up in the crossfire.

One older myth is that the dear old NHS is showing signs of wear and tear but at least it looks after you in a crisis. This is partly true: it is hard not to be moved when you witness medical teams handling an emergency. But that is not to say that everything is fine in the A&E department, as my wife and I know all too well from regular visits. I was not surprised that the Audit Commission found an increasing number of hospitals failing to hit targets for treatment times in emergencies.

Again, I have come across too many mistakes. Some of them have been major, such as friends who lost a child because of misdiagnosis; some have been minor, such as being sent home with a flea in my ear after complaining about a swollen wrist, which turned out to be broken.

Then there is the bizarre claim that, for all its problems, at least the NHS is efficient. Well, only if it is judged from the perspective of Downing Street. It is woefully inefficient from the point of view of staff, patients and employers, to say nothing of mismanagement. One doctor showed me a computer on his desk, part of a multi-million-pound system. No one uses any of it,' he said. It's never been set up properly.'

Besides, if our system is so wonderfully efficient, where is the clamour from abroad to copy it? Everyone agrees with the myth that we have nothing to learn from America, and it is true that their system is grossly expensive and lacks equality of provision. But the demands of patients, backed by lawyers, ensure more thorough investigations of conditions. In addition, their hospitals are cherished parts of local communities, which take immense pride in their performances and raise funds for them. And their nurses are not only better paid but also occupy a more senior role in hospitals, where they effectively act as champions of their patients.

But don't believe that private healthcare has all the answers. In nearly all Western systems most of the revenue comes from the state (even America has a higher public expenditure on health as a proportion of its GDP than we do). And we suffer from a second-rate private-health industry, which is uncompetitive and inflexible.

Lastly comes my favourite new myth, which emerged in the Budget: the NHS is the best form of social insurance. This is just a silly soundbite. Our system — paid for by rising taxes yet permanently underfunded and inefficient — satisfies no one except Bevanite ideologues. Alan Milburn's reforms could improve the service if properly implemented, especially in the wake of a tidal wave of taxpayers' money, but not by enough to overcome inherent flaws. The NHS will continue to fail staff and patients; pouring in money will not solve anything if it remains centralised, statist and monolithic.

Let us put Gordon Brown's belief to the test. Let us follow the example of some other countries and offer patients the chance of a tax rebate if they opt out of the National Health Service. This would encourage new healthcare providers, introduce competition, drive down costs and deliver patient choice. It could even leave us with a decent health system.

Ian Birrell is deputy editor-in-chief of the Independent.