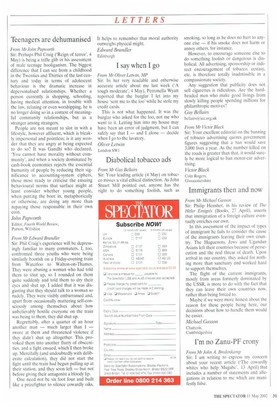 Immigrants then and now

From Mr Michael Gasson Sir: Philip Hensher, in his review of The Hitler Emigres (Books, 27 April), asserts that immigration of a foreign culture eventually enriches our own.

In this assessment of the impact of types of immigrant he fails to consider the cause of the immigrants leaving their own country. The Huguenots, Jews and Ugandan Asians left their countries because of persecution and the real threat of death. Upon arrival in our country, they asked for nothing more than sanctuary and worked hard to support themselves.

The flight of the current immigrants, mostly from areas formerly dominated by the USSR, is more to do with the fact that they can leave their own countries now. rather than being forced to.

Maybe if we were more honest about the reason for these people being here, our decisions about how to handle them would be easier.