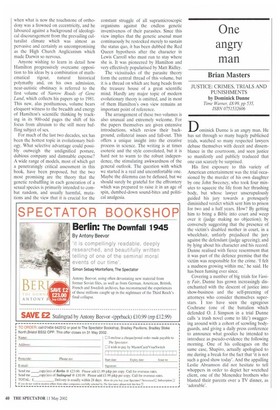 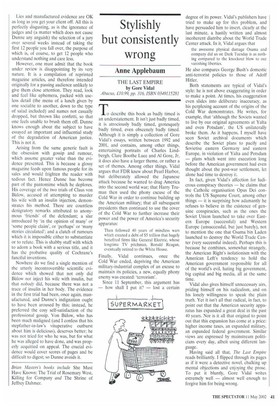 Dorninick Dunne is an angry man. He has sat through so many hugely publicised trials, watched so many respected lawyers debase themselves with deceit and dissemblance in the courtroom, and seen justice so manifestly and publicly traduced that one can scarcely be surprised.

His first exposure to this variety of American entertainment was the trial occasioned by the murder of his own daughter by one John Sweeney, who took four minutes to squeeze the life from her thrashing body, but whose lawyer unscrupulously guided his jury towards a grotesquely diminished verdict which sent him to prison for two and a half years. How? By getting him to bring a Bible into court and weep over it (judge making no objection); by conversely suggesting that the presence of the victim's disabled mother in court, in a wheelchair, unfairly prejudiced the jury against the defendant (judge agreeing); and by lying about his character and his record. Dunne realised with fierce resentment that it was part of the defence premise that the victim was responsible for the crime. 'I felt a madness growing within me,' he said. He has been fuming ever since.

Covering a number of big trials for Vanity Fair, Dunne has grown increasingly disenchanted with the descent of justice into show-business and the self-preening of attorneys who consider themselves superstars. I too have seen the egregious Cochrane (one of the battalion which defended 0. J. Simpson in a trial Dunne calls 'a trash novel come to life') swaggering around with a cohort of scowling bodyguards, and giving a daily press conference to announce what goodies he intended to introduce as pseudo-evidence the following morning. One of his colleagues on the same case, Shapiro, actually apologised to me during a break for the fact that 'it is not such a good show today'. And the appalling Leslie Abramson did not hesitate to tell whoppers in order to depict her wretched client, one of the Menendez brothers who blasted their parents over a TV dinner, as 'adorable'. Lies and manufactured evidence are OK as long as you get your client off. All this is perfectly disgusting, as is the ignorance of judges and (a matter which does not cause Dunne any anguish) the selection of a jury over several weeks instead of taking the first 12 people you fall over, the purpose of which is, of course, to get 12 people who understand nothing and care less.

However, one must admit that the book under review is disappointing by its very nature. It is a compilation of reprinted magazine articles, and therefore intended originally for a passing audience unlikely to give them close attention. They read, look and feel like ephemera, packed with useless detail (the menu of a lunch given by one socialite to another, down to the type of salad included) and names not casually dropped, but thrown like confetti, so that one feels unable to brush them off. Dunne knows enough about the subject to have essayed an important and influential study of the degradation of American justice. This is not it.

Arising from the same generic fault is the obsession with gossip and rumour, which assume greater value than the evidence presented. This is because a glossy magazine feeds upon famous people for its sales and would frighten the reader with tedious fact. Hence Dunne has become part of the pantomime which he deplores. His coverage of the two trials of Claus von Billow, accused of attempting to murder his wife with an insulin injection, demonstrates his method. There are countless denigrator), remarks attributed to anonymous .friends' of the defendant; a slur introduced by 'in the opinion of many' or 'some people claim', or 'perhaps' or 'many stories circulated': and a clutch of rumours which it is impossible either to substantiate or to refute. This is shabby stuff with which to adorn a book with a serious title, and it has the probative quality of Cochrane's fanciful inventions.

Nowhere do we find a single mention of the utterly incontrovertible scientific evidence which showed that not only did Billow not inject his wife with insulin, but that nobody did, because there was not a trace of insulin in her body. The evidence in the first trial had been, once again, manufactured, and Dunne's indignation ought to have been aroused by this; instead, he preferred the cosy self-satisfaction of the professional gossip. Von Billow, who has been much maligned (and I confess that his stepfather-in-law's vituperative outburst about him is delicious), deserves better; he was not tried for who he was, but for what he was alleged to have done, and was properly acquitted on appeal. The crucial evidence would cover scores of pages and be difficult to digest; so Dunne avoids it.

Brian Masters's books include She Must Have Known: The Trial of Rosemary West, Killing for Company and The Shrine of Jeffrey Dahmer.