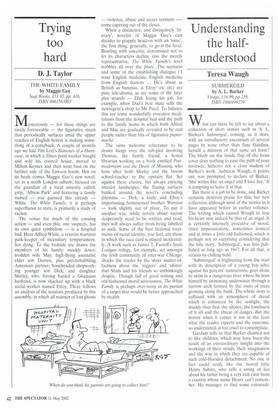 Mysteriously — for these things are rarely foreseeable — the figurative strain that periodically surfaces amid the upper reaches of English fiction is making something of a comeback. A couple of months ago we had Tim Lott's Rumours of a Hurricane, in which a Times print worker bought and sold his council house, moved to Milton Keynes and then went bust on the further side of the Lawson boom. Hot on its heels comes Maggie Gee's new novel, set in a north London suburb, focused on the guardian of a local amenity called, gulp, 'Albion Park' and featuring a family named — you guessed this already — White. The White Family, it is perhaps superfluous to state, is primarily a study of racism.

The venue for much of the ensuing action — and even this, one suspects, has its own quiet symbolism — is a hospital bed. Here Alfred White, a veteran martinet park-keeper of incendiary temperament, lies dying. To the bedside are drawn the members of his family: meekly downtrodden wife May; high-flying journalist elder son Darren, plus psychobabbling American partner; boneheaded shopworking younger son Dirk; and daughter Shirley, who, having buried a Ghanaian husband, is now shacked up with a black social worker named Elroy. There follows an analysis of the tensions produced by this assembly, in which all manner of lost ghosts violence, abuse and secret torment — come capering out of the closet.

When a distinctive, and distinctively 'literary', novelist of Maggie Gee's cast decides to grapple head-on with an 'issue', the first thing, generally, to go is the level. Bristling with sincerity, determined not to let its characters decline into the merely representative, The White Family's level wobbles all over the place. The scenario and some of the establishing dialogue (I want English medicine, English medicine from English doctors ... He's about as British as bananas, is Elroy' etc etc) are pure tele-drama, as are some of the later plot strands — Dirk losing his job, for example, when Dad's best mate sells the newsagent's shop to Mr Patel. To balance this are some wonderfully evocative meditations from the hospital bed and the path to the family home in which both Alfred and May are gradually revealed to be real people rather than bits of figurative papiermache.

The same welcome reluctance to be drawn hangs over the sub-plot involving Thomas, the family friend, a bored librarian working on a book entitled Postmodernism and the Death of Meaning, who lusts after both Shirley and the lissom school-teacher in the upstairs flat. Set against these elusive, but always enticing interior landscapes, the flaring surfaces banked around the novel's concluding dilemma — Dirk, a knife and Elroy's importuning homosexual brother Winston — look slightly out of place. To put it another way, while novels about racism desperately need to be written and read, they will always suffer from being labelled as such. Some of the best fictional treatments of racial identity, you feel, are those in which the race card is played incidentally. A work such as James T. Farrell's Studs Lonigan trilogy, for example, set amongst the Irish community of inter-war Chicago, shocks the reader by the sheer matter-offactness about the 'niggers' and 'shines' that Studs and his friends so unthinkingly despise. Though full of good writing and old-fashioned moral seriousness, The White Family is perhaps over-noisy in its pursuit of a target that would be better approached by stealth.