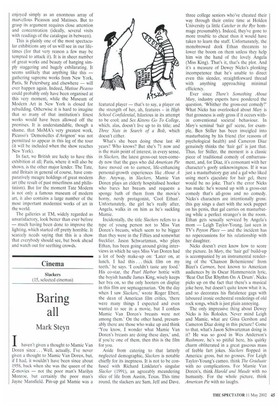 featured player — that's to say, a player on the strength of her, ah, features – in High School Confidential, hilarious in its attempt to be cool; and Sex Kittens Go To College, which, alas, doesn't live up to its title: and Three Nuts in Search of a Bolt, which doesn't either.

Incidentally, the title Slackers refers to a type of young person not to Miss Van Doren's breasts, which seem to be bigger than they were in the Fifties and somewhat frecklier. Jason Schwartzman, who plays Ethan, has been going around giving interviews in which he says Miss Van Doren had a lot of body make-up on: 'Later on, at lunch, I had this . thick film on my teeth.' he says. 'I couldn't taste any food.' His co-star, the Pearl Harbor hottie with the boyish handle James King, wisely keeps her bra on, so the only hooters on display in this film are septuagenarian. 'On the day when I saw Slackers,' wrote Roger Ebert, the dean of American film critics, 'there were many things I expected and even wanted to see in a movie, but I confess Mamie Van Doren's breasts were not among them.' On the other hand, presumably there are those who wake up and think 'You know, I wonder what Mamie Van Doren's breasts are doing these days,' and, if you're one of them, then this is the film for you.

Aside from catering to that latterly neglected demographic, Slackers is notable chiefly for its ineptness. It is not to be confused with Richard Linklater's singular Slacker (1991), an agreeably meandering slice of life from Austin, Texas. This time round, the slackers are Sam, Jeff and Dave,

three college seniors who've cheated their way through their entire time at Holden University (a little Catcher in the Rye hornmage presumably). Indeed, they've gone to more trouble to cheat than it would have taken to learn the stuff. Unfortunately, the monobrowed dork Ethan threatens to lower the boom on them unless they help him win the hand of the lovely Angela (Miss King). That's it, that's the plot. And it's a measure of Dewey Nicks's plonking incompetence that he's unable to direct even this slender, straightforward thread with anything approaching minimal efficiency.

Nicks doesn't even know how to score the picture. In Mary, the 'hair gel' build-up is accompanied by an instrumental rendering of the 'Chanson Bohemienne' from Bizet's Carmen, best known to American audiences by its Oscar Hammerstein lyric, 'Beat Out Dat Rhythm On A Drum'. Nicks picks up on the fact that there's a musical joke here, but doesn't quite know what it is, and so decorates his flatulence gags with laboured ironic orchestral renderings of old rock songs, which is just plain annoying.

The only impressive thing about Dewey Nicks is his Rolodex. Never mind Leigh and Mamie, what are Gina Gershon and Cameron Diaz doing in this picture? Come to that, what's Jason Schwartzman doing in it? He was so good in Wes Anderson's Rushmore, he's so pitiful here, his quirky charm obliterated in a great gaseous mass of feeble fart jokes. Slackers flopped in America: gross, but no grosses. For Leigh Taylor-Young's cameo, think The Graduate with no complications. For Mamie Van Doren's, think Harold and Maude with no humanity. For the whole picture, think American Pie with no laughs.