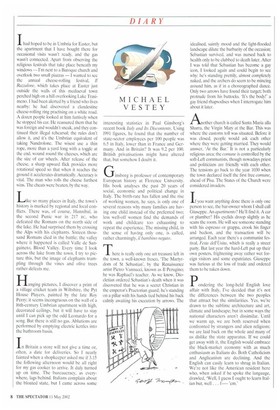 Ihad hoped to be in Umbria for Easter, but the apartment that I have bought there for occasional visits wasn't ready, and the gas wasn't connected. Apart from observing the religious festivals that take place beneath my windows — I'm next to a Baroque church and overlook two small pianas — I wanted to see the annual cheese-rolling festival, Ii Ruzzalone, which takes place at Easter just outside the walls of this mediaeval town perched high on a hill overlooking Lake Trasimeno. I had been alerted by a friend who lives nearby; he had discovered a clandestine cheese-rolling ring practising on a white road. A dozen people looked at him furtively when he stopped his car. He reassured them that he was foreign and wouldn't sneak, and they continued their illegal rehearsal; the rules don't allow it, and it's the Umbrian equivalent of taking Nandrolone. The wisest use a thin rope, more than a yard long with a toggle at the end, wound round the cheeses, which are the size of car wheels. After release of the cheese, a sharp upward flick provides more rotational speed so that when it reaches the ground it accelerates dramatically. Accuracy is vital. The man who rolls the cheese furthest wins. The cheats were beaten, by the way.

Like so many places in Italy, the town's history is marked by regional and local conflicts. There was, of course, Hannibal, in the second Punic war in 217 BC, who defeated the Romans on the north side of the lake. He had surprised them by crossing the Alps with his elephants. Sixteen thousand Romans died in the battle; the valley where it happened is called Valle de Sanguineto, Blood Valley. Every time I look across the lake from the town, I try to picture this, but the image of elephants trampling through the vines and olive trees rather defeats me.

Hanging pictures, I discover a print of a village cricket team in Wiltshire, the Pyt House Players, painted by the late Roy Perry; it seems incongruous on the wall of a 16th-century Umbrian apartment with high, decorated ceilings, but it will have to stay until I can pick up the odd Leonardo for a song. But there is still no gas. Ablutions are performed by emptying electric kettles into the bathroom basin.

In Britain a store will not give a time or. often, a date for deliveries. So I nearly fainted when a shopkeeper asked me if 3.15 the following afternoon would be all right for my gas cooker to arrive. It duly turned up on time. The bureaucracy, as everywhere, lags behind. Italians complain about the bloated state. but I came across some

interesting statistics in Paul Ginsborg's recent book Italy and Its Discontents. Using 1991 figures, he found that the number of state-sector employees per 100 people was 6.5 in Italy, lower than in France and Germany. And in Britain? It was 9.2 per 100. British privatisations might have altered that, but somehow I doubt it.

Ginsborg is professor of contemporary European history at Florence University. His book analyses the past 20 years of social, economic and political change in Italy. The birth-rate has fallen and the rise of working women, he says, is only one of several reasons why many families are having one child instead of the preferred two; less well-off women find the demands of work and childcare too exhausting to repeat the experience. The missing child, in the sense of having only one, is called, rather charmingly, il bambino negato.

There is really only one art treasure left in the town, a well-known fresco, 'The Martyrdom of St Sebastian', by the Renaissance artist Pietro Vannucci, known as II Perugino; he was Raphael's teacher. As we know, Diocletian ordered Sebastian's death when it was discovered that he was a secret Christian in the emperor's Praetorian guard; he's standing on a pillar with his hands tied behind his back calmly awaiting his execution by arrows. The

idealised, saintly mood and the light-flooded landscape dilute the barbarity of the occasion; Sebastian survived, and was nursed back to health only to be clubbed to death later. After I was told that Sebastian has become a gay icon, I looked again and could begin to see why: he's standing prettily, almost completely naked, and the archers do seem to be mincing around him, as if in a choreographed dance. Only two arrows have found their target; both protrude from his buttocks. 'It's the body!' a gay friend rhapsodises when I interrogate him about it later.

Aniother church is called Santa Maria alla Sharra, the Virgin Mary at the Bar. This was where the customs toll was situated. Before it was closed, people would ask each other where they were getting married. They would answer, 'At the Bar.' It is not a particularly religious area: the comune is controlled by the soft-Left communists, though nowadays priest and politicians are friendly with each other. The tensions go back to the year 1030 when the town declared itself the first free comune, ahead of Pisa. The States of the Church were considered invaders.

If you want anything done there is only one person to see, the bar-owner whom I shall call Giuseppe. An apartimento? He'll find it. A car or plumber? His eyelids droop slightly as he scans the room. He will see someone standing with his espresso or grappa, crook his finger and beckon, and the transaction will be arranged. Each year there's a communist festival, Festa dell'Unita, which is really a street party. But last year the hard-Left put up their own posters, frightening away rather wet foreign visitors and some expatriates. Giuseppe was furious at the loss of trade and ordered them to be taken down.

Pondering the long-held English love affair with Italy, I've decided that it's not the differences between the two peoples that attract but the similarities. Yes, we're drawn to the sublime architecture and art, climate and landscape; but in some ways the national characters aren't dissimilar. Until we warm up, we are both reserved when confronted by strangers and alien religions; we are laid back on the whole and many of us dislike the state apparatus. If we could get away with it, the English would embrace the black-market economy with as much enthusiasm as Italians do. Both Catholicism and Anglicanism are declining. And the English can easily learn to shrug in Italian. We're not like the American resident here who, when asked if he spoke the language, drawled, 'Well, I guess I ought to learn Italian but. well ... f-'em.'