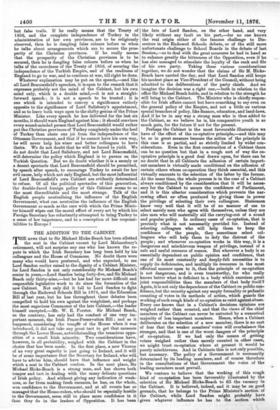 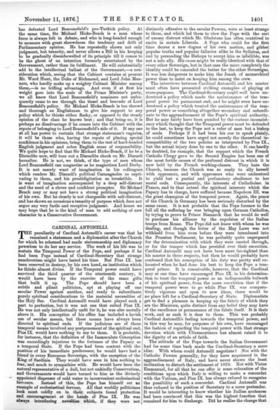 THE ADDITION TO THE CABINET.

THE news that to Sir Michael Hicks-Beach has been allotted the seat in the Cabinet vacant by Lord Tdalmesbury's retirement, will not surprise any one who has known the re- pute in which the Irish Secretary has long been held by his colleagues and the House of Commons. No doubt there were many who would have preferred, and who expected, to see Lord Bandon earlier raised to the dignity of a Cabinet Minister, for Lord Bandon is not only considerably Sir Michael Beach's senior in years,—Lord Sandon being forty-five, and Sir Michael Beach only thirty-nine,—but he has had far more difficult and responsible legislative work to do since the formation of the new Cabinet. Not only did it fall to Lord Bandon to fight through the Endowed Schools Bill in 1874, and the Education Bill of last year, but he has throughout these debates been compelled to hold his own against the weightiest, and perhaps the most sagacious Commoner of the late Cabinet,—the leader himself excepted,—Mr. W. E. Forster. Sir Michael Beach, on the contrary, has only had the conduct of one very im- portant measure, the Irish Peace-Preservation Bill ; and as it happened, considering the temptr of the House when it was introduced, it did not take any great tact to get that measure through the Lower House, notwithstanding the tenacious oppo- sition of a small Irish minority. Two considerations have, however, in all probability, weighed with the Cabinet in the choice that has been made. In the first place, a new Viceroy of no very great sagacity is just going to Ireland, and it will be of some importance that the Secretary for Ireland, who • have to advise him, should have that influence and weight which a seat in the Cabinet confers. In the next place, Sir Michael Hicks-Beach is a strong man, and has shown both temper and tact in dealing with the many delicate questions of Irish policy. And without giving any indication of weak- ness, so far from making fresh enemies, he has, on the whole, won confidence to the Government, and at all events has so managed that the Home-rulers, who should be especially hostile to the Government, seem still to place more confidence in it than they do in the leaders of Opposition. It has been the fate of Lord Bandon, on the other hand, and very likely without any fault on his part,—for no one knows the real origin either of the famous eh allenge to Dis- senters in the Endowed Schools debate, or of the still more unfortunate challenge to School Boards in the debate of last Session,—so to deal with the great measures he had in hand as to enhance greatly the bitterness of the Opposition, even if he has also managed to stimulate the loyalty of the rank and file of his own party. Taking these various considerations together, we do not wonder that the claims of Sir M. Hicks- Beach have carried the day, and that Lord Bandon still keeps his modest place as Vice-President of the Council, without being admitted to the deliberations of the party chiefs. And we imagine the decision was a right one —both in relation to the office Sir Michael Beach holds, and in ;elation to the strength he will bring to the Cabinet. The Minister who is chiefly respon- sible for Irish affairs cannot but have something to say even on the general policy of the Empire, and not a little on various special branches of policy, like finance, education, and land-laws. And if he be in any way a strong man who is thus added to the Cabinet, as we believe he is, his comparative youth is so much gain, for the future if not for the present.

Perhaps the Cabinet is the most favourable illustration we have of the effect of the co-optative principle,—and this may be so in great measure because the action of the principle in this case is so partial, and so strictly limited by wider con- siderations. Even in the first construction of a Cabinet there can be no question but that in a rough sort of way the co- optative principle is a good deal drawn upon, for there can be no doubt that in all Cabinets the adhesion of certain import- ant members is virtually made conditional on the adhesion of certain others whose co-operation they think essential, and this virtually amounts to the selection of the latter by the former. At the same time, the whole process is in the case of a Cabinet always conditioned by the consideration that it will be neces- sary for the Cabinet to secure the confidence of Parliament, and it is this ulterior consideration which prevents the nar- rowing effect so- often produced by giving those in power the privilege of selecting their own colleagues. Statesmen know very well that it will be of no manner of use to select merely men who agree with themselves, unless they are also men who will materially aid the carrying-out of a sound and popular policy. In ordinary cases of co-optation, that is precisely what is not necessarily provided for. Instead of selecting colleagues who will help them to keep the confidence of the people, they sometimes select col- leagues who - will help them to defy the distrust of the people ; and whenever co-optation works in this way, it is a dangerous and mischievous weapon of privilege, instead of a safe and useful resource of reason. But wherever a body is so essentially dependent on public opinion and confidence, that one of its most constantly and deeply-felt necessities is to supply its deficiencies, and multiply its resources in the most effectual manner open to it, then the principle of co-optation is not dangerous, and is even trustworthy, for who really knows better what is deficient in a body which exercises great joint responsibilities than the members of that body itself Again, it is not only the dependence of the Cabinet on public con- fidence, but the security against any empty formality or pedantic counting of votes in its methods of action, which guards the working of such rough kinds of co-optation as exist against abuse. Every one knows that in a Cabinet's decisions opinions are weighed rather than counted, and that the views of the chief members of the Cabinet can never be outvoted by a numerical majority of less important members. Hence, when a Cabinet deliberates on the selection of a new member, there is no sort of fear that the weaker members' votes will overbalance the stronger, and that is one of the worst dangers of the principle of co-optation. If we had only the means of getting voters weighed rather than merely counted in other cases, we might trust co-optation where at present it would be purely mischievous. And in Cabinets this is not only possible, but necessary. The policy of a Government is necessarily determined by its leading members, and of course therefore in the consultations of that Government the voice of the leading members must prevail.

We venture to believe that the working of this rough kind of co-optation has been favourably illustrated by the selection of Sir Michael Hicks-Beach to fill the vacancy in the Cabinet. It is believed, indeed, and it may be on good grounds, that he belongs to the Prime Minister's section of the Cabinet, while Lord Bandon might probably have given whatever influence he has to the section which has defeated Lord Beaconsfield's pro-Turkish policy. At the same time, Sir Michael Hicks-Beach is a man whose force is always felt in debate, and who is long-headed enough to measure with great shrewdness the tendency and drift of Parliamentary opinion. He has repeatedly shown not only judgment, but tenacity, and never allows a Bill in his keeping to be gradually disembowelled of its principle till it comes to be the ghost of an intention formerly entertained by the Government, rather than its fulfilment. He will substantially add to the intellectual ballast of the Government,—a con- sideration which, seeing that the Cabinet contains at present Mr. Ward Hunt, the Duke of Richmond, and Lord John Man- ners, who hardly make up a weighty Cabinet Minister among them,—is no trifling advantage. And even if at first his weight goes into the scale of the Prime Minister's party, we all know that Lord Beaconsfield's nominees not unfre- quently come to see through the tinsel and bravado of Lord Beaconsfield's policy. Sir Michael Hicks-Beach is too shrewd and thorough an Englishman to give his support to any policy which he thinks either flashy, or opposed to the steady opinion of the class he knows best ; and that being so, it is perhaps no disadvantage if he comes into the Cabinet with the repute of belonging to Lord Beaconsfield's side of it. If any one at all has power to restrain that strange statesman's vagaries, it will be those who, having the repute of placing special confidence in his opinions, bring them to the test of hard-headed English judgment and sober English sense of responsibility. We quite hope to find that Sir Michael Hicks-Beach, if he be a Disraelite now, will turn out a Disraelite check on Mr. Disraeli hereafter. He is not, we think, of the type of men whom Lord Beaconsfield can magnetise as he magnetises Lord Derby. It is not merely want of imagination in his colleagues which renders Mr. Disraeli's political Carmagnoles so capti- vating to them, and his prestidigitation so irresistible. It is want of imagination accompanied by a deep self-distrust and the need of a clever and confident prompter. Sir Michael Beach may or may not have a strong political imagination of his own. But he clearly is not chargeable with self-distrust, and has shown on occasions a tenacity of purpose which does not argue any very facile and receptive judgment. And hence we may hope that he is the kind of man to add nothing of new character to a Conservative Government.