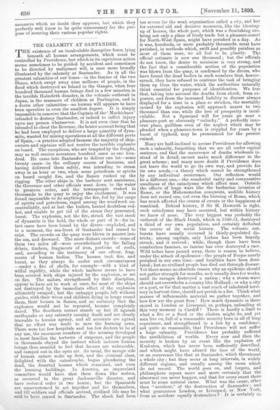 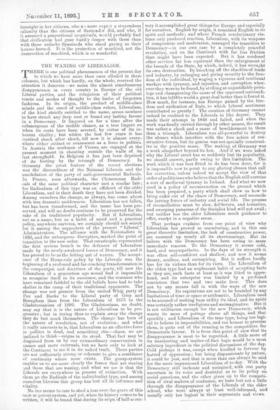 Page 8, 11 November 1893 — THE CALAMITY AT SANTANDER. T HE existence of an incalculable disruptive
Close

THE CALAMITY AT SANTANDER. T HE existence of an incalculable disruptive

force, lying beneath all human arrangements, which must be controlled by Providence, but which in its capricious action seems sometimes to be guided by accident and sometimes to be directed by malignant will, is once more broadly illustrated by the calamity at Santander. As in all the greatest calamities of our times—in the famine of the two Shane, which swept away nine millions of people, in the flood which destroyed an Island in the Ganges, when four hundred thousand human beings died in a few minutes, in the terrible Holmfirth disaster, in the volcanic outbreak in Japan, in the massacre of children at Darlington, and in a dozen other calamities—no human will appears to have been qerative in even the smallest degree. It is simply impossible to conceive that the Captain of the Machichaco intended to destroy Santander, or indeed to inflict injury upon any person whatsoever. It is not even clear that he intended to cheat the Revenue, the better account being that he had been employed to deliver a large quantity of dyna- mite, wanted for mining operations at all the different ports of Spain,—a practice adopted because the majority of ship- owners and captains will not receive the terrible explosive on board. The exceptions, who are tempted by the freight, may as well receive seventeen hundred cases as one hun- dred. He came into Santander to deliver one lot--some twenty cases—in the ordinary course of business, and having delivered them safely, was intending to steam away in an hour or two, when some petroleum or spirits on board caught fire, and the flames rushed up the rigging. The other ships in the harbour sent assistance, the Governor and other officials went down to the water to preserve order, and the townspeople rushed in thousands to the quay to enjoy the excitement. It was found impossible to do anything, the fire, fed by the cargo of spirits and petroleum, raged among the woodwork un- oontrollabIy, and at last the boilers, heated doubtless red- hot, and unable to get rid of the steam they generated, burst. The explosion, not the fire, struck the vast stock of dynamite in the hold, the whole or part of it—for in- tact cases have been found by the divers—exploded, and in a moment, the sea-front of Santander had ceased to exist. The crowds on the quay were blown in masses into the sea, and drowned. The more distant crowds—some of them two miles off—were overwhelmed by the falling debris, timbers, fragments of iron, portions of roofs, and, according to the testimony of one officer, frag- ments of human bodies. The houses took fire, and burnt, as they always do under such circumstances —under a fire of shells, for example—with a kind of wilful rapidity, while the whole harbour seems to have been covered with ships injured by the explosion, or set on fire. The sailors, strengthened by their discipline, appear to have set to work at once, for most of the ships not destroyed by the immediate effect of the explosion ultimately escaped ; but the unhappy people, left without guides, with their wives and children dying in heaps round them, their houses in flames, and no certainty that the explosion would not be repeated, became completely dazed. The Southern nature stands up but ill against earthquake or any calamity causing death and not clearly traceable to human agency, and all accounts are agreed that no effort was made to save the burning town. 'There were too few hospitals and too few doctors to be of any use, the enormous numbers of the missing developed in most families the tortures of suspense, and the people in thousands obeyed the instinct which induces human beings thus assailed to feel that houses are unbearable, and camped out in the open air. As usual, the savage side of human nature woke up first, and the criminal class, delighted with the catastrophe, began plundering the dead, the deserted houses which remained, and even the burning buildings. In America, an improvised committee would have shot them down like wolves, as occurred in the great Jacksonville disaster, and have restored order in two hours ; but' the Spaniards are unaccustomed to act together and for themselves, and till soldiers and officials arrived, civilised life may be said to have ceased in Santander. The shock had been too severe for the weak organisation called a city, and but for external aid and decisive measures, like the blowing- up of houses, the whole port, which was a flourishing one, being not only a place of lively trade but a pleasure-resort for North-West Spain, might have perished in a day. As it was, hundreds, or more probably thousands, must have perished, in methods which, swift and possibly painless as most of them were, we all feel to be ghastly. The official estimate is now one thousand ; but the officials do not know, the desire to minimise is very strong, and the fact that a considerable section of the population was blown from the quay, is confirmed by the divers, who have found the dead bodies in such numbers that, horror- struck, they have refused to continue the task of bringing them up from the water, which the authorities naturally think essential for purposes of identification. We fear that, taking into account the deaths from shock, from ex- posure, and from the increased liability to disease always displayed for a time in a place so stricken, the mortality caused by the explosion will approach nearer to two thousand than one, while the loss of prosperity is incal- culable. Not a Spaniard will for years go near a pleasure-port so obviously "unlucky." A perfectly inno- cent place, guiltless even of the neglect which may be pleaded when a pleasure-town is crippled for years by a burst of typhoid, may be pronounced for the present ruined.

Many are half-inclined to accuse Providence for allowing such a calamity, forgetting that we are all under capital sentence, and that the occurrence of deaths wholesale in- stead of in detail, cannot make much difference in the great scheme; and many more doubt if Providence does not leave the world to go its own way, and provide for its own needs,—a theory which cannot be strengthened by any individual occurrence. Our reflection would be a different one,—the wonderful rarity and comparative smallness of the cataclysms which affect man. Outside the effects of huge wars like the barbarian invasion of Rome, or the Mahommedan conquests, audible history does not record one, not even the burning of Rome, which has much affected the course of events or the happiness of mankind. Behind history, if Sir H. Howorth is right, such cataclysms may have occurred, but within history we know of none. The very biggest was probably the outbreak of the Black Death, which in 1348-51, destroyed a third of our own population, and certainly deflected the course of its social history. The volcanic out- bursts have usually occurred in thinly-populated dis- tricts; among capitals, only Lisbon has been heavily struck, and it revived ; while, though there have been numberless famines, no famine has ever destroyed a race. Wild tribes have passed away, there is reason to believe, under the attack of epidemics—the people of Feejee nearly perished in our own time—and localities have been deso- lated; but no civilised people has died out through disease. Yet there seems no absolute reason why an epidemic should not gather strength for months, as it usually does for weeks, until its ravages destroyed a nation ; why a storm-wave should not overwhelm a country like Holland ; or why a city' or a port, or for that matter a vast reach of inhabited terri- tory in harvest-time, should not perish in afire. Think what masses of inflammable material we gather together, and how few are the great fires ! How much dynamite is there stored. in London or Liverpool, or, perhaps, unloading at this very moment in Cardiff? There is hardly a limit to what a fire or a flood or the cholera might do, and yet men live on, full of a reasonable security born in all of long experience, and strengthened in a few by a confidence, not quite so reasonable, that Providence will not suffer a huge calamity. Providence has probably suffered the annihilation of worlds. Every now and then the security is broken by an event like the explosion of Krakatoa, which has never been sufficiently described, and which might have altered the face of the world, or an occurrence like that at Santander, which threatened a whole city ; but they occur at long intervals, in widely different regions, and usually among the races which do not record. The world goes on, and forgets, and philosophers repeat more and more certainly that the abnormal can never happen, and that for every event there must be some natural cause. What was the cause, other than "accident," of the destruction of Santander ; and what guarantees London, or Liverpool, or New York, from an accident equally destructive ? It is certainly no foresight in her citizens, who n more expect a stupendous calamity than the citizens of San.tandar did, and who, if it assumed it proportional my gnitude, would probably find that civilisation had gone hardly deeper with them than with those unlucky Spaniards who stood gazing as their houses burned. It is the protection of mankind, not the destruction of mankind, which is so wonderful.