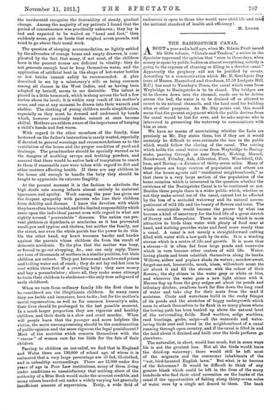 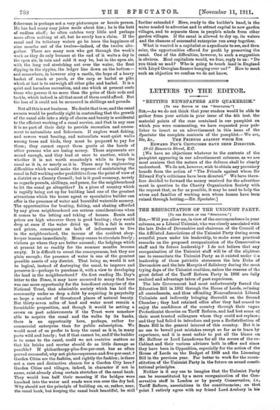 ABOUT a year and a half ago, when Mr. Edwin Pratt issued his little volume, "Canals and Traders," a writer in the Spectator expressed the opinion that "even in these days, when money is spent by public bodies on almost everything, nobody is going to the expense of cleaning or filling in a derelict canal." Apparently the prophecy will not be justified by events. According to a communication which Mr. E. Southgate Day (care of Messrs. Hannaford and Goodman, 57-59 Ludgate Hill, E.C.) has sent to Tuesday's Times, the canal which runs from Weybridge to Basingstoke is to be closed. The bridges are to be thrown down into the channel, roads are to be driven across the bed, the water is to be drained off or allowed to revert to its natural channels, and the land used for building sites or other purposes. As Mr. Day points out, this would mean that the present enjoyment which the public derives from the canal would be lost for ever, and he asks anyone who is interested in preserving the waterway to communicate with him at once.

We have no means of ascertaining whether the facts are precisely as Mr. Day states them, but if they are it would certainly be difficult to over-estimate the loss to the public which would follow the closing of the canal. The cutting which holds the canal water runs from Weybridge to Basing- stoke, passing through or near Byfleet, Woking, Horsell, Brookwood, Frimley, Ash, Aldershot, Fleet, Winchfield, Odi- ham, and Basing—a distance of thirty-seven miles. Many of these places are large centres of population and others are what the house agents call " residential neighbourhoods," so that there is a very large section of the population of the home counties which is interested in the question whether the existence of the Basingstoke Canal is to be continued or not. Besides these people there is a wider public which, whether or not they make actual use of the canal, cannot but be affected by the loss of a secluded waterway and its natural accom- paniment of wild life and the beauty of flowers and trees. The whole countryside would become the poorer by what has become a kind of sanctuary for the bird life of a great stretch of Surrey and Hampshire. There is nothing which is more attractive to birds than water with plenty of food near at hand, and nothing provides water and food more surely than a canal. A canal is not merely a straightforward cutting filled with water with a tow-path by its side. It is a winding stream which is a centre of life and growth. It is more than a stream—it is often fed from large ponds and reservoirs which in turn become other centres of wild life. Water. loving plants and trees establish themselves along its banks. Willows, alders and poplars shade its waters ; meadow-sweet, forget-me-not, loosestrife, musk, irises, willowherb scent the air about it and fill the stream with the colour of their flowers ; the sky shines in the water grey or white or blue, and wherever the water goes a new light shines with it. Herons flap up from the grey sedges set about its ponds and tributary ditches; swallows hawk for flies down the long road of water and take clay for their nests from the mud it moistens. Coots and waterhens build in the rushy fringes

of its ponds and the stretches of boggy undergrowth which seem to attach themselves to its flank in so many places where the towing path has been banked up above the natural level of the surrounding fields. Reed warblers, sedge warblera, reed buntings, grebe, snipe—all the waterside and water- loving birds nest and breed in the neighbourhood of a canal running through open country, and if the canal is filled in and the land about it drained and built over the birds perforce go elsewhere.

The naturalist, in short, would lose much, but in some ways his is not the greatest loss. Not all the birds would leave the dried-up waterway ; there would still be left most of the migrants and the commoner inhabitants of the " wet, bird-haunted English lawn." But what is to become of the fisherman? It would be difficult to think of any greater blank which could be left in the lives of the many hundreds who find their chief recreation on the banks of the canal if the opportunities of fishing along thirty-seven miles of water were by a single act denied to them. The bank

fisherman is perhaps not a very picturesque or heroic person. Ile has had many easy jokes made about him ; he is the butt of endless chaff; he often catches very little and perhaps more often nothing at all, but he surely has a claim. If the canal and its tributary waters go he loses the happiness of nine months out of the twelve—indeed, of the twelve alto- gether. There are many men who get through the week's work as they do only because at the end of it waits a day in the open air, in rain and cold it may be, but in the open air, with the long rod stretching out over the water, the float dipping in the ripples, the ledger line down on the bottom— and somewhere, in however airy a castle, the hope of a heavy basket of roach or perch, or the carp or barbel or pike which at last is to outweigh all other pike and barbel. It is a quiet and harmless recreation, and one which at present costs those who pursue it no more than the price of their rods and tackle, which indeed is all that most of them could afford. But the loss of it could not be measured in shillings and pounds.

But all this is not business. No doubt that is so, and the canal owners would be perfectly right in contending that the growth of the canal side into a strip of charm and beauty is accidental to the efficient working of a canal service, and that in any case it is no part of their duty to provide recreation and amuse- ment to naturalists and fishermen. If anglers want fishing, and rowers want boating, and naturalists want quiet walks among trees and birds, they must be prepared to pay for them ; they cannot expect them gratis at the hands of other persons who are losing money. Those arguments are sound enough, and they lead at once to another, which is whether it is not worth somebody's while to keep the canal as it is, or nearly as it is. There may be engineering difficulties which would make the expense of maintaining the canal in full working order prohibitive from the point of view of a district or a County Council; but is it good economy, merely as regards pounds, shillings, and pence, for the neighbourhood to let the canal go altogether? In a piece of country which is rapidly being cut up for building land one of the greatest attractions which the house agent or speculative builder can offer is the presence of water and beautiful waterside scenery. The opportunities for boating, fishing, and skating afforded by any given neighbourhood are serious considerations when it comes to the letting and taking of houses. Rents and prices are high wherever there is good boating ; they would drop at once if the water dried up. With a fall in rents and prices, consequent on lack of inducement to live in the neighbourhood, the income of the resident shop- keeper lessens immediately. Money ceases to circulate freely ; visitors go where they are better amused; the lodgings which at present let so readily for the summer months become empty. It is difficult to count the consequences, but they are plain enough; the presence of water is one of the greatest possible assets of any district. That being so, would it not be logical, instead of destroying the canal, to improve and preserve it—perhaps to purchase it, with a view to developing the land in the neighbourhood P On first reading Mr. Day's letter to the Times, it may have occurred to many that here was one more opportunity for the beneficent enterprise of the National Trust, that admirable society which has laid the community under so deep a debt by acquiring in perpetuity so large a number of threatened places of natural beauty. But thirty-seven miles of land and water must remain a formidable proposition, and though it would be setting a crown on past achievements if the Trust were somehow able to acquire the canal and the walks by its banks, there is an opportunity here, perhaps, rather for commercial enterprise than for public subscription. We would most of us prefer to keep the canal as it is, in many parts wild and lonely ; but if that cannot be, and if the builder is to come to the canal, could we not contrive matters so that his bricks and mortar should do as little damage as possible ? If philanthropy-plus-five-per-cent. has so often proved successful, why not picturesqueness-and-five-per-cent. P Garden Cities are the fashion, and rightly the fashion; is there not a rare and distinctive chance for a Garden City here P Garden Cities and villages, indeed, in character if not in name, exist already along certain stretches of the canal bank. They would lose half their meaning if the bridges were knocked into the water and roads were run over the dry bed. Why should not the principle of building on, or, rather, near, the canal bank, but keeping the canal bank beautiful, be still

further extended P Here, ready to the builder's hand, is the water needed to advertise and to attract capital to new garden villages, and to separate them in people's minds from other garden villages. If the canal is allowed to dry up, its waters and the chances of successful enterprise run away together.

What is wanted is a capitalist or a syndicate to see, and then seize, the opportunities offered for profit by preserving the canal. One of the difficulties, however, to such a suggestion is obvious. Most capitalists would, we fear, reply to us : "Do you think us mad ? Who is going to touch land in England with Lloyd Georgian finance banging over us ? " How to meet such an objection we confess we do not know.