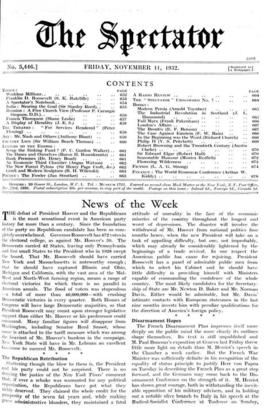 Page 1, 11 November 1932 — The Republican Retribution Shattering though the blow to them is,
Close

The Republican Retribution Shattering though the blow to them is,

the President and his party could not be surprised. There is no denying the justice of the New York Times' comment that, if ever a rebuke was warranted for any political organization, the Republicans have got what they richly deserved. They claimed the whole. credit for the Prosperity of the seven fat years and, while making grave administrative blunders, they maintained a fatal attitude of unreality in the face of the economic miseries of the country throughout the longest and worst of depressions. The disaster will involve the withdrawal of Mr. Hoover from national politics four months hence, when the new President will take on a task of appalling difficulty, but one, not improbably, which may already be considerably lightened by the beginnings of a trade revival. In one respect the American public has cause for rejoicing. President Roosevelt has a panel of admirable public ..men from which to select his Cabinet and he should have little difficulty in providing himself with Ministers capable of commanding the confidence of the whole country. The most likely candidates for the Secretary. ship of State are Mr. Newton D. Baker and Mr. Norman Davis. Either would be admirable, but Mr. Davis' intimate contacts with European statesmen in the last nine months invests him with peculiar qualifications for the direction of America's foreign policy.